No, this election did not reaffirm Climate Change policy - it emphasized how far apart Americans are 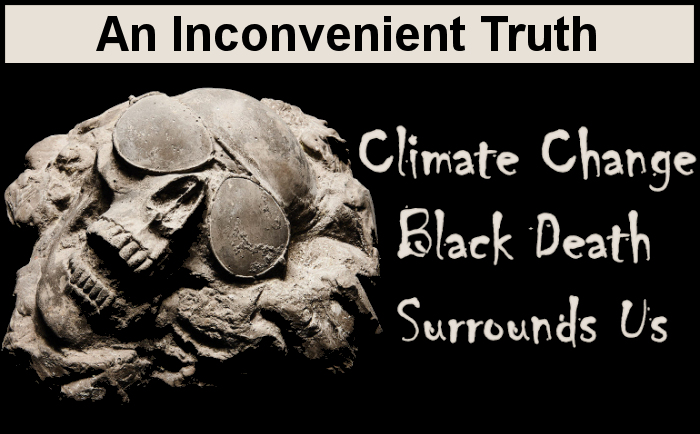 “Joe Biden’s win ratifies what’s been clear all along: despite Trump’s best efforts, the American people have remained committed to the Paris agreement. Business, investors, cities, and states redoubled their efforts to solve the climate crisis, proving that the path to a sustainable economy is inevitable,” said former vice president Al Gore in a statement Saturday.

On Monday the The Washington Post notified us that Trump officials rush to auction off rights to Arctic National Wildlife Refuge before Biden can block it.

President-elect Joe Biden has indicated that he will be undoing the Trump Executive Orders that reversed many U.S. Climate Change policies, such as withdrawing from the Paris Agreement.

Of course, Climate Action Tracker, a research project, projects that current Paris Agreement policies and pledges will leave the planet “well above” the Paris accord’s “long-term temperature goal.” Even with the U.S. involved, academics were concerned that the world was headed for “extensive” species extinctions, serious crop damage and irreversible increases in sea levels.

Trump called the Paris Agreement “a total disaster for our country” that would hurt American competitiveness by enabling “a giant transfer of American wealth to foreign nations that are responsible for most of the word’s pollution.” He says rules and directives put in place by his predecessor, Barack Obama, to meet the U.S. targets for emissions hurt the U.S. economy by killing jobs related to fossil fuels, especially coal mining. And he’s dismantled Obama-era regulations meant to stifle greenhouse gas emissions from power plants, automobiles and oil wells.

During the Trump Administration coal company executives have successfully advocated for rollbacks of more than 15 different environmental rules and protections. These wide-ranging rollbacks include actions repealing and replacing the Clean Power Plan and slashing the EPA’s budget and staff numbers.

In case someone didn't notice, nearly half of Americans voted for Trump. And, unless by some miracle the Democrats win both Georgia Senate seats in January, current U.S. Senate Majority Leader Mitch McConnell will continue to control the Senate as he was reelected for six years with 57.8% of the vote.

He's from Kentucky, a coal state.

Barrasso was not up for reelection but is acutely aware that conservative Republican Cynthia Marie Lummis Wiederspahn won Wyoming's other Senate seat with 73.1% of the vote.

Capito was up for reelection and won with 70.4% of the vote.

The two committees they probably will chair have say over whom Biden puts in top-level positions at the EPA and other agencies plus can make Biden's life difficult on achieving his goals to “transition” away from using oil and reduce or eliminate fossil fuel subsidies.

But we all know he will have strong support from a super-majority of Americans, right? I've seen headlines saying that. Of course even that isn't quite so simple. Consider this chart: 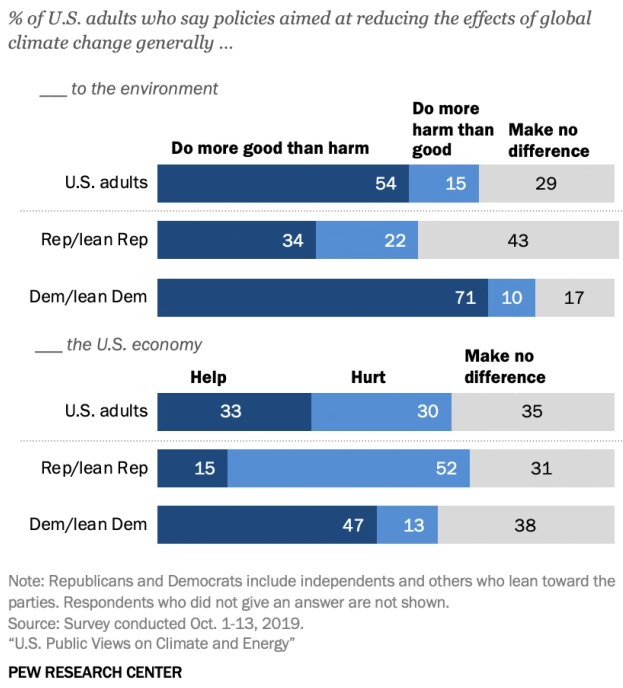 Half of Americans do recognize that moderating human induced Climate Change (Global Warming) will do good things. But do they recognize that it would require behavior modification, a fact not included in the survey? This "favorable" half of respondents includes:

The other half appears to includes:

As noted in a post here in June 2019 U.S. Secretary of State Mike Pompeo explains the conservative "old deal" to address Climate Change:

[U.S. Secretary of State Mike] Pompeo explained that we Americans will... ...instead of developing governmental policy as suggested in House Resolution 109 - Recognizing the duty of the Federal Government to create a Green New Deal and creating the bureaucracy needed to implement it.

Is Pompeo correct in his assumptions?

Perhaps we need to recognize context in which the Pew Survey was conducted. Americans have diddled around with electric cars while increasing manufacturing of gas guzzling vehicles. Californians have substantially increased solar and wind energy production while increasing consumption of electricity way beyond that production.

Interestingly, the Covid pandemic has reduced some consumption and a lot of driving. One could offer the idea that we could build on those gains as the pandemic effects decline. But that is a supposition offered in a severely stressed economy.

Perhaps we need to restate what Pompeo asserted. In response to Climate Change in the future individual Americans and their families will out of necessity...

Will American families rely on future technological innovation to deal with the impacts of Climate Change? Most assuredly. They already are, though much of what is available is expensive forcing many to divert their income to keep their homes livable.

Al Gore tells us that business, investors, cities, and states have redoubled their efforts to solve the climate crisis. What he also tells us is that the path to a sustainable economy will be an inevitable outcome of the changes required to solve the climate crisis. So I guess he still believes that Americans will responsively reorganize our society to deal with Climate Change impacts, even though he has been advocating for significant changes since the mid-1970's.

In fact, except for excluding any significant change in governmental policy and bureaucracy, Gore and Pompeo agree.

I'm not sure what we can learn from the Saturday story Garbage, duck feces and continued water woes for flooded South Florida in which is the quote from a resident: “I’ve never seen anything like this before. My home got flooded with water, poop — it’s just horrible.”

The warnings have been made. In September 2019 Bloomberg reported:

The Great Climate Retreat is beginning with tiny steps, like taxpayer buyouts for homeowners in flood-prone areas from Staten Island, New York, to Houston and New Orleans — and now Rittel’s Marathon Key. Florida, the state with the most people and real estate at risk, is just starting to buy homes, wrecked or not, and bulldoze them to clear a path for swelling seas before whole neighborhoods get wiped off the map.
By the end of the century, 13 million Americans will need to move just because of rising sea levels, at a cost of $1 million each, according to Florida State University demographer Mathew Haeur, who studies climate migration.

If you read the article, you will learn that some government funding has been focused on homeowner relocation costs. But this does not address issues such as extreme heat in the Southwest or burning forests across the U.S.

The problem for Biden is that when you look at the election results and Climate Change surveys honestly, Americans are not ready for the inevitable Climate Change impacts. We're still struggling with the economic impacts of technology - no, not the presence of Alexa in many homes, rather the fact that a large number of Americans can't afford Alexa. Or even a high speed internet connection in many cases.

To put it another way, there are two Americas, as we learned in the last two Presidential elections. And they don't follow the same web sites. Nor do they hold the same opinions about Climate Change.


This post is a reflection of concerns that began in 2007 when it appeared the Gray Whale migration route was being explored for wind generation by "environmentalists".