Yesterday an opinion piece headlined Climate Change Is Not World War appeared in The New York Times written by Roy Scranton, author of “Learning to Die in the Anthropocene” and “Total Mobilization: World War II and American Literature”.
It was enlightening, perhaps shocking, to this writer that Scranton it was necessary to explain to the advocates of the Green New Deal in Congress what "total mobilization" really meant in WWII all of which leads to his conclusion:


Nevertheless, total mobilization may be our only hope. Ecological collapse is happening all around us. We may be nearing or have already crossed the line where it becomes unstoppable. Piecemeal, consensus-driven, incrementalist solutions are tantamount to global suicide. According to a summary paper last year from leading scientists on global climate trajectories, the changes needed to stabilize the earth’s climate “require a fundamental reorientation and restructuring of national and international institutions.”
Such a program would be another order of magnitude larger and more complex than America’s military mobilization during World War II. The problem of climate change is bigger than the New Deal. It’s bigger than the Great Depression. It’s bigger than war. The problem of climate change is the problem of how and whether human beings can live together sustainably on this planet.
What would total mobilization really mean? Judging from what happened in World War II, it would mean social upheaval, violence, censorship, curtailed freedoms, dubious compromises and radical changes in American culture and politics. Yet it also just might mean the survival of human civilization.

I read this just after completing the previous post here On behalf of the kids - climate scientests quit being conservative as the adults aren't fearful enough in which I noted from a BBC report that Petteri Taalas, the secretary-general of the World Meteorological Organization (WMO) and advocate for toning down anything scary about Climate Change, said: "When I was young we were afraid of nuclear war. We seriously thought it’s better not to have children."

The fact is it would take a direct action by a few specific human beings in a moment of time to cause such a nuclear war. In contrast, Climate Change is the result of the behavior of all the humans in Western Civilization of the past century, behavior that is continuing.

Frankly, I failed to recognize that people really think Climate Change can be addressed in some sort of "mobilization" akin to what was done in WWII when the country was faced with foreign human enemies. As Scranton noted "what’s required today is a global mobilization against an international economic system: carbon-fueled capitalism." It would require us "to unify and mobilize the entire industrialized world  against itself."

When Al Gore (co-recipient of the 2007 Nobel Peace Prize with the Intergovernmental Panel on Climate Change) in 1976 held the first congressional hearings on the climate change, and co-sponsored hearings on toxic waste and global warming, there was an opportunity to begin a process that by 2020 would have significantly limited the impacts of Climate Change in the 21st Century.

Today we have absolutely no chance to do that as explained here in The coming Climate Change Black Death. If only humanity knew in advance what was coming and that something could be done about it! Oh, wait.....

The economic disruption alone will be catastrophic. It's "the little things" one might notice at first. For instance, here in California we've had a decade of gradually expanding disastrous wildfire losses. For those directly affected the losses were tragic.

But broader economic effects are being felt this year. What seems to individuals like "suddenly" the insurance companies are cutting their risk by not renewing homeowners' insurance policies. Over the next decade this will start the disruption of the economic viability of many communities which have not experienced losses similar to that of Paradise, California. 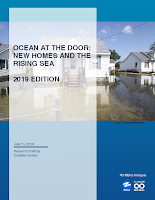 Click to Download Report
The same economic disruption process will occur along the U.S. coastlines - the Atlantic, the Gulf of Mexico, and the Pacific - due to a combination of the sea level rise and more severe storms. The report to the left already lays out problematic real estate areas. Yet most Americans don't even know the report exists.

Obviously, those whose homes have already been washed away are aware there is a problem. The other folks, however, are in denial. And yet, resources are available to begin the process of extracting your family from the most disruption. Click on the map below to access one source of information. 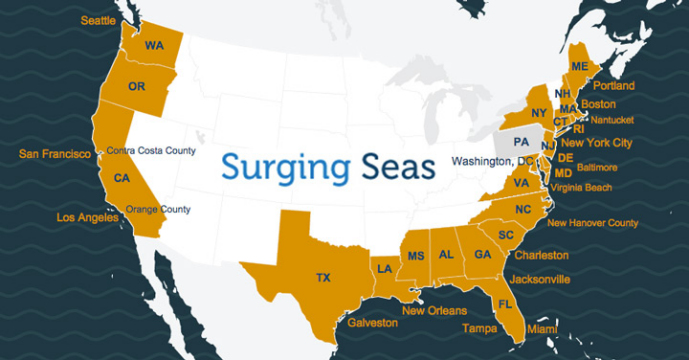 This is only the beginning. I hate repeating myself, but I will. Make no mistake about the Climate Change disruption. It's happening in this century, it has started to cause economic dislocation around the world and will increase disease, warfare, crime, popular revolt, waves of religious bigotry, and persecution. At a minimum it will result in the deaths of 20%± of the world's population (800,000,000± people).

Climate Change will be the 21st Century equivalent of the Black Death.

The progressive thing about it is that in the coming decades it will disrupt the lives of, and kill, without regard to nationality, ethnicity, race, sex, age, sexual preference, or even wealth - you know, the issues that American liberals have used to create headlines.

Right now we are roughly at a similar point in time for limiting 22nd Century impacts that we were in 1976 when Al Gore began his advocacy with regard to the 21st Century.

In terms of reducing the impact in the 22nd Century, as Scranton noted:


While many supporters voice the need for revolutionary change to face the existential challenge climate change poses, the fact is that climate change is just one of several progressive concerns. Democrats show a profound lack of unity on whether climate change should come before economic justice, racial justice, revitalizing American democracy, labor rights, immigration reform, health care and gun control.
Campaign promises that we can fix everything at once are sheer pabulum; real legislation requires real priorities, compromises, and sacrifices. In seeking support from Southern Democrats for his efforts to mobilize for war, for example, Roosevelt left Jim Crow segregation untouched, even while his administration was drafting black men into the military. What similar compromises would modern-day Democrats be willing to make?

The real issue is still the same. Greed. And while sure, corporations are the PR face of the problem, consider this. The first handheld cellular mobile phone was demonstrated by John F. Mitchell and Martin Cooper of Motorola in 1973, using a handset weighing 4.4 pounds. Up to that point in time, we all lived comfortably with land-line phones, most of which were years (decades?) old.

Today, way too many people can't seem to live two years without buying a new "smart" phone. The problem is, those smart phones in the quantities manufactured and sold around the world are significant sources of pollutants related to Climate Change.

If it is the latter, forget limiting Climate Change. But we should remind ourselves about this each time we pick up our smart phones.