The first two posts here were Limited Time Only - Act now to own your piece of the ocean off the Mendocino Coast and FERC Ponders Allowing Public Input, Environmental Review of Proposal for Electrical Generators in Whale Route as I was rather aghast at the apparent governmental effort to facilitate wave power facilities construction along the U.S. Pacific Coast.

As I pointed out, unlike the areas off Europe and Britain, the entire U.S. Pacific Coast is the migration route for the Gray Whale: 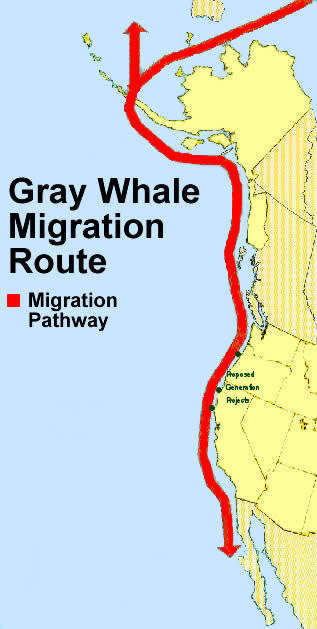 It appeared that the wave energy efforts by PG&E and others came to a halt, though it took a couple of years. But apparently that did not discourage the Obama Administration.

Lo and behold, the Obama Administration is back advocating it again according to a Silicon Valley Mercury News article (classified as an article on green energy):


A new report by the Department of Energy says that waves off California's 1,100-mile coastline could generate more than 140 terawatt hours of electricity a year -- enough to power 14 million homes -- if tidal and wave energy was developed to its maximum potential.

When you look at the article - and the report it refers to - you discover that government engineers sound like the nuclear power engineers of the 1950's, in this case all focused on how to get electricity to support the systems and customers of Apple and Intel by building electromagnetic energy generation facilities in the survival path of a species the U.S. spends a great deal of time pretending it cares about.

They even provide an interactive map which indicates where wave power energy generators should be built: 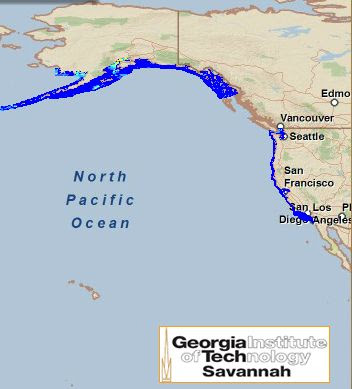 This doesn't surprise me. As I've pointed out before, there is a core disconnect between what the Obama Administration says (and probably believes) versus the permanent-job producing potential of the tech economy. As I noted in 2009:


Californian's already know that most of those nifty high-paying technology jobs created between 1985 and 2005 have gone to people making half or less located in other countries and other states. But they keep hearing that the green revolution partly funded by the Obama stimulus bill will be the source of California's magical economy engine.

But we still keep seeing the heavy influence of the international technology corporations in the supposedly-progressive Obama Administration as I explained on February 22, 2011 offering extensive supporting detail:


This week it was announced that President Obama will appoint Intel CEO Paul Otellini to join GE's CEO Jeffry Immelt on the Council on Jobs and Competitiveness.

President Obama has spent a lot of time with Silicon Valley corporate chiefs. This week he spent more time with them. In fact, the LA Times reported:

Obama's visit was, however, also a reminder that the political stereotypes that California conveys are not just divided between movie star-rich Southern California and the hippie-liberal north. Silicon Valley has its own connotation, of magical inventions spawned in garages or college dorms, of American enterprise.

It was that spirit that Obama sought as his own last week, even if largely out of view. He landed Thursday night, but only his arrival and his departure Friday morning from San Francisco were public events.

Despite all the factual evidence to the contrary, based on what he says and based on the policies he has allowed to be implemented or continued during his administration, Obama appears to believe that technology oriented international corporations are going to replace the 7 million jobs lost nationwide since 2008, if only we'd just educate another 7 million engineers, biologists, and lab technicians using money from the working poor, or at least any source other than the technology corporations like Intel.

Intel, headquartered in Santa Clara was founded in 1968. By the end of the 1990s, Intel was one of the largest and most successful businesses in the world. But Intel's employment in the Silicon Valley area has been cut drastically. It shut it's last Silicon Valley manufacturing plant in 2009.

I simply don't understand why the Obama Administration is so tied to these multinational corporations.

And I don't understand why anyone thinks wave energy projects are green energy! Just ask the Gray Whales what they think.
Posted by Michael O'Faolain - at 4:55 PM