Northern California is on fire 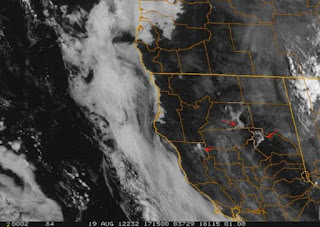 While we have our normal late Summer fog, much of Northern California is more than a bit smokey. The red arrows in the satellite picture from this morning point to smoke plumes from three major fires (plus others are visible) (click on picture for larger version).

The fire at the right east of Chico, California: Chips Fire inches closer to Seneca.

The new fire at the left in our own Mendocino County: Wildfire burning near Covelo grows overnight.

CALFIRE maintains a web site summarizing incidents in California with links to a few more details.

Why is this happening? How about Climate Change! It's already impacting us and we are not prepared.
Posted by Michael O'Faolain - at 12:18 PM No comments: