In a series of posts here grouped under climate change black death surrounds us both news and context regarding Climate Change have been offered. We continue now with new reports.

This past week news stories told us that the United Kingdom Parliament officially declared an environment and climate emergency in response to the month long protests of school climate strikers and the environmental group Extinction Rebellion.

Symbolically, this is seen as hopeful. After all, the Industrial Revolutions (see list to Wikipedia links at right) began in the late 1700s when British inventor James Watt fed blocks of coal into a steam-engine boiler, catapulting Great Britain into a global power and humanity into the carbon spewing species.

Now, of course, we realize that beginning 400 years ago in Britain we set a 500-year course to leave behind to our descendants some 100 years from now what will be, for a large majority of species including humans, an uninhabitable planet.

For over centuries fossil fuels of multiple types were used to make the world an economically better place to live ...well, Western Europe and North America plus on average the rest of the world.

And, of course, the new Parliamentary measure which supposedly demonstrates the will of the British House of Commons to change that course
Labour Party leader Jeremy Corbyn led the motion process. Responding for the Conservative Party government, the environment secretary, Conservative Michael Gove indicated a shared concern about something. According to The Guardian:


Gove, in response, said he shared the same broad ideas: “Not only do I welcome the opportunity that this debate provides, I also want to make it clear that on this side of the house we recognise that the situation we face is an emergency. It is a crisis, it is a threat, that all of us have to unite to meet.”
There was, Gove argued, “a green thread of ambition running through Conservative governments”.
However, when the Green MP Caroline Lucas intervened in the speech to ask how that approach could be reconciled with the government’s decision to back a third runway at Heathrow airport, Gove did not reply, prompting shouts from MPs of “Answer the question.”
Gove said it was wrong “to say that any one party in this house has a monopoly of virtue.” He said: “Let’s try to ensure that we have a civilised debate that combines a sense of urgency about the challenge in front of us and a determination to take action in the future.”
Gove promised to challenge Trump and other world leaders on climate inaction, saying he hoped to discuss the issue with the US president during his forthcoming state visit to the UK: “I want to make it clear to him that as the world’s biggest polluter he has to take responsibility.”

In other words, in the face of near rebellion by the generation that will suffer Climate Change impacts the most, Britain's democratic government reacknowledged the existence of the Climate Change problem, an acknowledgement already formalized on April 22, 2016, when it ratified the The Paris Agreement.

Of course, Britain will
As noted here previously, the Trump Administration has already acknowledged America's share of the responsibility in a U.S. Environmental Protection Agency (EPA) and the U.S. Department of Energy (DOE) Environmental Impact Statement that states that severe Climate Change is inevitable. And the U.S. military is officially and actively focused on dealing future catastrophic impacts of Climate Change on U.S. military facilities. (We've also noted that China has acknowledge that inevitability.)

The behavior of Trump and most Americans in the face of Climate Change is, of course, all about the continued need for fossil fuels (and steak

) to continue U.S. economic expansion and more iPhone use.

If you have followed the news about the Trump Administration's policy changes regarding oil drilling - permitting it along coastlines which has been sidelined until after the 2020 election, additional drilling in the Arctic offshore areas and Alaska's National Wildlife Refuge, large increases in drilling permits in federal lands, etc. - you might discover that Trump has a fixation on the pivotal role of fossil fuels in the economy.

For instance, of key importance to Trump's reelection is the problem of increasing oil prices. That concern is based on a reality - those GenX and older Americans who commute, those Americans who use devices, and those Millennial and younger Americans who are flocking to cities, all have contributed to huge increases in demand for fossil fuels. Contrary to popular belief, the huge 21st Century expansion in solar and wind energy production in the U.S. has  been offset by a greater increase in energy use.

For an old person, one of the more curious facts explained by David Wallace-Wells in his The Uninhabitable Earth: Life After Warming, (the book all Americans who think they care about and are doing something about the environment and/or Climate Change should read) is:


Five years ago, hardly anyone outside the darkest corners of the internet had even heard of Bitcoin; today mining it consumes more electricity than is generated by all the world’s solar panels combined, which means that in just a few years we’ve assembled, out of distrust of one another and the nations behind “fiat currencies,” a program to wipe out the gains of several long, hard generations of green energy innovation.

Another of the more curious facts he explains is:


Cities, where the world will overwhelmingly live in the near future, only magnify the problem of high temperature. Asphalt and concrete and everything else that makes a city dense....


"Market forces have delivered cheaper and more widely available green energy, but the same market forces have absorbed those innovations, which is to say profited from them, while continuing to grow emissions.


If the average American were confined by the carbon footprint of her European counterpart, U.S. carbon emissions would fall by more than half. If the world’s richest 10 percent were limited to that same footprint, global emissions would fall by a third. And why shouldn’t they be? Almost as a prophylactic against climate guilt, as the news from science has grown bleaker, Western liberals have comforted themselves by contorting their own consumption patterns into performances of moral or environmental purity—less beef, more Teslas, fewer transatlantic flights. But the climate calculus is such that individual lifestyle choices do not add up to much, unless they are scaled by politics.

If you use the internet - and since you're reading this you are using the internet - you might want to consider the February update article linked below: 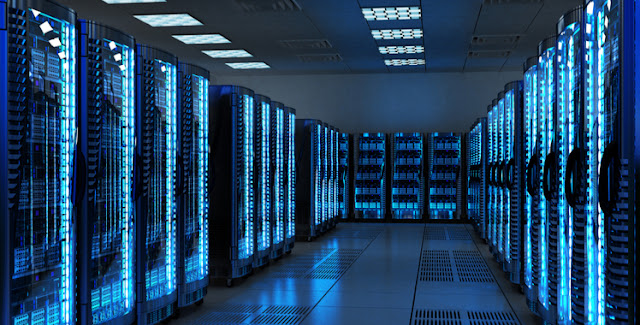 Perhaps that gives just a hint of why keeping fossil fuel prices low is important to you and I, internet users.

We all sort of know this. Nonetheless, a 1,500-page U.N. report approved by representatives from the United States, Britain, and 130 other countries, was released this Monday in Paris telling us (again) that we humans are transforming Earth’s environment so significantly that 1,000,000± plant and animal species are facing extinction. That extinction is a dire threat to ecosystems that people depend on for their survival.

The report was compiled by hundreds of international experts and based on thousands of scientific studies which, if the environment is a concern, you probably already learned about on your lithium-powered device months or even years ago.

Sandra Díaz of Argentina, Professor of Community and Ecosystem Ecology at Córdoba National University a co-chair of the global assessment, noted for the press: "Biodiversity and nature's contributions to people are our common heritage and humanity's most important life-supporting 'safety net.' But our safety net is stretched almost to breaking point."

What safety net? The United States and China have already said we have no safety net because we humans, as noted for the record by the British House of Commons, reserve the right to engage in future "civilised debate" on Climate Change matters settled in the scientific community at least three decades ago, an activity otherwise known as "fiddling while Rome burns."

Which brings us to the ultimate question about what a privileged life accords ordinary Americans and Western Europeans. Consider this story in the Los Angeles Times (click on image below to link to full story): 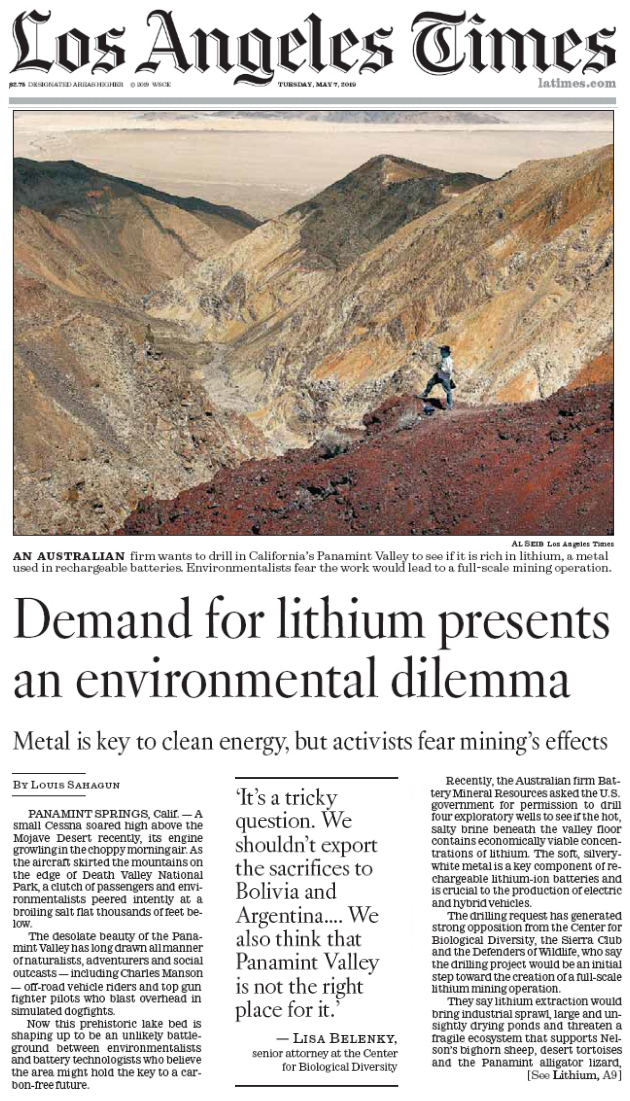 The story came with a video that offers strong emphasis on a simple fact - in America every issue is separate.


A request to drill for lithium near Death Valley National Park
has alarmed environmentalists, who say mining the metal is
unacceptable, even if it is an essential ingredient in the pro-
duction of zero-emission electric vehicles.

Lithium is just one of the materials in batteries we all depend upon to power our plethora of 21st Century devices folks didn't "need" prior to the last months of the 20th Century.

We intend to expand the use of batteries to combat Climate Change. You see we've decided that a low-carbon economy will require batteries installed in homes and businesses that will account for 57% of the world’s energy storage capacity by 2040, in addition to more and more devices. However we feel about Climate Change we have no intention of being confined to the energy use of even our European counterparts.

Yes, the hugely expanded use of raw materials such as lithium, nickel, manganese, colbalt and graphite already incur enormous human and environmental costs. But we need them to protect humans and the environment by chit-chatting instantly with others.

There are those that say we could significantly eliminate the human and environmental costs by recycling the materials. But heck, we can't even get the Chinese to continue to recycle our plastics for us. So it shouldn't be a surprise that on our own we are unlikely to achieve any significant level of recycling of battery materials.

The truth is, we haven't even begun to compare the very real environmental costs of battery-based alternative energy. We call it solar and wind which are available only when the Sun is out or the wind is blowing. But we need energy 24/7. So we store the energy in batteries. Will stored energy be worse or better for the environment than energy generated by natural gas? Might it not be better if only we would pay say 4 times what we do now for electricity? What do we really know other than we - all Americans regardless of political view - are the most wasteful, destructive organism subset on the planet?