In a series of posts here grouped under climate change black death surrounds us both news and context regarding Climate Change have been offered. We continue now with new reports from March.

In March we read Ruined crops, salty soil: How rising seas are poisoning North Carolina’s farmland and 'We Will Miss the Warm Winters.' Retirees Are Fleeing Florida as Climate Change Threatens Their Financial Future.

But more direct human pain is resulting from Severe Midwest flooding could last all spring while Cyclone Idai Destroys ‘Ninety Percent’ of a City of Half a Million in Southern Africa along with Harrowing scenes after Cyclone Idai with inland ocean visible from outer space. These two disasters are significantly disrupting lives of thousands of people, many of whom will migrate elsewhere altering communities elsewhere.

This is the reality of climate change. We need to mention two articles in the April 1 edition of The New Yorker, one representing new reporting by Elizabeth Kolbert on Lousiana's sinking lands and the other a review of a new book providing some context “Nature’s Mutiny: How the Little Ice Age of the Long Seventeenth Century Transformed the West and Shaped the Present” by German-born, Vienna-based historian Philipp Blom who discusses the complex relationship between the social, economic, and intellectual disruption caused by the changed climate in the period from 1570 to 1710 known as the Little Ice Age. Both articles are worth reading and perhaps the book would give solid perspective on the future. 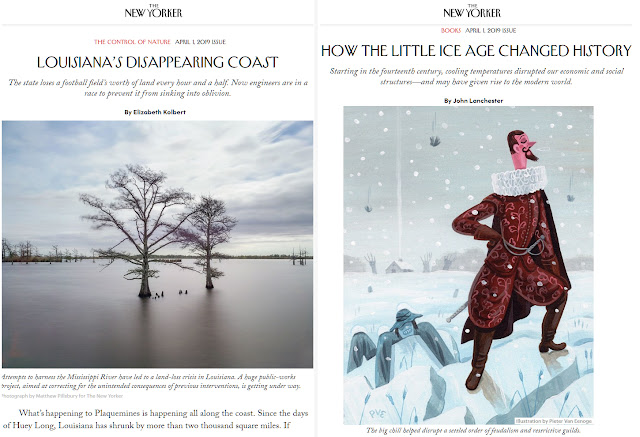 Kolbert's extensive reporting has been explored in this blog. But the following from the post In California we are overcoming words that blind and bind by discussing biosphere science needs to be repeated:


In her recent update to Field Notes she told us all (emphasis added):


In the years since I wrote this book I’ve been asked hundreds of variations on the question: “What should I do?” What people seem to be looking for is both advice on concrete actions they can take and the assurance that what they do will make a difference. Given the paralysis of the political system, the time lag built into the climate system, and the high likelihood that the threshold of DAI [dangerous anthropogenic interference] has now been crossed, it’s difficult to offer such assurances. We have already changed the world dramatically, indeed quite probably catastrophically. But even when it comes to catastrophe, distinctions can be made. What we choose to do—or not to do—in the coming decades will determine the future both for our own kind and for the millions of other species with whom we share this planet. It is possible that we could still limit warming to around two degrees Celsius, and it is also possible that we could lock in warming of six degrees Celsius or more. These two possibilities represent radically different worlds.

For clarity, "dangerous anthropogenic interference" means that within a period of less than a 100 years we humans screwed up the self-regulating mechanisms of the biosphere to an irremediable level.

Perhaps it is because she has hung around scientists too long, but in this case Kolbert, who is a master wordsmith and whose two books are the best reporting available on the subjects of regional climate change impacts, still used probability wording - "the high likelihood that the threshold of DAI has now been crossed." A more accurate way of saying it is "the threshold of DAI was crossed sometime early in this Millennium." To put it in perspective, looking back from the year 2116 folks will be correct when they say that on one date in the 20 years between 1995 and 2015 the threshold of DAI was crossed.

And that's what most too many Americans still don't get - by 2066 the number of natural disasters - massive hurricanes, flooding, drought-caused water shortages, and wildfires - will have reached significantly disruptive proportions for many. "Significantly disruptive" in many cases will mean catastrophic locally in some areas by 1950's standards.

Kolbert's new article is excellent reporting on what's happening along the Louisiana coastline. But the book reviewed provides a feeling for what happens to human civilization when the climate changes as significantly as it did in the period 1570-1710 - though perhaps not as radically as it likely will in the period of 1970-2110.

Back then, as now, the effects were world world-wide. Europe saw the collapse of the Middle Ages. In China, already the most populous country in the world, such events such as erratic harvests caused the Ming dynasty to collapse in 1644.

And back then the temperature change was a 2ºC decrease. This time it will be a 4ºC± increase. Let us quote from that same prior post:


Under the direction of the Trump Administration the National Highway Traffic Safety Administration (NHTSA) with the cooperation of the U.S. Environmental Protection Agency (EPA) and the U.S. Department of Energy (DOE) issued a Draft Environmental Impact Statement (DEIS) for the Safer Affordable Fuel-Efficient (SAFE) Vehicles Rule for Model Year 2021–2026 Passenger Cars and Light Trucks proposing reduced average fuel economy standards for those vehicles.

The DEIS has determined that the draft official policy of the United States government will be acceptance of a near worst case scenario, a 4.387°C (7.876°F) global temperature rise since 1880 by 2100. That is because any lesser scenario would require deep cuts in carbon emissions to avoid this drastic warming. A lesser scenario “would require substantial increases in technology innovation and adoption compared to today’s levels...which is not currently technologically feasible or economically feasible.”

Take it from someone who has prepared similar such documents - that DEIS is a thorough document.

One might wish to claim that if the Trump Administration would just get on board, things might be different. But in China, home to the world's second largest (and sooner or later, largest) economy, the same conclusion was reached.

In May a collaborative research team from China published a new analysis that shows the Earth's climate would increase by 4 °C, compared to pre-industrial levels, most likely by 2084. They found that most of the models projected an increase of 4°C as early as 2064 and as late as 2095, with 2084 appearing as the median year.

"Our ultimate goal is to provide a comprehensive picture of the mean and extreme climate changes associated with higher levels of global warming based on state-of-the art climate models, which is of high interest to the decision-makers and the public," said Dabang Jiang, a senior researcher at the Institute of Atmospheric Physics of the Chinese Academy of Sciences.

Perhaps some would want to dismiss both government agencies as being too pessimistic. The problem is in 1995, now 23 years ago,  then Vice-President Gore reflected on his experienced reality in a 1995 New York Times article:


For the generations after the Baby Boomers, there is no other issue of political importance. This is difficult for many to accept because of what will appear to be slowly evolving social and economic impacts that will create disruption even more significant than what happened between 1570 and 1710. (Note: That was before there was a United States of America...or maybe that is why there is a United States of America.

One cannot discuss the Climate Change period of 1970-2110 without saying it "will appear to be slowly evolving social and economic impacts." The impacts will occur over a much longer period than the 3 minute attention span of the average person and the two day attention span of investment analysts, will require comprehending many thousands more words than found in a tweet, and really will not at all vw as cool as the new Apple stuff.

If you think otherwise, remember that then Congressman Al Gore held hearings on Climate Change in the mid-1970's.

Finally, one has to note, as we have  before, that scientists are often forced to create the basis for Climate Change denial by simply reporting observations. We see it again this month.

In early March we learned that Climate change: Rain melting Greenland ice sheet 'even in winter' which explained how the Greenland ice is melting faster than expected.

But at the end of the month we get this headlines The world's fastest-melting glacier is growing again. But it's temporary, NASA says. which allowed Sean Hannity to post BRAIN FREEZE: Melting Greenland Glacier Now ‘Growing Again,’ Climate Scientists ‘Surprised’ implying that the climate science community doen't know what they are doing.

As summarized in a subtitle for a National Geographic story on the matter A pulse of cooler water at its edge let part of the glacier gain some mass. But overall, the melting across Greenland continues apace.

That's how the generations after the Baby Boomers will be denied by corporate interests the necessary action to reduce the impact of Climate Change. And while some are making plans to adapt, most are fuming about the silly, distracting politics surrounding the Trump Administration which it appears the Trump people will win because they are better at "common man" politics. The climate clock is ticking folks.