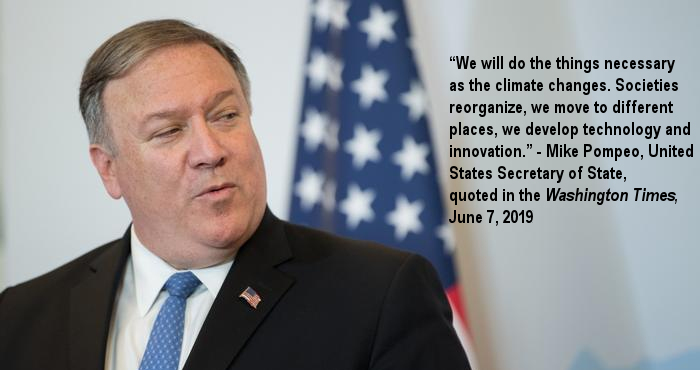 Click on image to read the full article.
U.S. Secretary of State Mike Pompeo, speaking on behalf of what is Republican thinking, laid out policy regarding Climate Change.

In an interview while he was in Europe, Pompeo explained that the Paris Agreement was an "aspirational" document but otherwise worthless because its "enforcement mechanisms were near-nonexistent." He argued that it represented a “real burden … on the [U.S.] and its economy and its workers and ordinary people in places like Kansas that I come from.”

Instead, Pompeo explained that we Americans will...
...instead of developing governmental policy as suggested in House Resolution 109 - Recognizing the duty of the Federal Government to create a Green New Deal and creating the bureaucracy needed to implement it.

Before becoming Secretary of State, Pompeo served as CIA Director for the Trump Administration leaving his seat representing Kansas House District 4 which he had held since January 2011. He was a member of the Tea Party wing of the Republican Party. In the 2010 Republican Primary when another Republican candidate began to gain on him, Koch Bros funding assured his victory.

Pompeo did not "come from" Kansas. He did not evolve from some rural experience in the Plains States. A native Californian who graduated from Los Amigos High School in Fountain Valley, Pompeo is a West Point graduate who served only 4+ years as an officer in the Army and is an attorney who received his JD degree in 1994 from Harvard.

In 1998, when he was 34, Pompeo came to Kansas with three West Point friends, Brian Bulatao (who at the time worked for Bain Capital and who was confirmed by the United States Senate as Under Secretary of State for Management on May 16, 2019), Ulrich Brechbuhl (who since May 3, 2018, has served as Counselor of the United States Department of State), and Michael Stradinger. In Wichita they acquired three aircraft-part manufacturers along with a fourth in St. Louis, Missouri. They obtain venture funding from Bain Capital (Mitt Romney was that company's first CEO), Koch Industries, and Cardinal Investment (founded by another West Point/Harvard graduate).

One other fact Pompeo offered about himself in a speech places in ideological context the importance of the statements he made about Climate Change policy. 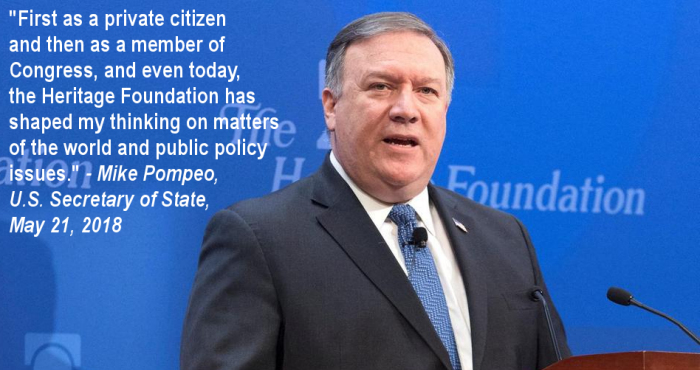 Simply put, Pompeo is the face of an evolving American conservative activism that is blending Neoconservatism and Neoliberalism under what appears to be unfocused freewheeling President Donald Trump.

And, as mentioned by Pompeo, the core conservative Climate Change view is addressed the following policy statement:
Since it is unlikely that the Democrats can get control of the U.S. Senate in the foreseeable future, it would appear that Pompeo's conservative policy will prevail into the next decade. And it would be a mistake to dismiss the policy statement.


More than 200 of the world’s largest listed companies forecast that climate change could cost them a combined total of almost $1 trillion, with much of the pain due in the next five years....
The companies anticipated a total of $970 billion in extra costs due to factors including hotter temperatures, chaotic weather, and pricing of greenhouse gas emissions. About half of these costs were seen as “likely to virtually certain.”
Many companies also saw a huge potential upside if the world can de-carbonize in time to avert the bleakest climate scenarios, which scientists see as an existential risk to industrial civilization.
Fossil fuel companies who submitted responses to the study reported $140 billion of potential opportunities in the drive toward a low-carbon economy - more than five times the $25 billion value of the risks they identified...
With climate action focused on limiting the burning of coal, oil and gas, CDP urged investors to question why fossil players seemed so confident of benefiting from an energy transition that would render their existing business models obsolete.

It might be tempting to minimize this news except that it is based on a study initiated by the G20 Finance Ministers and Central Bank Governors. At their request the Financial Stability Board (FSB) established the Task Force on Climate-related Financial Disclosures (TCFD) and its recommendations resulted in reporting from 6,937 companies (more information is available here).

And so as many of the Democratic candidates seeking to run for President in 2020 embrace the Green New Deal of Democratic Socialist Alexandria Ocasio-Cortez, Donald Trump has a simple answer - individual American's and their businesses using their ingenuity will deal with Climate Change when and as needed. (The unsaid corollary is: and those who can't deal ...well... we already have too many people.)

Or Americans could choose to depend on the Democrat of their choice who says "I'm from the government and I'm here to help you." The problem with that is even if Trump loses, the Senate stands in the way.

Meanwhile some of the states are taking serious action such as California as explained in Embracing Inclusive Capitalism Plus within The California Green & Gold Deal as Newsom leads.