Climate Change, the only socioeconomic issue threatening us all, did get a bit of attention. But Montana Governor Steve Bullock raised the question : "Are we going to actually address climate change? … Or are we going to give people a better shot at a better life?” He then said: “You can do both.” (Actually, you can't as AOC's Green New Deal is a dream bordering on a lie.)

Then Bullock went on: “Let’s actually have the scientists drive this,” he said. “Let’s not just talk about plans that are written for press releases that will go nowhere else if we can’t even get a Republican to acknowledge that the climate is changing.”

Well, let's look at what the scientists, engineers, and other smart folks are saying (click on the image below to read what the best and brightest have to say): 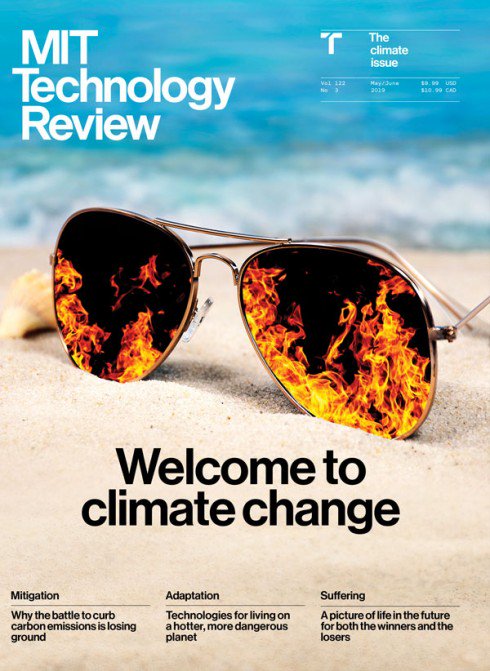 Yes, they are telling you "the battle to curb carbon emissions is losing ground," and that the adaptation technologies are "for living on a  hotter more dangerous planet" where there will be suffering with both "winners and the losers."

It's all reflective of what scientists are seeing - continuing reports indicating things are worse than anyone thought in 2018 when as reported here in As the midterm election approaches we should be in great fear of Climate Change. Why aren't we?:


In May a collaborative research team from China published a new analysis that found that most of the models projected an increase of 4°C as early as 2064.
Under the direction of the Trump Administration the National Highway Traffic Safety Administration (NHTSA) with the cooperation of the U.S. Environmental Protection Agency (EPA) and the U.S. Department of Energy (DOE) issued a Draft Environmental Impact Statement (DEIS) for the Safer Affordable Fuel-Efficient (SAFE) Vehicles Rule for Model Year 2021–2026 Passenger Cars and Light Trucks projecting a near worst case scenario, a 4.387°C (7.876°F) global temperature rise since 1880 by the year 2100.

Focus on that 2064 projected year, just 45 years from now. My grandchildren will be over 60.

Their parents and their grandparents (including me), the generations that could have done something about Climate Change, will be dead.

Greeting all of us, that MIT Technology Review cover says:

The fact is that since the beginning of this millennium those of us on the planet Earth have been living through the early impacts of Climate Change.

Truthfully, I should just ignore what's going to happen between now and 2064. I can emulate most of the American politicians - I'll fret over Trump's border immigration policy ...or is it Obama's... or maybe I can be honest and blame it on Congress which is where the blame belongs.

In fact Congress is where almost all the blame for immigration and interstate commerce policy belongs under our system federal legislation, not blathering Presidents and Presidential candidates. And I know that many, if not most, of the folks enjoying the Democratic debates have no idea who their Representative in Congress is.

Anyway, in that MIT Technology Review are a good selection of articles to bring you up to date on the science and engineering of the climate crisis. Plus there is the discussion of the unavoidable suffering that is going to occur.

Included in that discussion is an article by Roy Scranton, author of the 2018 book We’re Doomed. Now What?: Essays on War and Climate Change and the 2015 book Learning to Die in the Anthropocene: Reflections on the End of a Civilization. Click on the image below to link to the article: 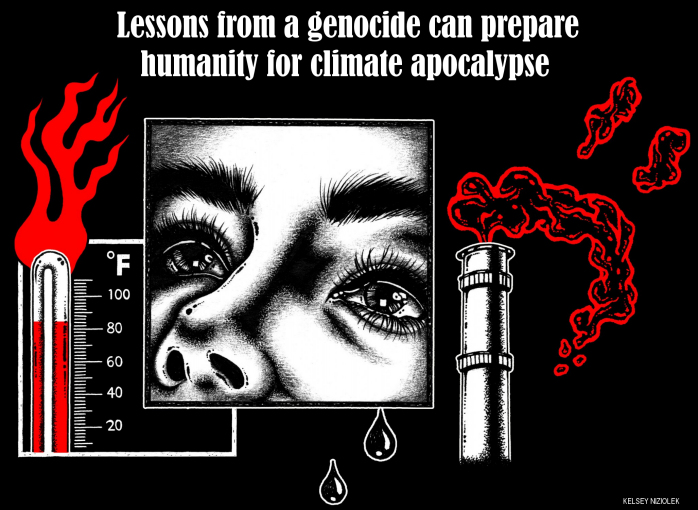 It's a long article. So to give you a feel for the article, here are excerpts:


The fantasy version of apocalypse always begins with the longawaited event—a missile launch, escaped virus, zombie outbreak—and moves swiftly through collapse into a new, steady state. Something happens, and the morning after you’re pushing a squeaking shopping cart down a highway littered with abandoned Teslas, sawed-off shotgun at the ready. The event is key: it’s a baptism, a fiery sword separating past and present, the origin story of Future You.
Catastrophic global climate change, however, is not an event at all, and we’re not waiting for it. We’re living it right now....
In September 2018, the secretary general of the United Nations, António Guterres, gave a speech warning: “If we do not change course by 2020, we risk missing the point where we can avoid runaway climate change.” The months following saw the US government crippled by a fight over whether to build a wall on the southern border to keep out climate change refugees, news that greenhouse-gas emissions have not decreased but in fact have accelerated upward, and a populist revolt in France sparked by opposition to a gas tax.
n the first weeks of 2019, new scientific reports appeared suggesting that we may have passed the point of no return....
Imagine 2050. I’ll be 72 years old. My daughter will turn 33. Wide swaths of now-inhabited coastlines and equatorial jungles and deserts will likely be uninhabitable, either underwater or too hot for humans to live in. People all around the world will likely have seen countless local and regional climate disasters, lived through major global economic shocks and catastrophic crop failures, and become used to random acts of violence as angry and sometimes starving citizens act out against increasingly repressive governments struggling to maintain control. In response to all this political, environmental, and economic instability, anxious populations will likely have traded their freedom in exchange for promises of safety, while security forces built more walls and nations began to fight over once-abundant resources like potable water.
If the political and social ramifications of global warming are anything like what happened during the last major climate fluctuation, the “Little Ice Age” of the 17th century, then we should expect a similarly horrific succession of famines, plagues, and wars. Historian Geoffrey Parker estimates that second-order effects of 1 °C global cooling that started around 1650 may have wiped out a third of the human population. Records from parts of China, Poland, Belarus, and Germany indicate losses of more than 50%.
This was not the apocalypse I grew up with. It’s not an apocalypse you can prep for, hack your way out of, or hide from. It’s not an apocalypse with a beginning and an end, after which survivors can rebuild. Indeed, it’s not an “Event” at all, but a new world, a new geological era in Earth’s history, in which this planet will not necessarily be hospitable to the bipedal primate we call Homo sapiens. The planet is approaching, or already crossing, several key thresholds, beyond which the conditions that have fostered human life for the past 10,000 years no longer hold.
This is not our future, but our present: a time of transformation and strife beyond which it is difficult to see a clear path. Even in the very best case—a swift, radical, wholesale transformation of the energy system upon which the global economy depends (which would entail a complete reorganization of human collective life), coupled with massive investment in carbon capture technology, all occurring under the aegis of unprecedented global cooperation—the stressors and thresholds we confront will continue to put immense pressures on a growing human population.
...Despite decades of failure, a disheartening track record, ongoing paralysis, a social order geared toward consumption and distraction, and the strong possibility that our great-grandchildren may be the last generation of humans ever to live on planet Earth, we must go on. We have no choice.

The article has much more content, all of which is equally cheerful.

Keep in mind that this is the MIT publication's update on Climate Change, a review of recently gleaned information science and engineering folks are working with. The last issue with a cover focused on Climate Change was 2016's January/February issue. It was a primary subject in the edition, but there was no focus. Indeed, it offered a hopeful theme that "It's too late to stop climate change from happening. but we can begin to limit the damage and slow it down." About 10 months later Donald Trump was elected President and the world began its slide into nationalism which is resulting in Climate Change denial, or at least a refusal to act to limit impacts.

On the subject of "suffering" in addition to Scranton who has been warning folks for awhile now,  they've included:
And finally, this edition includes a fiction piece as they are trying desperately to stimulate us at the emotional level so that we might actually see some of the serious discussion of the slowly moving climate apocalypse, discussion that recognizes that it is now a slowly moving climate apocalypse. Consider these beginning lines from Hugo, Nebula, John. W. Campbell, Compton Crook, Theodore Sturgeon, and Michael L. Printz awards winner American science fiction writer Paolo Bacigalupi's A Full Life:


By the time Rue reached 15 she had begun to mea sure her life by her many moves, the parchment of her life torn into fragments, each one reducing the integrity of the whole. Each small leaf then folded. Folded and shaped until it became surreal origami. Tear here. Fold there. This part became a house, burning down. Tear here, fold again. This shred became a rusty diesel truck, driving south. Tear again. Fold. This bit became an apartment building, without a roof.
Tear here. Tear again. Make a casket.
Keep tearing.

And so I wonder why anyone under the age of 50 is paying attention to an argument over the details of "Medicare-for-All" or thinks migration from Central America and Mexico is ever going to be manageable when because of Climate Change impacts it is likely to become unimaginable. Is nobody listening???

To borrow from Roy Scranton, despite decades of failure, a disheartening track record, ongoing paralysis,and the strong possibility that our great-grandchildren may be the last generation of humans ever to live on planet Earth, apparently we must go on not addressing our failed socioeconomic order geared toward consumption and distraction, pretending that the issues of the day are student loans and health care co-pays.

I would apologize for those decades of failure that began in the late 1970's when Al Gore and a few others brought the matter clearly to our attention. But good grief, in 2019 (except for activists) those under 50 seem to want to pretend that "greed is good" as my generation did.

It is worth noting that the latest Climate Change focused MIT Technology Review reflects a realization about social sciences. We humans in groups
What Americans do not yet understand is that we do not constitute a single group within which nationalism would naturally apply, but rather geographic regions within which group affiliations may be adequate to substitute for nationalism, though frequently in the form of tribalism. This was seen during the Great Depression/Dust Bowl years - the underlying truth of Grapes of Wrath.