Brangelina Data and The NASDAQ

Regular swings in excess of 4% within a calendar quarter in the value of American wealth as represented by the stock market is a relatively new thing. Graphs can distort statistical information, but being an old guy my reality check with regard to American wealth is this graph of the Dow, the S&P, and the NASDAQ: 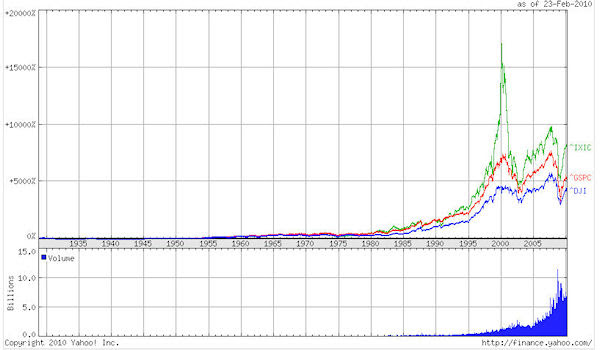 All that it shows is that something happened that resulted in the creation of wealth by the mid-1980's, if one uses the term "wealth" per its second definition in Dictionary.com: "an abundance or profusion of anything." The "anything" in this case appears to be the NASDAQ Composite, which IMHO is an index of stocks ...well... let me offer Wikipedia's explanation instead of my opinion:

Launched on February 5, 1971 with a base value of 100 points, the NASDAQ Composite (which was the National Association of Securities Dealers Automated Quotations) is a broad based index which is calculated under a market capitalization weighted methodology that began trading with median quotes for 2,500 over-the-counter securities. As of 2009, the index has grown to include over 3,000 companies.

With the creation of the NASDAQ, "over the counter" trading - what was thought of as the "iffy" securities trading in the category of placing a bet on 17 at the roulette table - suddenly became an index of wealth reported in the press along with the Dow Jones Industrial Average and the Standards & Poors 500 indices.

Psychologically this new index created an "enthusiasm" carefully cultivated by the financial industry and given credence by new economic theories and politicians.

When one sees distortion in wealth to the extent represented by the graph, you know you are dealing with the "anything" definition, but if you take a long-term historical view you likely need to substitute "nothing." It is not a coincidence that the "information age" came to be part of the economic jargon.

It has reached a point that "wealth" is being created by exchanging and storing information about "Brangelina" (that's a Wikipedia entry), and that is when "anything" is really "nothing."

The creation and sale of the servers that store Brangelina data created nothing of value, in that if those servers disappeared tomorrow it would not alter the human condition in any meaningful way. For those servers to start dying would in no way be comparable to a new potato blight or wheat leaf rust which might result in people starving.

When I look at that graph, I remind myself that much of that new post-1980 wealth is Brangelina data. I also remind myself the some of it is data on how to grow rice more effectively, which is data that has an inherent value to mankind.

This is why I think the world's economy still has a long way to go before it can stabilize and why I feel California's economy is in for a long "difficult" period. After all, we staked our economic well being on the technology being used to track the NASDAQ and being used to store and share the Brangelina Data. Even a major chunk of our economy is historically dependent on the success of marketing Brangelina data - Hollywood.

Unfortunately, we also appeared to believe in that marketing when we elected The Terminator as our Governor.
Posted by Michael O'Faolain - at 10:01 AM No comments: