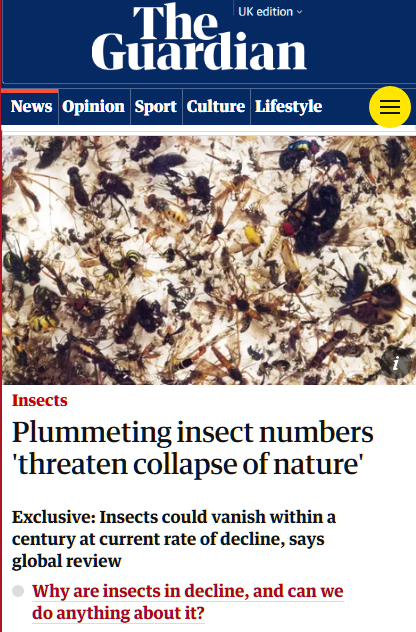 According to the Guardian article published yesterday because of Climate Change "more than 40% of insect species are declining and a third are endangered" and "rate of extinction is eight times faster than that of mammals, birds and reptiles."

Regarding the insect population, many of us in Northern California have been concerned about the insect decline as reflected in the article last month Are We Watching the End of the Monarch Butterfly? It hits a bit close as it tells a story:

...A small group of these citizen scientists recently descended on the sleepy coastal town of Bolinas, near Stinson Beach, north of San Francisco, to conduct the latest tally in a place where thousands of these butterflies were once counted during their winter migration.
The group was met by Mia Monroe, a ranger for the National Park Service for 40 years. She was representing the Xerces Society, a nonprofit devoted to invertebrate conservation.
“We aren’t expecting many butterflies today,” Ms. Monroe warned. Monarch numbers have been plummeting for decades, and recent surveys of their breeding habitats had reported low numbers. Making matters worse, only weeks before, wildfires had swept through the region, engulfing the Bay Area with smoke for two weeks.
“Maybe the monarchs have taken a different route, around the fire and smoke?” someone asked. “That’s a dream,” Ms. Monroe said. “But we are here to honor the survivors, and to be together in a difficult moment.”
Last year’s count in Bolinas had been very low; still, the trees had been festooned with scores of butterfly clumps, in which hundreds of monarchs hung together for warmth and protection. This time, there was just one clump. Later we would learn that the total count of this site in Bolinas, which the previous year tallied 12,360 butterflies, plummeted this winter to just 1,256 monarchs. “This animal story that has been going on for centuries and perhaps thousands of years is disappearing and may be gone” soon, Ms. Monroe told us, her eyes tearing.

Insects are critical to the food cycle, as they pollinate the large majority of plant species, keep the soil healthy, recycle nutrients, control pests, and much more. One of the biggest impacts of insect loss is on the many birds, reptiles, amphibians and fish that eat insects. Simply the long term impact on most animal species, particularly humans, will be catastrophic.