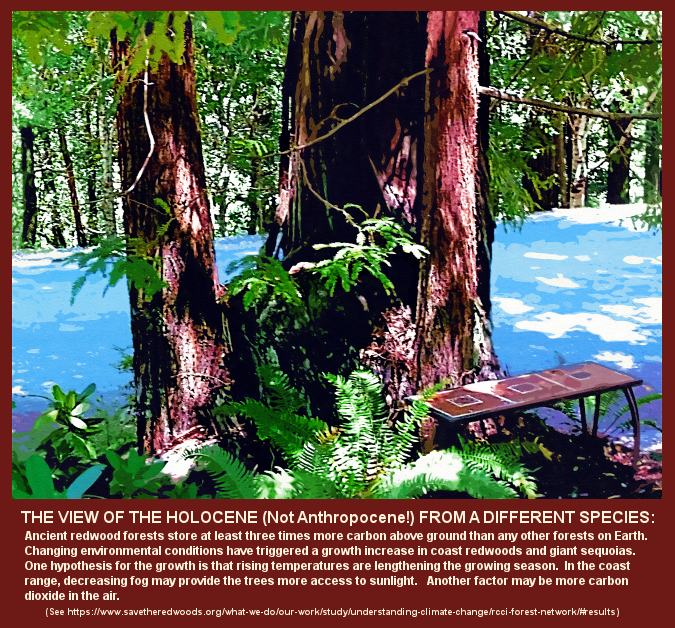 Donald Trump did not invent the arrogance of self-importance endemic to humans, despite the fact that so many people find him irritating.

This group of pop-science advocates are pushing the Earth's age along into what they call the "Anthropocene Epoch."

They bypass the stratigraphers (scientists who study rock layers) who, over many decades through careful extensive study and extensive debate within the International Union of Geological Sciences (IUGS), established the Earth’s time scale system.

When challenged, these pop climate science advocates offer the best pop-science answer ever as explained this 2013 Smithsonian article What Is the Anthropocene and Are We in It?:


Many stratigraphers (scientists who study rock layers) criticize the idea, saying clear-cut evidence for a new epoch simply isn’t there....
Some Anthropocene proponents concede that difficulty. But don’t get bogged down in the mud, they say, just stipulate a date and move on. ...Will Steffen, who heads Australia National University’s Climate Change Institute...says the new name sends a message: “[It] will be another strong reminder to the general public that we are now having undeniable impacts on the environment at the scale of the planet as a whole, so much so that a new geological epoch has begun.”
To Andrew Revkin, a New York Times reporter (now blogger) who suggested a similar term in 1992 that never quite caught on (“Anthrocene”), it’s significant that the issue is being debated at all. ...He says. “We’re the first species that’s become a planet-scale influence and is aware of that reality. That’s what distinguishes us.”

In other words, ignore scientific method because science indicates that within one scientific field - climate science -we humans are important right now.

Sometimes we humans need to step back from the arrogance precipice and acknowledge just how truly unimportant we are in the big picture.

Of course, I have to offer an admonishment to the reader - don't read further if  you have absolute beliefs that recognize a human superiority over the Earth and all its creatures or if your thing is Genesis 1:26-31 of the Bible which clearly expresses this arrogance:


Then God said, “Let Us make man like Us and let him be head over the fish of the sea, and over the birds of the air, and over the cattle, and over all the earth, and over every thing that moves on the ground.”
And God made man in His own likeness. In the likeness of God He made him. He made both male and female. And God wanted good to come to them, saying, “Give birth to many. Grow in number. Fill the earth and rule over it. Rule over the fish of the sea, over the birds of the sky, and over every living thing that moves on the earth.”
Then God said, “See, I have given you every plant that gives seeds that is on the earth, and every tree that has fruit that gives seeds. They will be food for you. I have given every green plant for food to every animal of the earth, and to every bird of the sky, and to every thing that moves on the earth that has life.” And it was so.
God saw all that He had made and it was very good. There was evening and there was morning, the sixth day.

At this point those of us who don't believe in human superiority over the Earth and all its creatures need to review some boring hard science.


About Geological Time Spans and Life

More than 99% of all species of life forms that ever lived on Earth are extinct. Although the number of Earth's catalogued species of lifeforms is between 1.2 million and 2 million, the total number of species estimates range from 8 million to as high as 1 trillion. The oldest physical traces of life date back 3.7 billion years. Consider this: 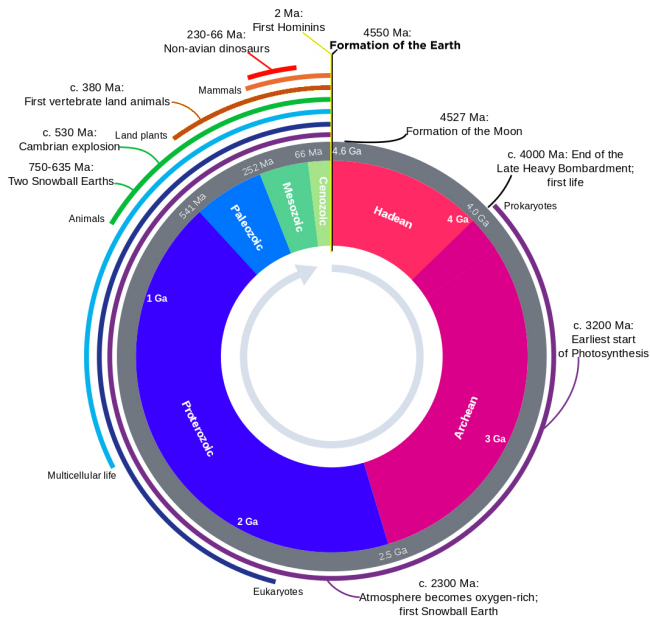 The geological clock: a projection of Earth's 4.5 Ga history on a clock ("Ma" = a million years (Megayear) ago;
"Ga" = a billion years (Gigayear) ago)

The current geological era, covering the period from 66 million years ago to the present day, is called The Cenozoic Era.

It is also known as the Age of Mammals by the arrogant because they think large mammals dominate it.

Apparently not existing in their world are arthropods, despite the fact that by nearly any measure, arthropods constitute the most successful Phylum in the Animalia Kingdom on the planet:

They are spiders, insects, centipedes, mites, ticks, lobsters, crabs, shrimp, crayfish, krill, barnacles, scorpions and many, many others. A few are a direct threat to mammals (including humans) with their poisonous venom. Many are an indirect threat because they carry infectious disease-causing microbes. Many others are food sources.

But I've digressed, so let's return to the geologically-determined layers of time.

The continents moved into their current positions during this Cenozoic era. Cenozoic, means "new life," derived from Greek. The Cenozoic is divided into three periods: the Paleogene, Neogene, and Quaternary; and seven epochs: the Paleocene, Eocene, Oligocene, Miocene, Pliocene, Pleistocene, and Holocene. 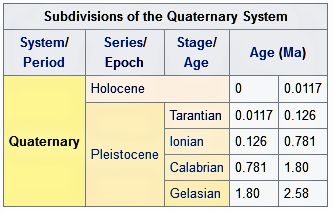 Notice on that "clock" above at about 11:59 pm the "First Hominins" label with its yellow line adjacent to the midnight black line denoting the Formation of the Earth. That entire "time" width of the yellow line is represented on the table to the right. We are currently in the Holocene Epoch of the Quaternary Period of the Cenozoic Era which is 0.00000257% of the time the Earth has existed, or if you prefer 0.000031% of the time land plants and animals have existed on Earth.

And if you want to assert that modern humans are causing environmental changes that could destroy the Earth or life on Earth, consider this graph: 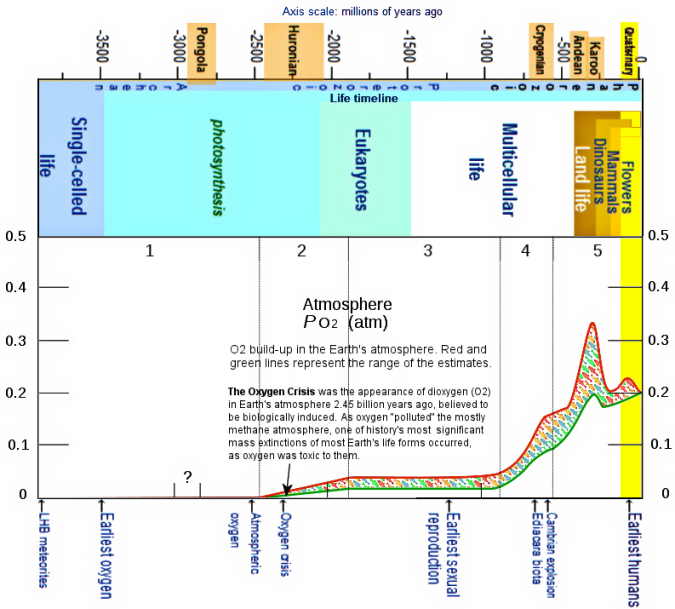 As noted on the graph, the Oxygen Crisis caused the most significant mass extinction in the history of the Earth. But don't get confused. It wasn't a shortage of oxygen to breath. It was the introduction of breathable oxygen in the atmosphere the killed off most existing life.

Yet somehow, life on Earth made it despite that toxic element oxygen, adapting to thrive in the presence of an oxygenated atmosphere.

It is not life as creatures back then would recognize. Instead, most recently it is you and me that resulted. Again, the time modern humans have existed on Earth cannot be accurately represented on the clock because it is so small and insignificant. Heck, even the time modern humans have existed relative to the existence of land plants and animals is also too small and insignificant to be relatively represented properly.

In other words, human existence is insignificant in the big picture. In terms of Earth time the Holocene Epoch of the Quaternary Period of the Cenozoic Era has not existed long enough to have even one named Stage/Age.

But these pop-science advocates say the Holocene Epoch ended because of human activity. Last year an article in Forbes declared Humanity Officially Started Ruining The Planet In 1965 -- Welcome To The Anthropocene Era and this month we're offered articles such as 'Loneliest tree' records human epoch telling us that nuclear testing in the 1950's was the defining moment because of Carbon-14 in a ring of a living tree.

How this relates to established rock layers isn't clear, but as these pop-science climate change activists tell us "don’t get bogged down in the mud" of established scientific method because there is a political agenda based on science that needs to be advanced.

It is true that humans as a life species are starting to have a measurable impact on climate which may create a geological record comparable to that found in the beginning of an ice age. This started at the beginning of what generally is referred to by social scientists as the Industrial Age, when humans began using indirect energy sources to accomplish physical work and, more recently, mental tasks.

Archeology and anthropology scientists recognize a "Neolithic" age prior to the current age. It is a period of about a dozen millenniums. During this time the wide-scale transition of many human cultures from a lifestyle of hunting and gathering to one of agriculture and settlement made an increasingly larger human population possible. Archaeological data indicates that the domestication of various types of plants and animals happened at the beginning of the Holocene Epoch in separate locations worldwide.

Initially in this review of the Neolithic Age of the Holocene Epoch we need to acknowledge the following:
That last fact is what we must understand as the Neolithic Age direct use of energy - meaning humans first utilized their own bodily energy to get physical and mental work done, then started using the bodily energy of domesticated animals. 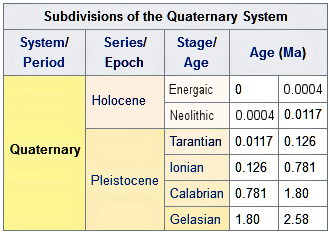 The indirect use of energy in the form of heat to create steam to drive engines for mechanical work did not begin until 400 years ago. It is only after that time that the use of internal combustion engines, electricity, nuclear energy, and other forms of energy not from living lifeforms became widespread to accomplish physical and, more recently, mental tasks.

In effect, we humans have moved on to a new age - what I would call the Energaic Age (see table to the right) in recognition of the impact of concentrated indirect uses of large quantities of energy sources.

In the process, which is only 400 years old, we see some unanticipated side effects that could destroy the current version of human civilization or, at maximum impact, end The Quaternary Period or The Cenozoic Era.

However, that is unlikely. We Homo sapiens sapiens are beginning to
I am an aging member of the subspecies Homo sapiens sapiens living in the early stages of what I suggest we call the Energaic Age in the Holocene Epoch of the Quaternary Period. In my opinion if scientists want to maintain credibility they should quit trying to invent some "Anthropocene Epoch" just to separate ourselves from the ancient Sumerians for the purpose of communicating a political message.

In the meantime, I'm going to step outside and commune with some Sequoia sempervirens (redwood trees) which, since their relatives were around in the Mesozoic Era, can show my species how to survive. It helps maintain some sense of perspective on the chronological meaning of human existence.
Posted by Michael O'Faolain - at 3:22 PM