Climate Change Black Death Is a Loser Issue
No, we're not Australia, but Democrats need to pay heed to what just happened in the Aussie election

Since the last post here in the  climate change black death surrounds us  on April 23, 2019, the May 18 Australian election results were announced. 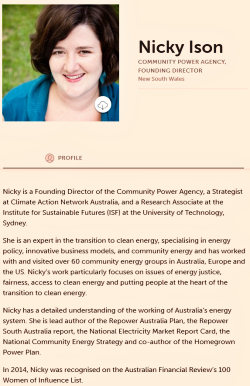 Stunning? For Australian's...
In another article using "stun" also 'What have we misread?' Labor faithful in shock after stunning election defeat we read:


This was the climate change election, wasn’t it? This was about generational change. This was the election which would usher in a new active purpose for government.
None of that happened, and understanding why will take weeks to work out. For the Labor faithful, the first emotions were raw. “What happened?” asked Tiani Rutledge-Wilkes, an interior designer, who said she had no idea what had gone wrong. She thought the ALP would win, and had her nails painted “Labor red” for the occasion. “What have we misread?”
“It’s just not the polls [that got it wrong] but all the experts.” 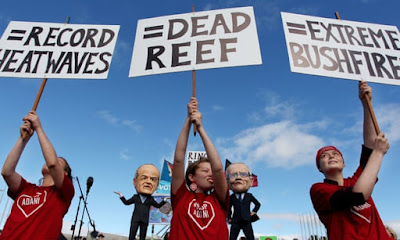 As political leaders travel across Australia to deliver their election talking points in farms, factories and sports fields, they are criss-crossing a country in the grip of a rolling climate emergency.
In the year leading up to the election on 18 May, huge swathes of eastern Australia have endured their worst droughts in a century. There have been apocalyptic scenes along the Murray Darling river system in which up to 1 million fish have died. In Queensland, floods have wiped out half a million cattle and bushfires have burned close to pristine rainforests. In the usually cool southern state of Tasmania more bushfires have raged across 190,000 hectares of land and devastated old-growth forests.
Last year was Australia’s hottest year on record and as winter begins many of the country’s major cities are staring down the barrel of water restrictions with Sydney, Melbourne, Darwin and Brisbane all facing the prospect of dams at just 50% capacity.
But on the campaign trail, through warming cities, blackened bush and scorched outback, the two contenders for prime minister are trumpeting starkly different messages about what, if anything, should be done to address the crisis.
The prime minister, Scott Morrison, represents the ruling conservative Liberal party. The slogan-loving former head of Tourism Australia came to power after toppling his more moderate predecessor, Malcolm Turnbull, in 2018.
Morrison’s stance on climate change can be summed up by an address to parliament in 2017 while brandishing a lump of coal. In a speech supporting fossil fuels, he goaded the opposition: “Don’t be afraid. Don’t be scared. It won’t hurt you. It’s coal.”
The idea that many in Morrison’s party consider climate change and its effects to be something to be laughed at is not hyperbole from the left. In 2015, the former prime minister Tony Abbott – who once called climate change “crap” – was caught on camera laughing at a joke about rising sea levels in the Pacific.

Another article explained: "It was billed as the climate change election, and the climate lost." How exactly did Climate Change lose? Let's begin with Ms. Ison, who based on any information you can Google is a smart, energetic, focused advocate for Climate Change reduction policy who has been writing in the Australian edition of The Guardian. On May 2, she shared in After Extinction Rebellion, Australian politicians are on notice – change is coming her views that that the ALP policy position was unacceptable:


This is the challenge for climate campaigns and movements in countries like Australia. How do we shift from where we currently stand to where the ALP’s climate policies are considered the bare minimum of what is needed?

When the choice for voters in a country experiencing major impacts of Climate Change is between a coal advocate and the more "progressive" choice of the Labor Party, the losing progressives change leaders and the new one creates a headline New Labor leader Anthony Albanese calls for end to climate wars.

As noted in a previous post political parties are only winners and losers, and losers can't implement policy ideas, even good ones. Democrats in the U.S. in 2020 must, of course, embrace socialism and the Green New Deal. No point in not being a loser. Or maybe Trump will be seen as more of a loser, who knows?

Nonetheless there is some irony in this headline this week Human civilization faces "existential risk" by 2050 according to new Australian climate change report. The report titled Existential climate-related security risk: A scenario approach, which you can download here, includes a forward by the former chief of the Australian Defense Force Admiral Chris Barrie. The report's authors offer this overview of its contents:
And the Report offers the following policy recommendations:
The idea of Climate Change being an existential threat is hardly news to this writer who has noted that both the U.S.and China have formally acknowledged that severe Climate Change is inevitable during this Century and that it will have catastrophic results in many locations. The U.S. military is officially and actively focused on dealing future catastrophic impacts of Climate Change on U.S. military facilities.

Nonetheless, while the United States is not Australia, political acknowledgement of the need to address Climate Change both by reducing carbon emissions and begining the adaptation process will not be treated favorably by the voters in about 30 of the 50 states.