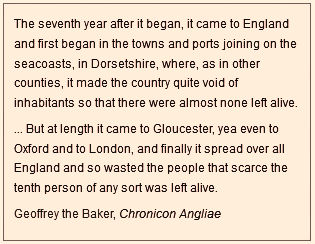 According to Wikipedia, the outbreak was thought to have originated in the dry plains of Central Asia killing an estimated 25 million Chinese and other Asians during the fifteen years before it reached Crimea by 1343. By the end of 1346, reports of plague had reached the seaports of Europe: "India was depopulated, Tartary, Mesopotamia, Syria, Armenia were covered with dead bodies". Spreading throughout the Mediterranean Basin and Europe, it is estimated to have killed 30–60% of Europe's total population.

Back then people didn't know what caused it. But because of the severity of impact from the mass mortality rate, society subsequently became unstable, destroying economies around the world, and increasing warfare, crime, popular revolt, waves of religious bigotry, and persecution.

Wow. If only humanity knew in advance what was coming and that something could be done about it, they would have avoided it. Just like we have been doing to deal with Climate Change and its impacts on 8 billion people....

Make no mistake about the Climate Change disruption. It's coming in this century, it will cause economic dislocation around the world and will increase disease, warfare, crime, popular revolt, waves of religious bigotry, and persecution. And it will result in the deaths of 20%+ of the world's population.

Note that no qualifier was offered. I didn't say "it's coming" unless the Paris Climate Accord goal of holding the increase in the global average temperature to well below 2°C, and to pursue efforts to limit the temperature increase to 1.5°C, above pre-industrial levels is achieved.

As previously noted in this blog "in 2018 in both the U.S. and China formal findings have been made that we have 'locked in warming' of 4°± Celsius most likely within 60 years." And the United Kingdom's Met Office (National Meteorological Service) announced this month that their calculations indicate there is a chance of a year within the next five years in which the average temperature rise above pre-industrial levels will exceed that 1.5C, the lowest of the two Paris agreement targets set for the end of the century.

Now I hate repeating myself, but make no mistake about the Climate Change disruption. It's coming in this century, it will cause economic dislocation around the world and will increase disease, warfare, crime, popular revolt, waves of religious bigotry, and persecution. And it will result in the deaths of 20%± of the world's population.

Climate Change will be the 21st Century equivalent of the Black Death.

The good thing about it is that in the coming decades it will disrupt the lives of, and kill, without regard to nationality, ethnicity, race, sex, age, sexual preference, or even wealth - you know, the issues that American liberals have used to create headlines. Meanwhile, Republicans are basically Climate Change deniers.

Then again, except for Al Gore who started his efforts in 1974 - 45 years ago, historically until now no U.S. politician has made Climate Change policy an issue because the American electorate doesn't want to hear about it. Until now....

Today you will read and hear about the "Green New Deal."

For the most part, every American who is a Baby Boomer or older will not be alive to see the Climate Change disruption.

Instead, we are the ones who failed to protect the succeeding generations, a failure explained in a previous post. Here in the good old USofA, as explained in that post, we could start the process of adaptation and relocation, while attempting to reduce the impacts of Climate Change.

Some states and local governments are trying. But there is just not the will to focus on the problem at the national level. In fact there is not the will among 40% of the population to acknowledge that there is a problem.

And because we are who we are, Climate Change really won't become important until enough people are actually dying. Notice that I said "enough" because people are already dying, in small numbers in California due to drought-related wildfires and on the East and Gulf Coasts due to storms, and in much, much larger numbers in parts of Africa and around the Indian Ocean.

One of the complexities of science is that it depends on observations. Scientists cannot offer educated guesses about the physical world based upon what they think about people. They can only tell us what's happened and provide probabilities about the future based on calculations using the data they have collected.

No good scientist is going to tell you without qualifiers that world-wide disruption will occur in this century from Climate Change with impacts comparable to or worse than the Black Death of the 14th Century. The most you'll get is "the data indicates it could happen."

At the end of this post is a link to the listing of 30+ previous posts dealing with Climate Change and the environment. It almost seems like a waste of time to update this blog with new information reported since the first of the year, newly reported data collected by scientists. Heck, we're only a month into 2019. But here it goes....
I'm sure we will be updated regarding Climate Change data by scientists in the coming months. And it won't be good news.

Wow. If only humanity knew in advance what was coming and that something could be done about it! Except we do know that. And there are American politicians trying to do something about it. And, guess what.... The Koch Bros Neoliberal attack on The Green New Deal has begun, very subtly.