Can California and China lead a war on Climate Change Black Death to save wine production?

Fulfilling an agreement made in 2017, retired Governor Jerry Brown will soon become the California Director of the California-China Climate Policy Institute to be operated jointly by the University of California Berkeley and China’s Tsinghua University.

As noted here in the 2017 post  "Clear waters and green mountains are mountains of gold and silver." Seeking a Beautiful China and California together in harmony for our grandchildren, Jerry Brown met with Chinese officials. At the time we noted:


Shortly before meeting with President Xi, Brown... signed an agreement providing that China and the Golden State will work together on cutting their greenhouse gas (GHG) emissions over time.
The agreement builds on subnational pacts Brown signed with officials in Sichuan and Jiangsu provinces earlier this week.
“California is the leading economic state in America and we are also the pioneering state on clean technology, cap and trade, electric vehicles and batteries, but we can’t do it alone,” Brown said before a Chinese delegation.
"I have proposed that California will cut its greenhouse gases 40 per cent below 1990 levels and that we'll have 50 per cent of our electricity from renewables," Brown told President Xi Jinping in a 45-minute meeting.
"To keep that goal, we need a very close partnership with China - with your businesses, with your provinces, with your universities," Brown said.
We need to be seeking together in harmony a beautiful China and California with clear waters and green mountains for our grandchildren. 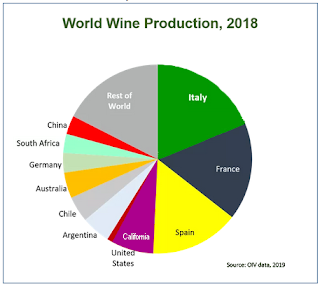 Which brings us to wine. No, the agreement does not specifically address wine grapes, an agricultural product strongly associated with California.

However, it's interesting how climate change will affect that which is of casual-but-real importance in the lives of most people. And wine production is an example of the myriad of potential impacts from Climate Change on human life, some of which are immediately life-threatening but most of which will be "way-of-life" ending.

In 2013 a study was published in the journal Proceedings of the National Academy of Sciences (PNAS), a worldwide analysis of the impacts of climate change on wine production. It found that the area suitable for wine production will shrink by as much as 73% by 2050 in certain parts of the globe, with high potential for stress on rivers and other freshwater ecosystems as vineyards use water to cool grapes or irrigate to compensate for rising temperatures and declining rainfall. The data leads to maps like this: 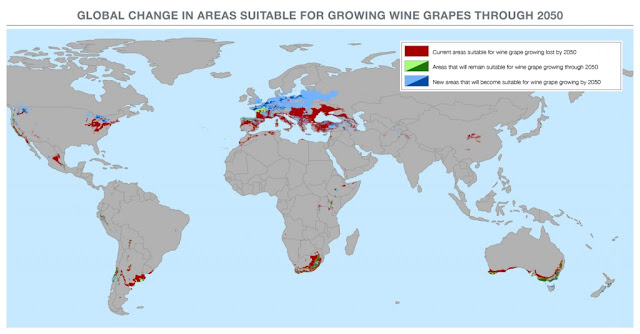 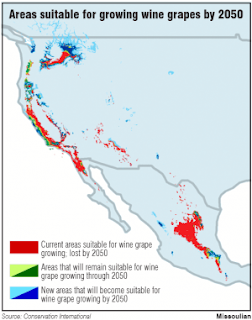 The map indicates new areas to which wine grape production could be relocated assuming a ±2.5° C temperature increase. In the enlarged portion of the map to the left, one can see that a substantial area in California that has been used for growing wine grapes will not be suitable for that use. But there would be an expansion of areas suitable in other locations both in California and in states further north.

So this would seem to indicate that U.S. wine production would continue, but it would have to be relocated - meaning that wine growers and their employees would move. As implied by Republican spokesman Secretary of State Mike Pompeo, the American democracy has already chosen to have our grandchildren... 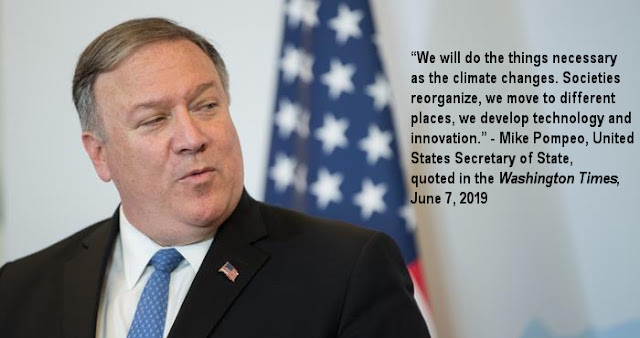 ...drinking wine from grapes growing alongside the moose of Yellowstone National Park or in prime panda habitat in China. That is because it is already too late to avoid the assumed average temperature increase of 2.5°. And, of course, the Republican Climate Change policy assumes that Americans will reorganize themselves and relocate.

It puts an American old west migration veneer over the Climate Change problems - we just continue with the "Manifest Destiny" myth as explained in the post The very-American delusion behind Trump's foreign policy: The Bold 19th Century and 21st Century Women Architect-Advocates of America's Manifest Destiny. 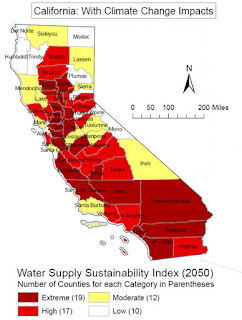 In the case of California, the data assumptions produce maps like the one on the left showing the levels of water supply sustainability difficulties in different regions.

The fallacy - the lie, really - is that the 2.5° assumption is not the likely outcome of the failure of Western "democratic" governments such as the U.S. to effectively intervene to stem the causes of climate change.

As noted here previously, "in 2018 in both the U.S. and China formal findings have been made that we have 'locked in warming' of 4°± Celsius most likely within 60 years." It could come as early as 2064.

This raises the obvious questions: Between now and the end of the century how many times are the wine growers going to have to buy acreages in a new location, plant grapes, wait three years for the first production and two more years for the aging process? Or do we need new maps which would tell us to move the vineyards to ...hmmm... where, Alaska?

And then, assuming we can move and reorganize to keep drinking the wine we like, does that mean Americans will continue to not take adequate steps to avoid a continuing change in climate in the next century?

While the example here is wine grapes, the truth is for any organized complex endeavor, relocation, reorganization, and innovation do not lend themselves to adapting to multiple changes due to environmental forces within relatively short time periods. And that applies to individuals and families.

And at some point, the number of people involved in relocations actually becomes a mass migration which we are already seeing not just in Africa or Micronesia, but also in Central America.

As the current generation of Americans begin to experience the impacts of climate change, there will still be an inclination to assume because "this level of flooding" or "having this many tornados" or whatever last happened over 50 or 100 years ago, the incidents will not occur in the near future when in fact they are likely to occur within 10 years. That is when rebuilding is foolish and Pompeo's relocation solution is the only choice.

Acting to limit climate change is another choice. But when "progressives" talk about a green "new deal", they forget that the original "New Deal" was politically difficult to implement until (and even then after) The Great Depression had impoverished 30% of Americans. And in the end, it wasn't the "New Deal" that restored American prosperity, it was World War II.

The Great Depression was a faceless inanimate enemy. And so is Climate Change except it is far slower moving. It is highly unlikely that California-China Climate Policy Institute can inspire a conservative, "not-really" democracy such as the United States to shift to a "war footing"  through a government reconfiguration of the national economy, all to battle  Climate Change a faceless inanimate, slow moving threat. Even the People's Republic of China will have problems with that.

So over the next decade pour yourself many glasses of your favorite wines from California (or China or Italy or France - look at that world map above). You may not be able to in the following decade. And while you are doing so, remember it is just a symbol of the "acceptable" losses coming soon, along with  climate change black death .