In a series of posts here grouped under climate change black death surrounds us both news and context regarding Climate Change have been offered. One particular recent news story deserves its own post.


"Most of the threats from climate change are 50 to 75 years out," said Andrew Wheeler, EPA Administrator and former coal industry lobbyist indicating to viewers that in his opinion the subject of Climate Change is just too distant in time compared to immediate issues such as lack of potable drinking water around the world which should be addressed, though not by the United States.

From the Trump Reelection Committee's viewpoint, Wheeler is correct mostly because of that distant time frame. They paint as alarmist wild-eyed Climate Change oriented Democrats and news media who need to do the math. And it is true that Wheeler's math nor the constantly qualified science are going to get those Democrats elected in 2020.

In 2020 elections will be held in the United States for (listed in order of importance):
Pew Research recently offered the following chart on the demographics of all potential voters in the U.S. in 2020 (click on the chart to read the full story from Pew): 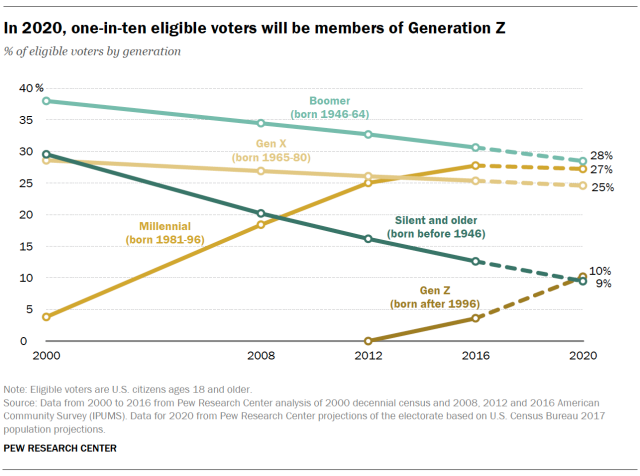 From a generational standpoint, if Wheeler's 50 "years out" is the year 2070 the following chart provides background for his views:

Hmmm. Could Wheeler be right? When you take his observation in context it seems reasonable.


"We have 1,000 children die everyday worldwide because they don't have safe drinking water," Wheeler told CBS News chief Washington correspondent Major Garrett. "That's a crisis that I think we can solve. We know what goes into solving a crisis like that. It takes resources, it takes infrastructure and and the United States is working on that. But I really would like to see maybe the United Nations, the World Bank focus more on those problems today to try to save those children. Those thousand children each day, they have names, we know who they are."

That does seem to place the importance of Climate Change in a lower tier. Or does it?

If Wheeler were to ask the folks who died in the Camp Fire that destroyed the town of Paradise, California, about climate change ...oh, wait, he can't ask them. But most of the victims lost their homes and town understand the "threats" from Climate Change aren't 50 or 75 years out - the threats killed their friends and neighbors last year.

They aren't even "threats", they are impacts - cumulative impacts.

In fact, there are places where cumulative Climate Change impacts are the cause of the lack of safe drinking water; that lack kills many of the 1,000 children Wheeler tells us are dying daily around the world.

A Los Angeles Times story after Wheeler made his comments says it all in its headline Why the next decade will be critical in the fight against climate change. But a story the following week from the same writer From ruined bridges to dirty air, EPA scientists price out the cost of climate change gives us access to an economic impact projection that will startle some capitalists who muse about what riches they are leaving their descendants. They will, of course, begin to position their financial interests to avoid those costs.

But the question remains: Should Democrats, in an election too important to lose, lock themselves into advocating for policies addressing a problem the full impact of which will never be seen by any eligible voter alive on election day 2020? Does it leave Democrat vulnerable to propose policies which over the next decades address the gradual accumulation of impacts will affect relatively small groups of first world residents at any one period of time?

As noted in this blog previously over 40 years ago in 1976, after joining the United States House of Representatives, Al Gore held the "first congressional hearings on the climate change, and co-sponsored hearings on toxic waste and global warming."

About 25 years ago and 20 years after those first hearings, then Vice-President Gore reflected on his experienced reality in a 1995 New York Times article:

In 2013 in a TIME article The Battle Over Global Warming Is All in Your Head we read:


If it’s not a data deficit that’s preventing people from doing more on global warming, what is it? Blame our brains. Renee Lertzman, an applied researcher who focuses on the psychological dimensions of sustainability, explains that the kind of systemic threat that climate change poses to humans is “unique both psychologically and socially.” We face a minefield of mental barriers and issues that prevent us from confronting the threat.

For some, the answer lies in cognitive science. Daniel Gilbert, a professor of psychology at Harvard, has written about why our inability to deal with climate change is due in part to the way our mind is wired. Gilbert describes four key reasons ranging from the fact that global warming doesn’t take a human form — making it difficult for us to think of it as an enemy — to our brains’ failure to accurately perceive gradual change as opposed to rapid shifts. Climate change has occurred slowly enough for our minds to normalize it, which is precisely what makes it a deadly threat, as Gilbert writes, “because it fails to trip the brain’s alarm, leaving us soundly asleep in a burning bed.”

But in truth the "us" in Gilbert's burning bed is relatively few of us at any one time. And it will be a really dangerous gamble to assume that things are different from 2013 or 2016 if you want to defeat Trump with all his Wheelers out there explaining that while the danger is out there, but just really way, way out there.