"What I want to make French people understand – notably those who say ‘we hear the president, the government, they talk about the end of the world and we are talking about the end of the month’ – is that we are going to treat both, that we must treat both." - French President Emmanuel Macron of France in a November 27 speech addressing the open revolt of the “yellow vest” protesters objecting to costs of measures to reduce Climate Change.

Macron is the last of the "Third Way" politicians to gain office as the head of state in a Western Democracy, in the Tony Blair (Labour Party) - Bill Clinton (Democratic Party) tradition. The Third Way was created as a pro-capitalism intellectual re-evaluation of political policies within various center-left progressive movements in response to doubt regarding the economic viability of the state and the overuse of economic intervention policies.

Those economic intervention policies had previously been popularized by Keynesian Economics but in the latter quarter of the 20th Century contrasted with the rise of popularity the Neoliberal right that captured the Republican Party during that period.

Like many Third Way politicians, Macron is intellectually involved in issues such as Climate Change while totally uninvolved in determining how to address those issues in ways that won't create a psychologically depressed working class that would see in the world coming to an end a better outcome. 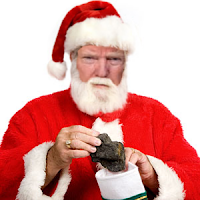 Depending on how you look at things, a coal-stuffed climate summit is either completely absurd—“beyond parody,” as one commentator put it—or merely appropriate. With each passing month, the threat posed by global warming grows clearer.

Last week, just as the [Conference of the Parties] session in Katowice was getting under way, the French President, Emmanuel Macron, suspended plans to raise that nation’s gasoline and diesel-fuel taxes. The increase had been intended to speed the transition to cleaner cars; the postponement came in response to violent protests by the so-called “yellow vest” movement. Demonstrators complained that Macron was worried about the end of the world, while they were worried about the end of the month. - Elizabeth Kolbert in "Coal for Christmas at the U.N. Climate Conference"

And that summarizes the problem for urbane (note - that is not "urban") in the Western World including the United States - they worry about abstractions like the end of the world as we know it probably coming sometime in the next century or two while struggling workers worry about being unable to pay the electric bill as the very real utility employee is now at the front door ready to turn off the power.

Meanwhile, Donald Trump offers lumps of coal which can be used to heat the house.

And so among all the various environmental climate change headlines came What France’s ‘Yellow Vest’ Protests Can Teach California. The young writer with much insight addresses the November election failure of Proposition 6 which would have repealed a recent gas tax increase adopted by the Legislature. As she explains: 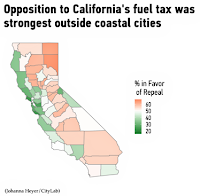 As the “yellow vest” protests erupt in France, Californians should recognize that many of the policies provoking outrage across the Atlantic are also stoking divisions in our own cities and suburbs.
Here in California, the gas tax that ignited the French protests brings to mind the most contentious proposition on last month’s midterm election ballot: Proposition 6, which would have repealed a gas tax implemented in 2017. The gas tax is a polarizing issue in the state and cost an Orange County senator his job. Although Prop 6 failed, a substantial 43 percent of Californians—most of them living outside urbanized coastal regions—did vote to get rid of the added cost at the pump.
On the surface, the gas tax seems fair: If people choose to drive rather than get around using more planet-friendly modes like public transportation, they should pay the price for contributing to climate change and pollution. And those who make more ecologically responsible choices—whether that’s walking, riding a bike, or using transit—should be rewarded.
But this way of thinking is stuck in an outdated notion of who lives—and drives—in California’s suburbs. ...Many Californians still imagine suburbs as “garden cities” where well-to-do white families enjoy peaceful living while eschewing the ethnic and socioeconomic diversity of the city. But the fact is, as wealthy millennial children of the suburbs increasingly migrate to urban hubs, many minority and low-income residents are being squeezed out.
The Bay Area is infamous for its extreme wealth inequality and an acute housing crisis that is driving many long-term residents—particularly low-income people and people of color—to outlying areas that have fewer job opportunities and are disconnected from the region’s public transportation network....
...In the Bay Area, low-income households’ third largest category of expenses is transportation, after housing and food. The rise of the gig economy means that more so-called super commuters (those who travel more than 90 minutes to work each day) are working multiple precarious jobs, often far from home, rather than commuting to and from one steady job during normal business hours.
...We are unfairly burdening the state’s already disadvantaged communities with the costs of our transition to a greener society, while excluding them from the benefits.....

As noted in this blog previously, the irony is that, California's extra effort in implementing anti-Climate Change policy notwithstanding, Climate Change is going to happen, at near-maximum catastrophic impact. The loss of housing and businesses in recent California wildfires and in earlier hurricanes represents the beginning of a century-long period of environmental changes resulting in new migration within the United States whenever and wherever state and local governments fail to adapt.