Everyone's using "equity." Does it mean anything? 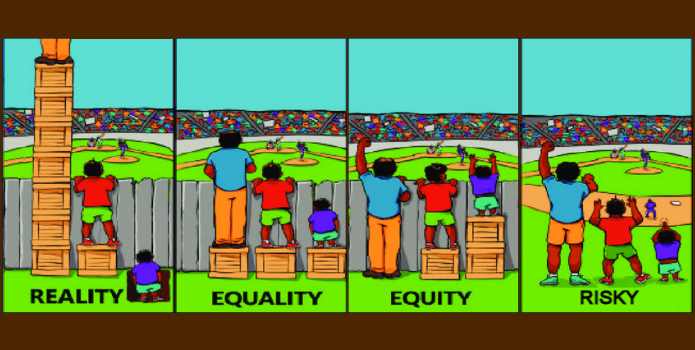 In recent years, certain advocates have created a discussion using "equity" capitalizing on the fact that in the context it is used it is a word without meaning.

As used finance, equity seemingly has a clear enough meaning. But does it? Or do we depend upon a court system to define it case-by-case?

In social sciences, the term equity refers to the principle of fairness. While it is often misused interchangeably with the principle of equality, equity encompasses a wide variety of social science models, programs, and strategies. Generally, when used equity does imply a lack of equality. The problem, of course, is that "fair" and "impartial" are words which derive their meanings from the point of view of the person uttering them. 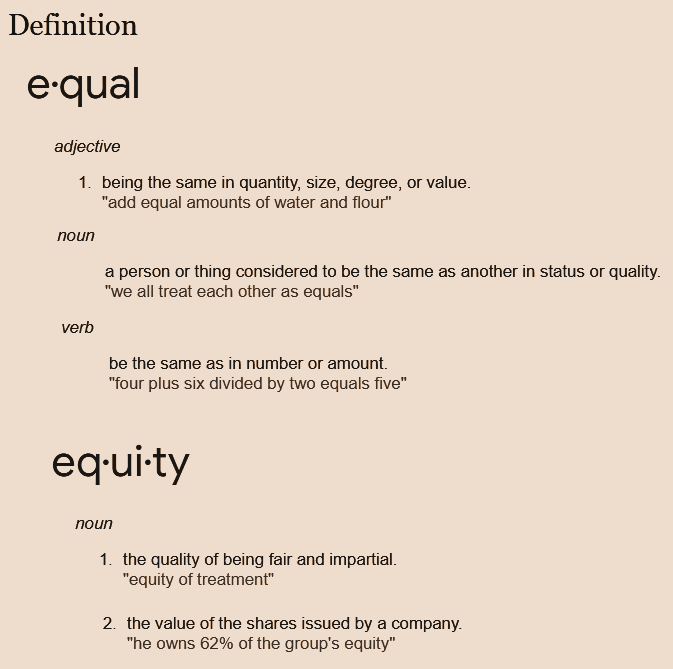 Enlightened despotism, aka benevolent despotism, was a form of government in the 18th century in which a despot pursued reforms such as legal, social, and educational reforms. Inspired by the Enlightenment, enlightened despots such as Frederick the Great and Peter The Great instituted administrative reform, religious toleration, and economic development but did not propose broad equity reforms that would undermine their sovereignty.

In the Declaration of Independence, "absolute" despotism is carefully offered as the cause for the American Revolution. The implication is that "enlightened" despotism would be ok.

It is in the context of that Declaration that we learn that some men of the Enlightenment time thought that "all men are created equal" and that they are "endowed by their creator" with some "unalienable rights" such as "life, liberty, and the pursuit of happiness."

If we ignore the likelihood that those men literally meant "men" and by "creator" meant some version of a god, we can speculate that within the right to the "pursuit of happiness" might be found the right to pursue equity.

If we speculate further,  a people might say they feel some "happiness" in life because within America their pursuit of equitable treatment - aka equity - was successful to some adequate level of satisfaction. Others might say their pursuit failed.

The good thing is, one can say the pursuit of equity is an unalienable right. But one must acknowledge that equity is, like all other elements of happiness, a judgement call with which you might not agree.

With that understanding, it is correct to state that disputes over how much equity is offered in our society will always be with us.

In California we see some confusion about the word. Consider the following chart:

Hispanics are now the largest ethnic group in California, slightly ahead of whites. Asians are the third largest ethnic group. Blacks constitute only 6% and everyone else makes up 3%. One of the more curious facts is the representation of these groups in the undergraduate student body at the University of California. Consider the following charts: 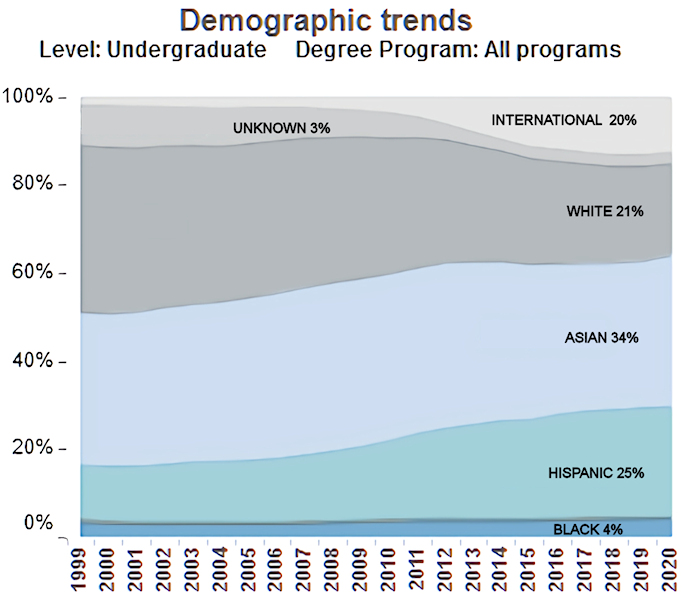 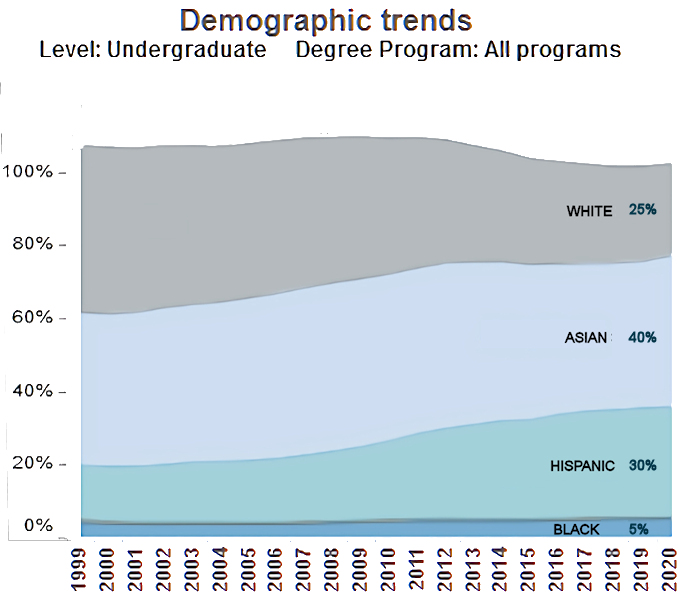 The top chart is what we get in reports. The problem with that chart is the inclusion of foreign students and unidentified students don't give us a picture. When you remove them from the count and recalculate the percentages we get a better idea. It's simple - Asians students make up nearly 3 times their portion of the population.

Why would that happen? The answer is their families push them harder to study and get good grades. It's that simple.

The question is: What constitutes equity when a subculture does what is asked of them specific to the objective they are seeking resulting in a receiving greater share? How on earth could anyone say equity can be found by any action other than rewarding those who work hardest?

Confused? Barbara A. Perry, a professor and director of presidential studies at the University of Virginia's Miller Center offered this clarity: “As a concept of fairness of the law, equity is meant as a remedy. If someone hurts you the person can be punished and assessed compensatory damage to make you whole again."

When you apply that thinking to a legal case, it is likely to be complicated. If you apply it to social science models, programs, and strategies it becomes a debate reflecting the nation's history of inequity.

The term equity reflects the point of view of the person uttering it, unfortunately. It is hard to visualize a world in which everyone thinks that they have been fairly treated.

The image at the beginning of this post deserves some thought. There are those who would argue that the solution to the equity problem would be to eliminate all barriers, not fund boxes. The problem with that is folks will get injured by hard hit "baseballs" more frequently without protection.

500,000 Americans dead in a year, 80% over 65; but many younger patients struggle after infections 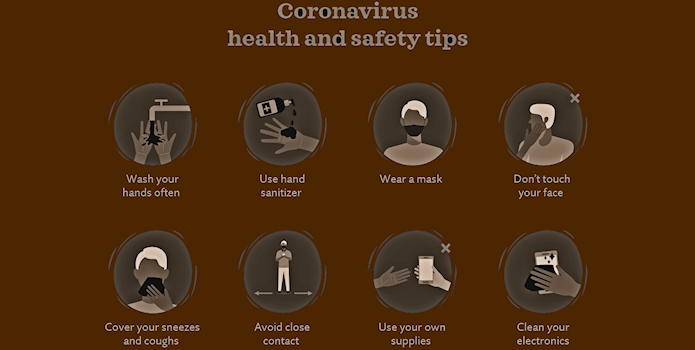 As the U.S. approaches 500,000 deaths from Covid-19 in a year, a realistic view has begun to be accepted as explained two weeks ago by Washington Post science writer Carolyn Johnson:

It has become clear that coronavirus variants can slip past some of the immunity generated by vaccines and prior infections. The virus is here to stay — and scientists will have to remain vigilant. Vaccines may have to be updated, perhaps regularly. And the world will have to prepare for the possibility, even the likelihood, that over the long term, the novel coronavirus will become a persistent disease threat, albeit one that could eventually end up closer to the flu or the common cold.

Here in California this morning another science writer, Lisa Krieger, tell us in The Mercury News:

A coronavirus variant first identified in Denmark is now surging through California and represents more than half of samples in 44 counties, according to new UC San Francisco data.
The variant, called L452R, appears to be more transmissible than the original strain of the virus, although it does not appear as contagious as the UK variant, scientists found.
Also worrisome is evidence that links it to worse outcomes, such as intensive care unit admission and death. Additionally, vaccinated people appeared to produce fewer antibodies in response to the variant, suggesting it might be more resistant to our immune defenses.
The variant “should likely be designated a variant of concern, warranting urgent follow-up investigation,” concludes Dr. Charles Chiu of UC San Francisco, whose lab is collaborating with the state’s Department of Public Health to seek cases of the new variant. The findings, which have not been peer reviewed, were released Monday morning.
The variant, which Chiu’s lab estimates to have emerged in California in May 2020, increased in prevalence from 0% to more than 50% of cases during the sampling period. It has been blamed for outbreaks at nursing homes, jails and the emergency department at Kaiser Permanente San Jose, where a staff member wearing an inflatable Christmas tree costume might have infected at least 90 people.

As noted here last August, there are no analogies to use when discussing the future of the coronavirus except Johnson's phrase "a persistent disease threat."

Both Moderna and Pfizer are working on boosters for variants. That is both reassuring and frustrating for those of us who have had our two shots. It's reassuring that they are recognizing the long term reality of the disease. But it's frustrating to note that a week after getting our second shot the long term future is in as yet untested booster shots.

Perhaps the saddest reality is the deaths of half-a-million Americans in a year, as reflected in stories like A Ripple Effect of Loss: U.S. Covid Deaths Approach 500,000. However, over a longer term Covid-Linked Syndrome in Children Is Growing, and Cases Are More Severe and Covid Survivors With Long-Term Symptoms Need Urgent Attention, Experts Say indicate we may have even more problems as the pandemic continues or settles down into regional or local epidemics.

And none of this reflects the Extended Economic Distortion that has been created by the attempts to contain the pandemic. The single most disturbing thing about living in the United States is knowing how little Americans know about their government and founding documents.

For instance, there is no mention of people being "created equal" in the Constitution. The closest one can come is Section 1 of the 14th Amendment which states:

On the other hand the Declaration of Independence has legal standing. Consider this:

The Declaration has been recognized as the founding act of law establishing the United States as a sovereign and independent nation, and Congress has placed it at the beginning of the U.S. Code, under the heading "The Organic Laws of the United States of America." The Supreme Court, however, has generally not considered it a part of the organic law of the country. For example, although the Declaration mentions a right to rebellion, this right, particularly with regard to violent rebellion, has not been recognized by the Supreme Court and other branches of the federal government. The most notable failure to uphold this right occurred when the Union put down the rebellion by the Southern Confederacy in the Civil War.

We are fortunate that Donald Trump's attorneys did not offer the text of the Declaration in their defense beginning with the discussing "The Organic Laws of the United States of America" as contained in the U.S. Code.

"Prudence, indeed, will dictate that Governments long established should not be changed for light and transient causes; and accordingly all experience hath shewn, that mankind are more disposed to suffer, while evils are sufferable, than to right themselves by abolishing the forms to which they are accustomed." But what if a third of the current American population believes "it is their right, it is their duty, to throw off" the current U.S. government?

Back "when the Union put down the rebellion by the Southern Confederacy in the Civil War" just 50 years after the War of 1812 finally gave the former British Colonies some stable independence, people were different. Right? No?

Exactly when does "a long train of abuses and usurpations" become long enough to say "no more?"

Perhaps the reality is that when, as was the case at the beginning of the Civil War, the military leadership was divided and, to a significant degree, the rank and file was state-oriented, a revolt against the national government was possible. But today the military is significantly national and we now have police who support stability over instability.

Of course that could change. There is the Declaration of Independence, an official part of the U.S. Code, an organic law that is part of the foundation of U.S. government,that authorizes a revolution: 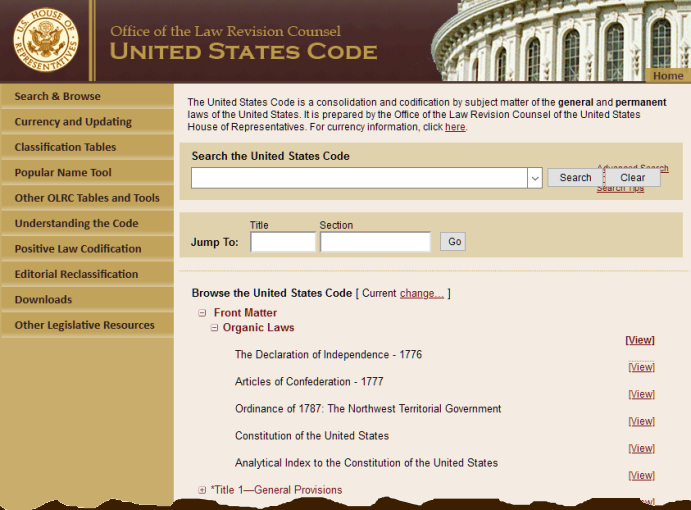 It's all about what we (and Trump's attorneys?) don't know.