"The news" in America can only be understood as "been there, done that" in the backdrop of history

Since January 2019 Susan Zirinsky, as the first woman CBS News President and Senior Executive Producer, has been responsible for CBS News broadcasts and the division's news presentation across all platforms including television, CBS News Radio, CBSNews.com and CBSN. Since her promotion she has offered what one can only assume is her hopes for the news. 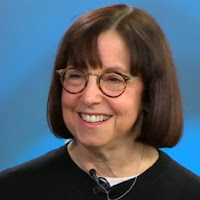 “The next two years as journalists are the most important two years. It’s time for us to reveal America to itself. The hunger for real, straight news is desperate.” - CBS News President Susan Zirinsky quoted in the New York Times June 17, 2019.

"The nation is divided. More than 73 million people voted for the candidate not elected. In order to heal that divide, we as journalists have to report on fairly in order to understand what separates us as people, we have to understand what they’re going through. Their beliefs, their guiding principles. We have to understand. We have to have empathy. To serve the American people, you have to ask the questions that get answers for all Americans. The most important thing we can do right now is get it right." - CBS News President Susan Zirinsky accepting the National Press Club's 2020 Fourth Estate Award on November 18, 2020.

It is hard to imagine, to visualize, how "journalists" report "fairly" the "news" in a context reflecting the time period of 2016-2020 in America. It was not a particularly unique period in American history but one would never know that from the "news" reporting on CBS or elsewhere.

Just as Cleveland's second term began, the Panic of 1893 struck the stock market and the nation experienced an economic depression (not a recession) that didn't end until 1897. At the end of his second term he had become one of the most unpopular U.S. presidents despite the fact that he won the popular vote in three elections.

If you read the Wikipedia entries on Cleveland and Harrison, what you can't help but notice is that the nature of the issues at the time created intensity. It is not a random happening that a Populist was on the the ballot in 1892. And as one might expect, the news media, albeit print only, was divided and not kind.

The issues were as real to people then as they are now. And they are the same issues. Racism separated "us as people" in that time. In the 1880's there were civil rights and immigration issues (the latter involving Chinese immigration). Cleveland couldn't get his Supreme Court nominee confirmed. In his second term there was the Pullman Strike during which he sent federal troops in to break the strike because the railroads carried the mail.

Donald Trump is unique as a person, of course. But the Electoral College selecting a President who did not get the majority of the vote is a longstanding tradition in our Republic which is not now, nor ever has been, a democracy. We need to get over it. But don't expect us to "heal that divide" which has been with us as long as George Washington's first term as explained in a previous post: 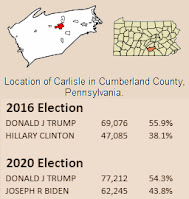 Carlisle, Pennsylvania, mentioned above is located in Cumberland County. Folks there today don't resent government like they did back in 1791, when the states had just become "united."

The table to the right shows Trump's wins in Cumberland County in the last two Presidential elections. We seem to think that our own generation's experiences and attitudes are not part of a continuous human existence.

Zirinsky's idea is that we need to to become informed regarding: "Their beliefs, their guiding principles. We have to understand. We have to have empathy."

The problem is this writer has always understood, as have others.

Simply, "empathy" does not resolve differences in political beliefs. What happened in Carlisle, Pennsylvania, in 1791 resulting in the deaths of two civilians happens today all over this nation. It happens because "dissidents" protesting, sometimes violently, stir an authoritarian response whether its in the republic of the United States or the Democratic Republic of China.

Zirinsky tell us: "To serve the American people, you have to ask the questions that get answers for all Americans." But the real answer is we don't agree.

Whether it is a tax protest in 1791 or the 1880's Chinese Exclusion Act and Scott Act (the first legislation in American history to place broad restrictions on immigration) or a 2010's withdrawal from participation in environmental protection and world trade, the American people are going to be divided. That is because the "answers" tell some, but not others, that we should tax booze to pay for changes.

Over the years this writer has always disagreed in varying degrees with the compromise solutions dreamed up by Congress, by the Lyndon Johnson/Bill Clinton traditional Democrats working with traditional Republicans ... you know, the solutions that forced black fathers to not live with the mothers of their children because of idiotic policies that only allowed assistance in single mother households or the solutions that imprisoned black men in huge numbers.

It has always been true that those who struggle within the passage of time and those who thrive within the passage of time are in totally different worlds. It is the impact of change that matters, and in this context "change" means "diversify, transform, adapt" which has not been easily embraced in the history of descendants of "traditionalists" among European migrants to the Americas. Nor by other such peoples elsewhere, for that matter.