Recent news reports in California's major newspapers indicate that there is one, maybe two, rarely three, tax increase initiatives circulating for signatures worth mentioning in stories regarding the State's budget problems. Reading those stories, you would never know there are nine (9) tax increase measures circulating right now. All have been discussed in previous posts.1

Now we read in the press that Governor Jerry "Moonbeam" Brown and the California Federation of Teachers (CFT) have negotiated a compromise that could permit a jointly sponsored initiative rather than continue with their current two competing initiatives, which are the ones that have received most of the press coverage.

The compromise measure would basically be Brown's initiative but with the sales tax increase dropped to ¼% while at the upper end of the income tax the increase would be higher, similar to the CFT initiative. The sales tax would still expire in 2016, but the income tax hike would be extended two more years. It has been submitted to the Attorney General.

Moonbeam is getting a lot of criticism about this compromise because it significantly shifts the tax increase proposal into the "class warfare" camp of taxing only the very wealthy, the so-called 1%. Moonbeam's gyrations with the CFT are not the primary subject of this post, however.

We Californians are being diverted from considering our state's problems. Most of the time, debate and discussion found in those news stories (as well as the comments about those stories on various web sites) all seem to be occurring between ideologues who either...
Lost in the midst of this rhetoric about tax initiative proposals are...
What one might think are the critical issues remain completely undebated and under-reported, lost in spin, with Moonbeam's camp being the best at spinning.

The fact is that Moonbeam and the CFT simply want money for the State General Fund to patch the significant holes that resulted as a side effect of The Great California Slump, which began with The Great Recession, created a significant loss of jobs in the private sector, and has destabilized the California economy.

Giving the Legislature and the Governor more tax money to spend however they see fit doesn't seem like a very good way to address The Great California Slump. From 1997-98 through 2010-11, cumulative disbursements from the State General Fund have exceeded cumulative receipts from revenue by a whopping $46.7 billion. This $46.7 billion deficit spending was approved at the time by the Legislators and the Governors. It is disturbing because we could have just as easily had a "rainy day fund" of $27± billion without any tax increases in the past four years.2

It's difficult to muster any positive feelings for a tax increase that doesn't specifically address improving California's economic future. Educating California's children for a 21st Century economy is the one clear way we can improve things for future generations.

One of the initiative measures being circulated for signatures right now was developed by activist heiress Molly Munger working with the California PTA. It receives far less press attention than the ones proposed by Moonbeam and the CFT even though the Sacramento Bee Editorial Board said:


Munger makes a compelling case that this is a once-in-lifetime chance to invest directly in the improved education of California's children. If her timing were different, and if Munger had first attempted to get her proposal passed through the Legislature, we'd be tempted to support it.

The Bee's Editorial Board knows no one could get any tax measure through the Legislature. It also knows Munger filed her measure before Brown. But they had to come up with some excuse to say that it represents "a compelling case that this is a once-in-lifetime chance to invest directly in the improved education of California's children," but....

The case Munger makes is compelling because her measure is far, far better than Governor Brown's precisely because Munger's focuses on improving the education and hopefully the economic potential of the next generation.

Munger's measure is complicated but carefully crafted. Here's a summary of how it would work if adopted:
Munger's measure does not offer the same emotional content as the CFT measure or the Moonbeam-CFT compromise measure. Here is a comparison of impact of the measures on various levels of taxable family income (meaning a two-earner family): 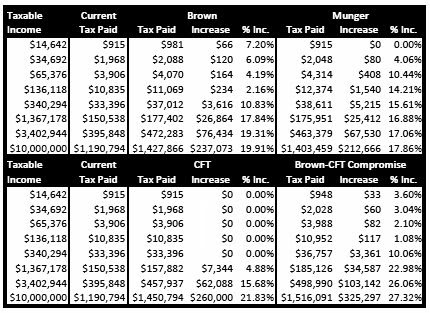 The difference between the measures is one appeals to the idea that we can simply tax the rich to solve our problems, an idea that has a strong emotional appeal right now. Many want to ignore the idea that there is a limit on how much California can attempt to tax the so-called wealthy "1%". The simple fact is that companies can move their "headquarters" out of California. And if their executives and major investors move their "primary" residences out of California (keeping both the Carmel "beach bungalow" and the Tahoe "cabin", of course), those taxable profits from future high tech IPO's would leave California also.

It is dangerous when a politician like Brown chooses to compromise with those selling the emotions of class warfare. He could have backed Munger's measure as does the California PTA.

I describe Brown's approach as The Moonbeam Complex Free Up General Fund Money and Fix Nothing Tax Increase Initiative because that is what it is. Yes, some of the money will be applied to education and public safety, but much of it will free up State General Fund monies for the Legislature and Governor to play with. Because the taxes expire in 2016, they offer no potential solution to problems resulting from The Great California Slump. And in terms of any meaningful policy goals, Moonbeam's measure offers nothing.

California voters have good reasons to approve Munger's measure as it represents a thoughtful approach to the future of our State. They should reject any of the measures carrying Brown's endorsement.

1This post is a followup to a series of posts beginning in December 2011 on tax initiative proposals:
2Here is the past fourteen years of the State General Fund cash disbursements and cash receipts from revenues (from the June Year End Statements prepared by the State Controller): 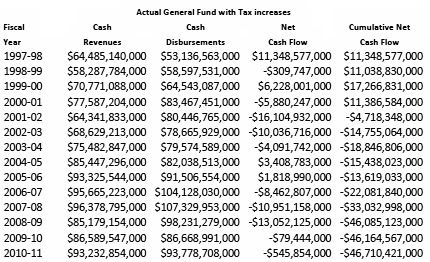 Apparently, we simply cannot keep from spending more than we are willing to pay in taxes. And yet, in hindsight we could have been responsible with our tax money during that period leaving us with a sufficient rainy day fund that, without any tax increases, could have carried us through 2020, something like this: 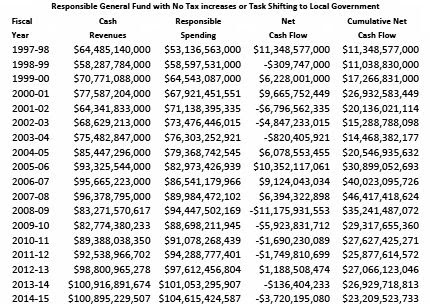 Yes, that's hindsight. But the conservative right has been given their anti-tax argument handed to them on a platter by irresponsible Legislators pandering to constituencies, the latter being us.
Posted by Michael O'Faolain - at 12:31 PM No comments: