25 years ago regulators started undoing electricty reliability. Now it's to be electricity-only homes? 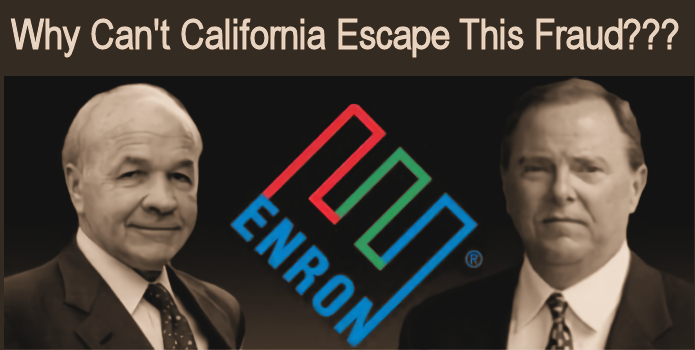 "PG&E has had its share of massive blackouts since the state deregulated utilities in 1996. Some have been planned, others have not."

So begins an October 2019 in-depth news story on the electric grid. And we're offered this story:

The California Energy Commission cleared the way Wednesday for six local governments to limit the use of natural gas in many new buildings. The policies, which encourage the installation of all-electric appliances, are scheduled to take effect in January.
Environmental advocates pushing to scale back fossil fuels hailed the commission’s move as a victory, but opponents argue that the gas bans will increase costs, harm businesses and limit consumer choice. Some noted that the all-electric push comes despite Pacific Gas & Electric Co.’s warning that wildfire-prevention power outages could persist for a decade.

For residents depending upon reliable energy, an inherent critical conflict exists between California's clean energy goals and the reality of electricity delivery. That should not have to be pointed out to the Energy Commission. But apparently it does.

Perhaps what happened in Texas recently needs to be emphasized. People froze to death because of a long-term power failure. What people don't seem to get is that a 99.90% reliability for a power company means 8.76 hours a year without power per home. Our goal should be less than an hour. We cannot accomplish that without undoing our regulatory history.

In 1996 the California Legislature passed AB1890 which provided that after March 31, 1998, all customers located in the service territories of the investor-owned utilities (IOUs) - Pacific Gas & Electric, San Diego Gas & Electric, Southern California Edison, PacifiCorp, Sierra Pacific Power, or Bear Valley Electric - would be allowed to shop for power in an open market. No longer would customers be restricted to buying power only from their local utility company. Beginning in 1998 32.7 million Californians living in 11+ million homes went out, compared deals, and picked the one which best meets their needs.

In effect, it was one of the numerous actions taken beginning in the Ronald Reagan years as Governor (1967-75) to undo the progressive policies of Governor Hiram Johnson who 50 years earlier responded to an epidemic of political and civic corruption by expanding the role of government in regulating the economy by doing such things as:

This led to utility regulation which was solid until 1996. It only took four years to fail with the 2000–01 California electricity crisis created by the manipulations of Enron and others.

To make a long story short our residential electric bills doubled in two years but most of the money did not go to maintenance.

The Legislature, regulatory agencies, and elected state executives need to face a realistic picture of the overall housing cost situation. Part of that is the cost of energy. It's unclear if the regulators have even given consideration to the cost of replacing problematic and aging power distribution systems when considering eliminating gas appliances.

The lower income half of Californians cannot afford to have energy regulators keep making mistakes. An energy plan requires more than a single goal which is exactly what focusing on emissions is. If electricity is the discussed sole emission-free energy source for the future, the discussion must include generation, distribution, reliability, and costs.

Reliability to every customer must be achieved at 99.99%, with cost at a very affordable level. When you're facing a future of freezing or cooking people, you can't just examine emission levels.

Will the American economy be "at anchor" with nowhere to go? An Extended Economic Distortion?

The term Extended Economic Distortion was introduced in these posts on May 2, 2020. Perhaps no situation illustrates what that means more than the shipping chaos. And we'll explore that further after noting the confusing (chaotic?) continuing reports on employment in the press flooding the headlines because...you guessed it...those reporting it are sitting on their behinds simply rewriting news releases instead of reporting.

That doesn't count the folks who aren't getting jobless aid. Do we call them "the unutilized?"

The news Thursday told us in the week ended February 27, 745,000± people not currently on the roles of the underutilized filed claims for Unemployment, up 9,000 from the previous week. Some stories even tell us that about 437,000 others who filed claims for Pandemic Unemployment Assistance, a program for business owners, self-employed workers, independent contractors, and those with a limited work history who are out of business or have significantly reduced their services as a direct result of the pandemic.

If you skim the articles you might get the impression that the 745,000± newly unemployed are up (or down) a little from the norm. Actually that is three times the "normal" claimants. And that's after the pandemic settled down a bit.

What's fascinating is the graphics. Compare these two charts:

It is quite obvious that the graph used to show initial claims has been "adjusted" to reflect the 7 million claims filed in March of 2020. That makes it possible to minimize the difference between early 2020 and early 2021. Again, the number of claims is three times those of early 2020.

Because it was the beginning of this month, Friday we did get information on the monthly employment statistics including in-depth numbers which can be compared as follows: 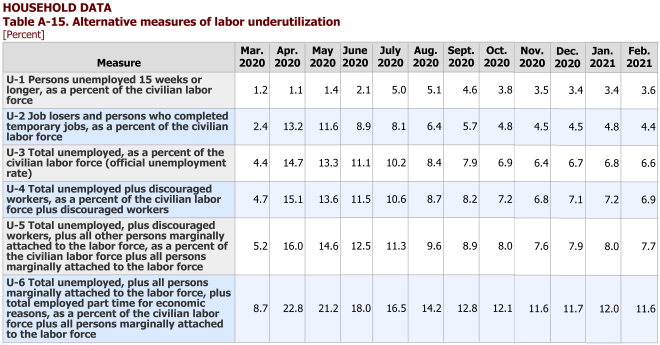 Looking at the first line, we should be getting a hint about the problem - three times as many folks find themselves unemployed 15 weeks or longer. At the bottom line, we learn we have have about 11.6 million in employment "labor underutilization"

Not on this chart, we now know we have at least another 6.4 million in contract "labor underutilization."

Or, to put it another way, at least 11% of the labor force is effectively out-of-work as we generally understand the term.

All of which brings us back to the Port of Los Angeles which initially saw a decline in imports noted here previously, but now we must have a chart that can help us visualize the chaos in our supply chain:

There is no question that the large Covid finanicial relief packages previously approved by Congress contributed to this retail "buying spree." Now it appears another large package will be on its way.