Rare Earth Elements: Is a struggling California mine going to save our near-term economic future

Many American companies are holding their breath to see what China is going to do with its, and California's, rare earth elements (REE's). But despite the fact that the Trump Administration in 2017 picked up the pieces of a Democratic failure from 2010, you probably had never heard of REE's even a year ago.

The American news media makes it difficult to follow the real activity of the Trump Administration. It is as if they are parents noticing that their 7-year-old kid used bad words, called other kids names, and yelled a lot without noticing the kid was quietly killing cats to see what happens when they die. And liberals love the coverage. For instance.... 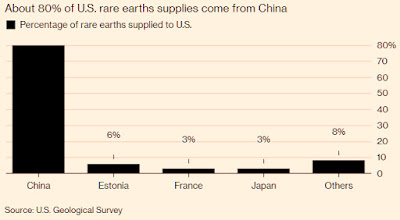 On December 20, 2017, liberal media darling NPR ran a story From 'Covfefe' To Slamming CNN: Trump's Year In Tweets. They did not report on that day, or any future day, that the President signed Executive Order 13817 which directed his Administration to develop “'a strategy to reduce the Nation’s reliance on critical minerals' that are largely imported" because of the graph to the right.

The Executive Order was among the important actions taken by Trump in his 11th month in office to prepare for the Trade War with China he would initiate a month later by placing tariffs on solar panels and washing machines. (Oh yeah, and I think that month he called somebody a name in a tweet which got extensive news coverage.)

As explained here during Trump's first month in office in a February 16, 2017, post Why you should fear Trumpism's Steve Bannon: war with China within 8 years and other reasons militant hostility towards China was being advocated from the beginning within Trump's campaign organization.

As explained two years later in a post The U.S. "China threat" disinformation industry. It's ramping up agitation for a war with China in East Asia which America cannot possibly win! "


One change is recent. In December 2017 and January 2018, the Trump Administration put forth a National Security Strategy and National Defense Strategy that shifted from a focus on terrorism to a focus on China-as-a-hostile-nation. Not surprisingly, key national security positions  are being filled with China hawks from a variety of viewpoints - Neoliberals and Neoconservatives, as well as economic nationalists, all of whom for their own ideological reasons want an aggressive policy toward China.

If you have followed the escalation since that post on February 16, 2017, you know that most recently China indicated it would stop exporting rare earth element (REE) minerals to the U.S. in response to the U.S. hostility. Which brings us to an article published this week U.S. to Ensure Rare-Earth Supply Amid Trade War With China which discusses the newly released Commerce Department Report A Federal Strategy to Ensure Secure and Reliable Supplies of Critical Minerals. 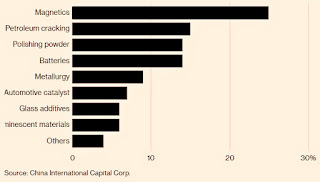 Since 2007, China has restricted exports of REEs and imposed export tariffs, both to conserve resources and to give preference to Chinese manufacturers.  In 2009, China supplied more than 96% of the world's REEs. In 2010 as noted in the Popular Science article Shortage of Rare Earth Minerals May Cripple U.S. High-Tech, Scientists Warn Congress:


Experts testified that China's state-owned mines had set artificially low prices for the rare earth market, and that Chinese manufacturers had also forced most U.S. rare earth and permanent magnet manufacturers out of business. Rare earth magnets represent a major component in Toyota's Prius hybrid and other clean tech.
On September 22, 2010, China quietly enacted a ban on exports of rare earths to Japan, a move suspected to be in retaliation for the Japanese arrest of a Chinese trawler captain in a territorial dispute.

As Japan and China were (and are) the only sources for rare-earth magnetic material used in the U.S., the Democrat-controlled House Committee on Science and Technology scheduled on September 23, 2010, the review of a detailed bill, a bill which ultimately died in committee in the Democrat-controlled Senate, to subsidize the revival of the American rare-earths industry, including the reopening of the Mountain Pass mine. 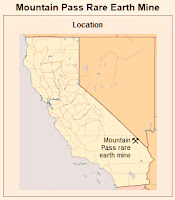 Almost all Americans, including most Californians, are unaware that the only producing rare earth mine in the United States is the Mountain Pass Rare Earth Mine, an open-pit mine of rare-earth elements on the south flank of the Clark Mountain Range, just north of the unincorporated community of Mountain Pass, California.

The Mountain Pass deposit was discovered in 1949 by a uranium prospector who noticed anomalously high radioactivity. The Molybdenum Corporation of America bought the mining claims, and began small-scale production in 1952. 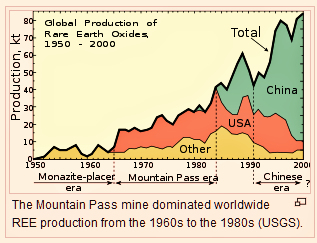 Production expanded greatly in the 1960s, to supply demand for europium used in color television screens. Between 1965 and 1995, the mine supplied most of the worldwide rare-earth metals consumption (see graph).

Operating under the name MP Materials mining operations resumed in January 2018. According to the South China Morning Post (SCMP) article Caught between Trump and its biggest market, America’s sole rare earths mine is an unusual victim in the US-China trade war: "The operator of the Mountain Pass mine in California said it will kick-start its own processing operation by the end of 2020, after China last week more than doubled an import duty on concentrates to 25 per cent effective June 1." (Click on the image below to view the mine website.) 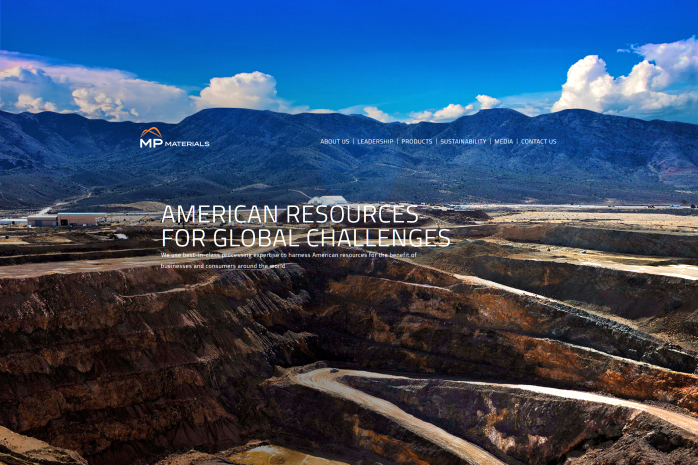 Getting this up and running as fast as possible seems like a no-brainer  But complex economic and environmental issues control the agenda as mentioned in the SXMP article. Even the Trump Administration had to forego simplicity as the U.S. has not retaliated against the Chinese tariffs on REE's even though Trump wanted to impose a 10 per cent tariff in July.

The mine has a history of environmental issues.  It was acquired by Union Oil (Unocal) in 1977.  A few years later problems became evident, per Wikipedia:


In the 1980s, the company began piping wastewater up to 14 miles to evaporation ponds on or near Ivanpah Dry Lake, east of Interstate 15 near Nevada. This pipeline repeatedly ruptured during cleaning operations to remove mineral deposits called scale. The scale is radioactive because of the presence of thorium and radium, which occur naturally in the rare-earth ore. A federal investigation later found that some 60 spills—some unreported—occurred between 1984 and 1998, when the pipeline and chemical processing at the mine were shut down. In all, about 600,000 gallons of radioactive and other hazardous waste flowed onto the desert floor, according to federal authorities. By the end of the 1990s, Unocal was served with a cleanup order and a San Bernardino County district attorney's lawsuit. The company paid more than $1.4 million in fines and settlements. After preparing a cleanup plan and completing an extensive environmental study, Unocal in 2004 won approval of a county permit that allowed the mine to operate for another 30 years. The mine also passed a key county inspection in 2007.

The ultimate problem facing the United States and the Trump Administration is that whether American companies pay tariffs on imports of REE"s and products containing REE's, or ultimately use products derived from American REE's. Either way costs are going to rise on things Americans use.

“This trade war, and the fact that the US has not retaliated against the unilateral tariff on our products highlights [America’s] reliance on Chinese rare earth products supply,” Las Vegas-based MP Material’s chief executive, Michael Rosenthal, told the South China Morning Post (link above). “It focuses American manufacturers’ and government officials’ attention back on what we are trying to do and can do.”

The State of California and local communities can benefit from the success of the Mountain Pass Mine as can be seen from their employment site: 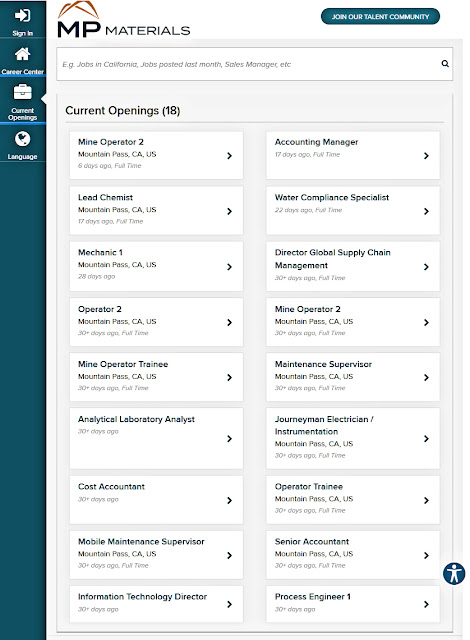 You should hope they find the employees they need in this low unemployment time  and, somehow, find a Congressional majority that can assist because there is something you'll need next year that depends on one of the REE's.

In the meantime, we need to ignore Trump's tweets as they do not constitute any lawful directive or official policy - just keep watching for stories about dead cats. One dead Chinese cat could mean a lot of dead American soldiers, sailors and pilots.
Posted by Michael O'Faolain - at 2:54 PM