The 2019 California Democratic Party Convention: Political parties are only winners and losers, and losers can't implement policy ideas, even good ones.

From the press coverage of the Party’s Convention in San Francisco, you would never know an important decision was made. Unfortunately, the personality-oriented press covered the campaigning of 14 (of 23) declared Democratic Presidential candidates at that convention.

Unfortunately, past accomplishments - implemented policies such as low- or no-tuition college in their home states (i.e. Bernie Sanders' high tuition Vermont) - are not the measurement being used by the voters or the press to find an attractive candidate. In the 21st Century it is having an exciting personality and catering to bias, not ability and past policy successes, that appeal to Americans.

Fortunately, picking among the Democratic Presidential candidates at that convention was not on the agenda. Instead most of the delegates were looking at political reality.

Hicks, who won 57% of the vote in Saturday’s election running against six other candidates, is president of the Los Angeles County Federation of Labor, AFL-CIO, (LA Fed). It is comprised of over 300 local unions that represent over 800,000 workers in virtually every key industry – transportation and goods movement, entertainment and media, janitorial and hospitality services, education, construction, government, retail health care and communications.

Raised by a single mother in Fort Worth, Texas, Hicks saw first-hand the challenges of attaining the American Dream. His mother was a bookkeeper, his grandfather a grocery clerk and his grandmother a teacher’s aide. Their hard work inspired Rusty to a life of service to ensure that the voices of working people are heard on the job, in their communities, and at the ballot box. This is why Hicks served as the California Political Director for the 2008 Obama for America campaign.

Hicks holds the rank of Lieutenant in the United States Navy Reserve where he serves as an Intelligence Officer. In 2013, Rusty completed a one-year deployment to Afghanistan where he supported the Combined Joint Special Operations Task Force-Afghanistan. His accolades include the Defense Meritorious Service Medal, the Navy Achievement Medal, and the Afghanistan Campaign Medal.

He is also a graduate of Loyola Law School and Austin College. He resides in Pasadena with his wife, Sandra Sanchez, and their dog Charlie.

Bay Area activist Kimberly Ellis, who has served since 2010 as Executive Director of Emerge California that seeks to identify and help more women and minorities in California be elected to public office, received 36% of the vote. With Ellis appealing to supporters of Vermont Sen. Bernie Sanders and, having worked only in political activism, concerns were expressed that the recently floundering Party organization needed to regain the discipline and energy to retain the Democratic legislative majorities (and hopefully the current supermajorities).

Hicks had the backing of six of the state’s eight statewide officeholders, most of the major unions and a wide range of California legislators and members of Congress, all of whom were aware that despite its superficial reputation as a Democratic stronghold, California's electorate geography looks like the Assembly District map to the left. In fact, by-county results of Governor Gavin Newsom's election in 2018 is shown below.

According to news reports Hicks said he has plotted out a plan for his first 100 days as party leader, including increasing efforts to train grass-roots activists and to reach out to conservative and moderate areas of California, including the Central Valley.

The reality was clear for California Democrats who want to win. As noted in the Politico article Labor anger over Green New Deal greets 2020 contenders in California:


Blue-collar union workers in solidly Democratic California are rejecting "Green New Deal" politics, a possible preview of troubles for 2020 presidential hopefuls in Rust Belt states like Pennsylvania and Ohio.
Robbie Hunter, president of the state Building and Construction Trades Council — which represents more than 400,000 workers — says that dozens of his members plan a major “Blue Collar Revolution” demonstration Saturday morning at the California Democratic Party convention in San Francisco, which will be attended by 14 of the Democratic presidential contenders and 5,000 delegates and guests.
The effort aims to send a message that the party is in danger of eroding a critical base if it continues to back the Green New Deal resolution being pushed in Washington, D.C. by Rep. Alexandria Ocasio-Cortez (D-N.Y.) and her allies. Hunter argues the measure's goals could endanger thousands of jobs in the Southern California oil industry alone.
“All it does is do what the Democratic Party seems to be very good at lately — which is export our jobs, while doing nothing for the end game, which is the environmental,’’ Hunter said.
“The Green New Deal may be the darling of the Democratic Party — but it really divides the Democrats on a fault line, which is more of the elites against the working class Democrats who are concerned about losing their jobs," said Jessica Levinson, a member of the Los Angeles Ethics Commission and a professor who teaches politics and ethics at Loyola Law School.
Lifelong union members “don’t necessarily want to be retrained’’ for other, greener work spots — “nor is it even possible,’’ says Levinson. She predicts with the 2020 election looming, Democratic leaders will have to wrestle with the fact that “unlike the Mueller report and impeachment and indictment — people vote on whether or not they’re going to lose their job.”

With the election of a leader from organized labor, the focus to win of the California Democratic Party ought to inspire a shift in other state Democratic Parties and the National Democratic Party. Across the nation Democrats have one, and only one, problem which can be seen on this map: 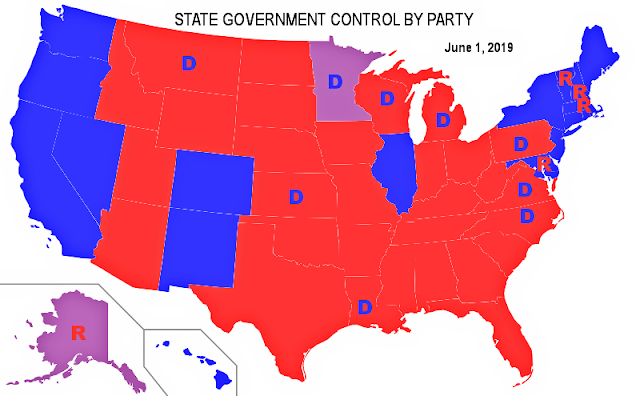 The color of each state - red for Republican, Blue for Democrat, purple for split - indicates which party
controls the legislature. The colored letters indicate in which states the Governor is of a different party.


California Governor Gavin Newsom this past week invited any women living in the states that just passed abortion restriction laws who need an abortion to come to California. That also should have communicated the obvious. If you live in a state colored red, your problems won't be with the Supreme Court, the President, or Congress.  Your problems will be with the members of your state legislature - they need to be replaced.

You achieve that by having state parties run by people who focus on getting Democratic candidates elected not on economic and social policy details. When you don't have that focus, preferring to talk among yourselves and looking down on the laboring class, you get abortion restriction laws and bathroom use restriction laws - in other words you lose bigly.

People who got elected have designed California's Green and Gold Deal, an approach that seeks to address the economic issues related to Climate Change policy. So far it has worked and it needs to continue that way. Otherwise, candidates entranced by the green lights off to the left will make us all losers.
Posted by Michael O'Faolain - at 2:48 PM