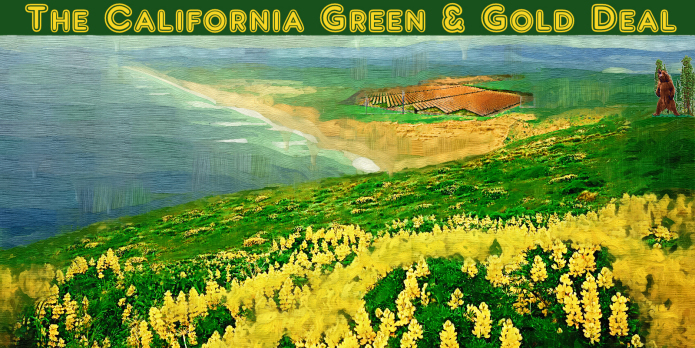 Is it déjà vu when California's political scene seems to look like it did six decades ago?

I am a native Californian who came of age when Pat Brown (Jerry's dad) was Governor. His term started in 1959, 60 years ago.

In 1960 Brown signed the California Master Plan for Higher Education defining the roles of the University of California, the California State University, and California Community College systems, and providing tuition-free higher education for California students. In his second term he signed into law the Rumford Fair Housing Act, which provided that landlords could not deny people housing because of ethnicity, religion, sex, marital status, physical handicap, or familial status. He advocated gun control and proposed that the death penalty be abolished.

His infrastructure projects are considered key to creating California's long-term economic strength:
But he was blamed for the civil disorders of the Watts riots and the early anti–Vietnam War demonstrations at U.C. Berkeley, resulting in the loss of his 1966 election bid for a third term to Ronald Reagan. 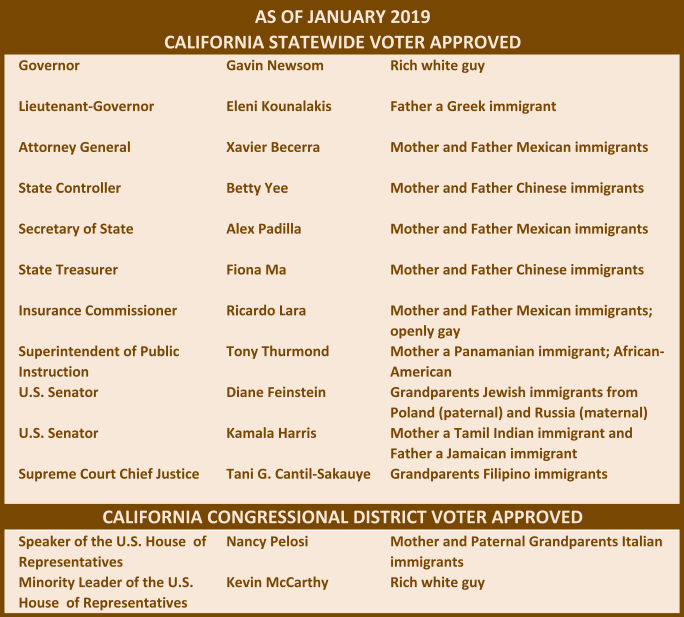 California has the world's fifth largest economy and is the world's 36th largest country. Well...it isn't actually a country, but it sure feels like it right now. This is because we are forced to advance a version of states' rights.

California, the home of Silicon Valley, because of the Republican Congress refusal to regulate corporations in June of 2018 found it necessary to adopt the California Consumer Privacy Act of 2018 (CCPA) which affords California residents an array of new rights, starting with the right to be informed about what kinds of personal data companies have collected and why it was collected.

This issue is extremely important in the 21st Century and California was forced to address the failure of the federal government. But it isn't even the most significant need for California to assert a states' rights agenda.

Trump has challenged California's core identity. California is, and will, fight back. And he and middle America better take a long look at the heritage of our elected officials listed in the chart above. 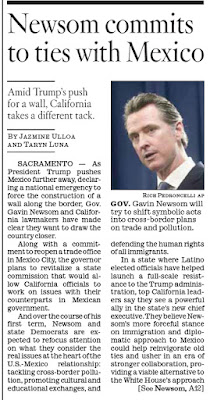 California officials are directly challenging the Trump Administration's trade, immigration and border policies. As explained in this blog in The Roles of Migration and Spain, not England, in California History and The essential Pacific-centric world view of California's economy and culture California historically was part of New Spain then Mexico and has over 400 years of trade history with Asia.

Simply California does not share an Atlantic European/African perspective with the Eastern United States having had no historical colonial or sovereign ties to Britain or France. California's coastline is on the Pacific Ocean facing China, Korea, Japan, and Siberia. It shares a southern border with Mexico.

On the front page of the Sunday Los Angeles Times, we read that "over the course of his first term, Newsom and state Democrats are expected to refocus attention on what they consider the real issues at the heart of the U.S.-Mexico relationship."(Click on the image to read the article.)

Trump's anti-immigration attitude it is admittedly confusing since Trump's paternal grandparents were German Lutheran immigrants from Bavaria and his mother Mary Anne MacLeod was an immigrant born in Tong, Lewis, Scotland. Further his wife is a Slovenian immigrant Melania Knauss. It is likely that Trump's attitude can be attributed to racist attitudes towards people from other than Northern and Central Europe.

Truthfully, from both a Progressive policy advocacy and a political power standpoint, California is where no other state can be. The Governor and the Legislature are putting together further policy advances in pre-school through community college education, higher education, health care, low-and-moderate income housing, programs for the homeless, and criminal justice reform. The City of Stockton is testing whether a long-term basic income program is a viable approach to lifting residents out of poverty and state officials are discussing the idea of a universal basic income as they watch Stockton's test.

California political leadership is doing all this while recognizing that in the context of the economy when starting at the top there’s nowhere to go but down. Former Gov. Jerry Brown has been preparing for coming economic hard times for years now. By the end of next July, the state is projected to have $13 billion socked away for a rainy day. But most analysts say that cushion will only last a year or two in the face of even a moderate recession.

Recessions tend to have a disproportionate impact on investment returns and 30%± of the state’s discretionary spending comes from the top 1% of earners, the investor class, because its top marginal income tax rate of 12.3% is the highest state income tax rate in the country. That tax rate was approved by the voters in 2012 and in 2016 they extended it through 2030. Governor Newsom and the Legislature are considering policy changes to mediate the greater budgetary risks resulting from sharing the economy's general dependency on this Gilded Age pattern of wealth creation. (See in this blog After the 21st Century Gilded Age economy collapses.)

Climate Change. In her book The Grid: The Fraying Wires Between Americans and Our Energy Future, author Gretchen Bakke notes  (emphasis added):


Transitioning to sustainability is the big, long-term challenge. But left out of this picture is the fact that for the most part, America does not run on gas, oil, or coal any more than we may one day run on wind, solar, or tidal power. America runs on electricity.

It has been said that no other technical innovation had such a far-reaching impact on modern civilization as the creation of a reliable system of electricity generation and transmission. While certainly it had an impact on living in the 20th Century, the "lifestyle" changes brought on by electronic "devices" in the early 21st Century have locked into our brains (in some cases literally) the need for reliable electricity. 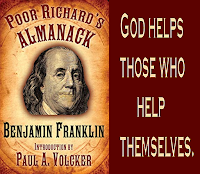 The problem for California is that the electrical transmission system is literally burning up the state. Recent wildfires have resulted in the deaths of many California senior citizens. Those fires are the result of the impacts of Climate Change.

Climate Change is, of course, the most ominous threat to the future well-being of younger Californians. It is very clear that we residents of the world's fifth largest economy cannot depend upon the United States to address Climate Change because of attitudes dominating politics in the central and southern U.S. populace. Simply we have to pay attention to the oft-repeated advice of Benjamin Franklin, who among the Found Fathers of the United States was the most prominent non-slaveholder, author, political theorist, scientist, and diplomat as well as the founder of Philadelphia's first fire department and the University of Pennsylvania.

On behalf of our children and grandchildren, we must help ourselves. And so we have.

The State is committed to assuring that its massive global climate change agenda succeeds including its commitment to Reducing Greenhouse Gas Emissions to 40% Below 1990 levels by 2030 and implementing it's Safeguarding California Climate Change Adaptation Policy.

California’s cap-and-trade program is one of the strongest market-based mechanisms in the nation to combat climate change. Outgoing Governor Jerry Brown working with Legislative leaders last year extended the state's cap-and-trade program through 2030 with supermajority support that included votes from some Republicans. Incoming Governor Gavin Newsom intends to have California “maintain leadership in this space.”

We will continue to do what we need to do even if that means denying U.S. policy that risks the lives of coming generations. As noted here in the post "Clear waters and green mountains are mountains of gold and silver." Seeking a Beautiful China and California together in harmony for our grandchildren:


We need to be seeking together in harmony a beautiful China and California with clear waters and green mountains for our grandchildren. Xi and Brown are making the effort. So should all of us.

to the Native American tribes living near the Pacific Ocean, including the Yurok people and the Tule River Tribe among others. One other species of redwood lives today, the dawn redwood, native to Lichuan, in southwestern Hubei province of China, an area which was home to sophisticated Neolithic cultures.

In the coming months The Redwood Guardian will continue to advocate for a California that protects the future of all the world's redwood trees and the generations that will live among them, as well as the Gray Whales and other Pacific Ocean species always in danger.

We can only hope that more Americans in other states will grow to understand that the 21st Century already offers new fundamental challenges to how we understand the Earth and humanity, challenges that must be met now.
Posted by Michael O'Faolain - at 12:40 PM