Trump's campaign in 2020 intends to win by gaining Hispanic voters using the ignorance of Democrats about Latinos. They could succeed!

Here are two "Latino" politicians working to get Donald Trump reelected in 2020, one unintentionally: 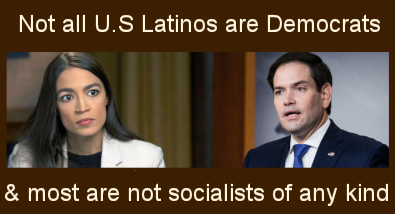 If you've been exploring caves in Thailand for the past six years, you may not know who they are. If you are a well-informed voter, you still may not understand who they are. We'll take that up in a minute.

But first, we all have to understand a word as it is generally used in the United States related to politics and elections - Latino. It's pretty simple. It means "of or relating to people of Latin-American descent."

Of course, when I say it's simple, it really isn't.

Latin America is a group of countries and dependencies in the Western Hemisphere where Romance languages such as Spanish, Portuguese, and French are predominantly spoken; it is broader than the terms Ibero-America or Hispanic America.... Today, areas of Canada and the United States (with the exception of Puerto Rico) where Spanish, Portuguese and French are predominant are typically not included in definitions of Latin America.
Latin America consists of 13 dependencies and 20 countries which cover an area that stretches from the northern border of Mexico to the southern tip of South America, including the Caribbean....
Latin America can be subdivided into several subregions based on geography, politics, demographics and culture. If defined as all of the Americas south of the United States, the basic geographical subregions are North America, Central America, the Caribbean and South America; the latter contains further politico-geographical subdivisions such as the Southern Cone, the Guianas and the Andean states. It may be subdivided on linguistic grounds into Hispanic America, Portuguese America and French America.
Included are Argentina, Bolivia, Brazil, Chile, Colombia, Costa Rica, Cuba, Dominican Republic, Ecuador, El Salvador, French Guiana*, Guadeloupe*, Guatemala, Haiti, Honduras, Martinique*, Mexico, Nicaragua, Panama, Paraguay, Peru, Puerto Rico*, Saint Barthélemy*, Saint Martin*, Uruguay, Venezuela (*not a sovereign state ).

To outsiders it is really weird to see Americans lump together people from Argentina, Cuba, Honduras, Mexico, and Puerto Rico. Would they really do that with European nationalities such as Polish and Italian?

After all, Jorge Mario Bergoglio was born on December 17, 1936, in Flores, a neighborhood of Buenos Aires, Argentina. He would be called a Latino by most Americans. Here's his picture both when young and today:

The Deplorables certainly wouldn't want the likes of him getting through Trump's wall. Or perhaps they would just  be confused....

Which is why we have this headline... 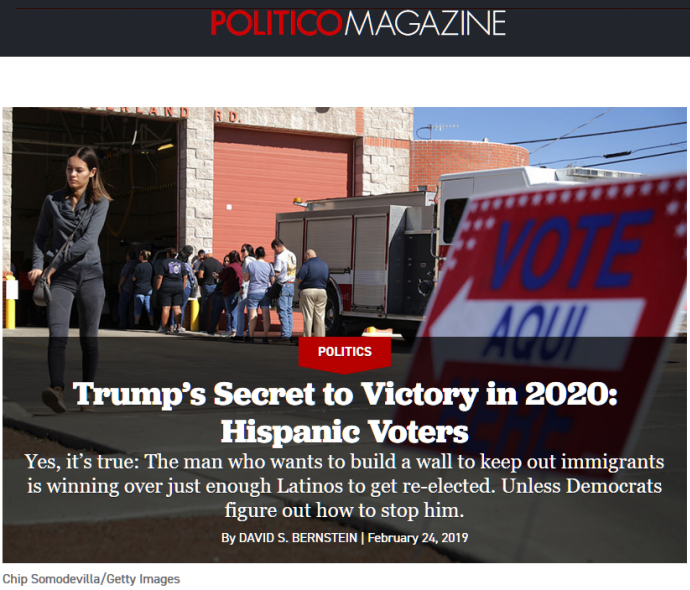 ...and why Democrats need to worry about headlines like this... 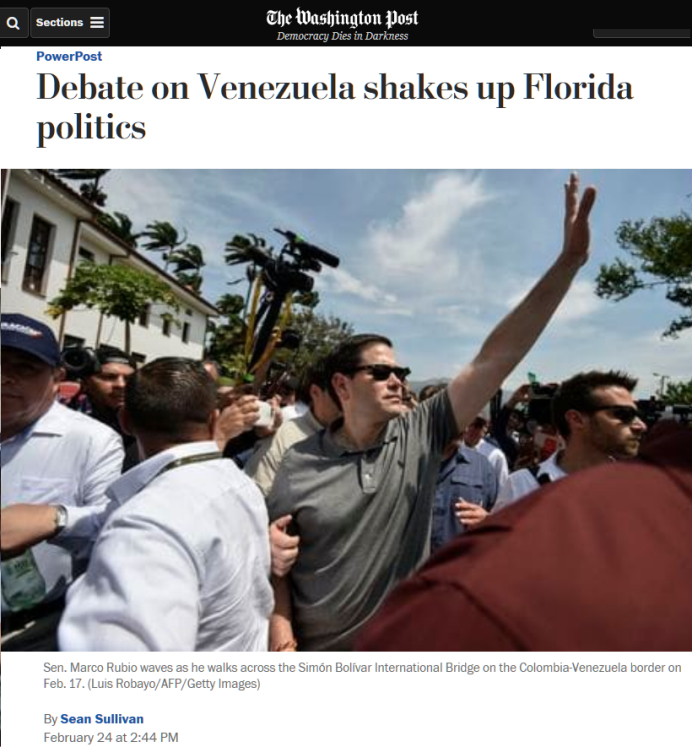 You can click on the images above to read the stories. The Politico story tells us:


When President Donald Trump tweeted, on January 20, that he had reached 50 percent approval among Hispanic-Americans, most fair-minded observers reacted with skepticism, if not outright disbelief. Trump was...the same man who has made building a wall to shut out migrants the focal point of his presidency. Yet here he was, crowing characteristic bravado: “Wow, just heard that my poll numbers with Hispanics has gone up 19%, to 50%. That is because they know the Border issue better than anyone, and they want Security, which can only be gotten with a Wall.”
One month later, however, and Trump is making an aggressive play for Hispanic-American votes in Florida and beyond. Meanwhile, polls suggest [the Marist poll] might have been onto something—and that Democrats should be worried that Hispanic voters could help reelect Trump and keep the Senate in Republican control. If so, it would be a cosmic twist of fate: A party that has staked its future on a belief that America’s demographic picture is changing decidedly in its favor could find itself losing to a man whose politics of fear should be driving precisely those voters into the Democrats’ waiting arms.
Many expected Hispanics to vote overwhelmingly against Trump in 2016. A Latino Decisions poll conducted just before the 2016 presidential election found Trump had the support of just 18 percent of Hispanics. But the actual figure was 28 percent, which—given Trump’s incendiary rhetoric about immigrants—some analysts and pundits refused to believe from exit polls until further studies confirmed it. That was just as good as Mitt Romney, as the 2012 Republican nominee, did with Hispanics—and it was enough to help Trump squeak an Electoral College victory.
Now, here’s the brutal truth for Democrats: If Hispanic Americans are in fact showing surging approval of Trump, he could be on his way to matching or exceeding the 40 percent won by George W. Bush in his 2004. If Trump does 12 percentage points better than his 2016 numbers with the growing Hispanic vote, it pretty much takes Florida, Arizona, Georgia and North Carolina off the table for Democrats, who would need to sweep Michigan, Pennsylvania and Wisconsin to reach the 270 electoral college votes needed to win the White House. At the same time, that 12-point shift would give Trump a clear shot at winning Colorado and Nevada, states where Hispanic voters make up well over 10 percent of the electorate and where Clinton won by 5 percentage points or less in 2016.
And if the Democratic path to the presidency looks hard without overwhelming Hispanic support, control of the Senate looks almost impossible. Any realistic scenario to gaining the necessary three seats—four if Trump retains the presidency—requires Democrats to defeat incumbents Cory Gardner in Colorado and Martha McSally in Arizona. Both states have higher than average Hispanic electorates. Gardner won his seat in 2014 by evenly splitting the Hispanic vote. McSally, who was just appointed to succeed John McCain, narrowly lost her 2018 race to Kyrsten Sinema by winning 30 percent of the Hispanic vote in her state. Any improvement among Hispanics for Republicans—or even just a lack of enthusiasm for turning out to vote against Trump—could easily return Gardner and McSally to the Senate and leave Democrats in the minority.

The problem is there is a background difference between being... 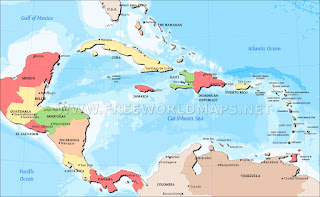 Click on image to see a larger version!
...a difference not uncomparable to the difference between Americans having Polish and Italian backgrounds.

The Republic of Cuba is one of world's few Marxist–Leninist socialist states and Florida is home to thousands who fled Cuba because of that, arriving in the United States as immigrants.

And from the Washington Post article above, thoughtful Democrats outside of Florida could learn:


Florida Republicans hope the outspoken push by President Trump and Sen. Marco Rubio (R-Fla.) to oust Venezuelan President Nicolás Maduro will help the GOP strengthen its bonds with the state’s Hispanic voters, paying dividends in the 2020 election and beyond.
Opposition to the socialist regime in Caracas, which is closely aligned with communist Cuba, has been a shared cause of the state’s large and traditionally pro-Republican Cuban American and Venezuelan immigrant communities.
“It’s a huge moment for the Republican Party,” said Brian Ballard, a Florida lobbyist and GOP donor with ties to Trump and Rubio. “It will be like Donald Trump can [be] to Venezuelan American voters the way Ronald Reagan was to Cuban American voters.”
Adding to the tension is growing concern among Democrats that Trump and his allies, seizing on the party’s leftward shift, will move to portray his potential 2020 challengers as socialists and point to Venezuela’s collapse as a symbol of what’s wrong with the views they espouse.
Florida Democrats are disavowing the recent refusal by presidential candidate Sen. Bernie Sanders (I-Vt.), a self-described democratic socialist, to label Maduro a dictator and call for him to go, though Sanders has criticized him.
“They are clearly ignorant comments, and someone who’s running for president of the United States should be better briefed and knowledgeable about this crisis in Venezuela and how it impacts the Florida political landscape,” said Christian Ulvert, a Florida Democratic strategist who is of Nicaraguan descent and whose husband’s family has roots in Venezuela.

That Ocasio-Cortez is a member of the Democratic Socialists of America and is becoming the face of the Democratic Party threatens the ability of the 2020 Democratic Presidential candidate to carry Florida, regardless of who it will be. Fleeing Fidel Castro's Cuba was a deeply emotional act carrying with it a fear of socialists that will be passed on to at least two generations voters.

And Donald Trump's campaign understands that, even if too many very ignorant Democrats don't.

Keep in mind that all the Latino voters, who are generally referred to as Hispanic voters, cannot be categorized as a single group. Here is what the Pew Research Center said about the 2018 Election: 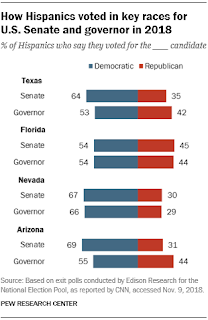 The risk here is that when you see the Hispanic vote for Republican candidates greater than 30%, the Democratic Party has a problem for 2020. And, again, Donald Trump's campaign understands that, even if too many very ignorant Democrats don't.

At a minimum, the National Democratic Party ought to be unsettled by this headline because California Democrats are not surprised (click on image to read the story): 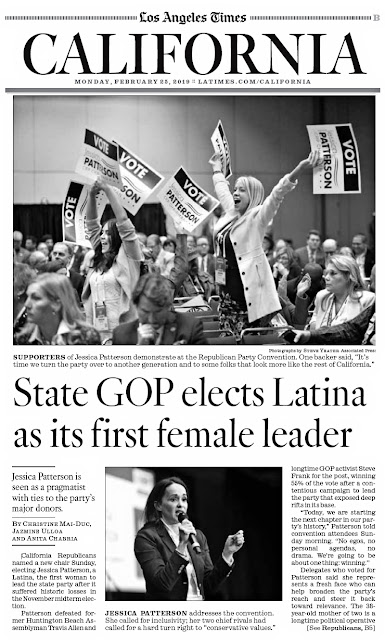 Speaker of the House Nancy Pelosi and U.S. Senator Dianne Feinstein are both Californians who have worked diligently for decades to establish a Democratic supermajority in their state. Both have already indicated that they understand 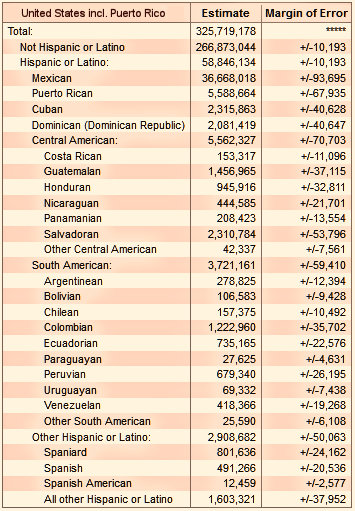 As noted at the beginning here, we all have to understand a word as it is generally used in the United States related to politics and elections - Latino. It's pretty simple. It means "of or relating to people of Latin-American descent."

Of course, when I say it's simple, it really isn't. As Cuba and Venezuela show, "socialism" is an ideological term full of traps. And if the Democrats outside California and the Southwest don't figure that out before the end of this calendar year, there is a chance they will assure the reelection of Trump and not gain control of the Senate for a decade simply by becoming unappealing to the Hispanic vote in key states.

In the meantime, here in California the very-small Republican Party elected a Latina its first female leader, so Governor Gavin Newsom and other Progressive Democrats are going to have to factor that in to avoid during the next decade the loss of the Democratic supermajority.
Posted by Michael O'Faolain - at 1:47 PM