They literally think differently from us. And their patience with Trump's economics just ran out. 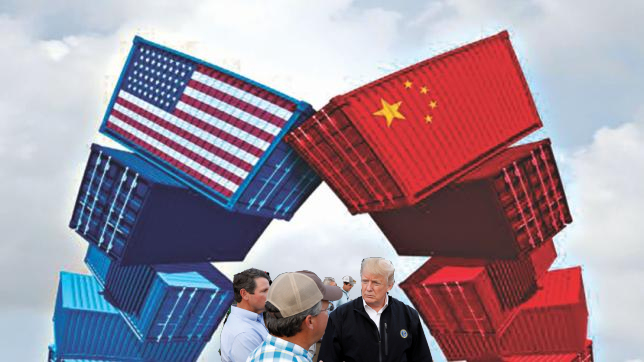 A 21st Century study indicates that a group of humans view the world differently. The study tracked eye movements and learned that, when shown photographs, individuals in Group A paid more attention to the object in the foreground of a scene, while individuals in Group B spent more time studying the background and taking in the whole scene.

Interestingly, another study used brain imaging to see which parts of the brain were active while people did simple math problems. Individuals in both Group A and Group B used their inferior parietal cortex, which is involved in quantity representation and reading. But those in Group A showed activity in a language processing area of the brain while Group B used a brain region involved in the processing of visual information.

Finally, earlier 21st Century studies have established that when speaking and reading their native languages in both Group A and Group B the left side (hemisphere) of the brain is active, but Group B also use the right side of the brain.

If you didn't already know it, the Chinese think differently from us. And by that, I don't mean they have different opinions about the acting in "Spiderman: Far from Home", I mean the way their brains process interactions with the world around them and the people in their lives is different because of 20,000 years of continuous linguistic and cultural evolution.

In previous posts here, the importance of 4,000+ years of China developing a culture and language quite apart for European influence has been mention. It was mentioned in the context of Americans working to gain an understanding of a culture that, like all third-world cultures, has had no significant good experience with European-based cultures unless you think being invaded in the 19th Century is a good experience.

There is absolute no possibility that Donald Trump or most of the American farmers and other rural Americans understand this. And now their ignorance is about to bring the world crashing down on them.

For instance, that 10% tariff Trump is going to levy beginning in September will impact such companies as Apple. That would mean that a widget bought by Apple for $1.00 would cost $1.10,  10% more because of the tax paid to Trump. By adjusting their value of their currency downward relative to the dollar, that widget will cost Apple 91¢ which after Trump's tax of 9¢, would again cost Apple $1.00. (Actually, they didn't drop the yuans-to-dollar ratio that much, but rather will just let it slowly adjust as Trump keeps up his bellicosity.)

On the other hand, despite what appears to be an announced temporary halt in U.S. agricultural products, China will permanently quit buying from those U.S. farmers - end of subject, it's not negotiable. They will have to contract to buy those products elsewhere from a reliable source to feed their people.

Sadly, the behavior of the United States government in the past two years has reinforced in China a choice to fully embrace its long established cultural traditions while dismissing the culture of constant conflict, violence, and daily change created by the extremely short 400 years of American history.

What has happened is that Americans think there is a trade war going on between China and the U.S. Plus we think there are some "tensions" over Taiwan and the South China Sea.  But those things are the outward manifestations, symptoms of what has happened as far as the Chinese are concerned based on a big picture look at America's priorities.

China has rejected us. In a symbolic sense it could be said it has been decided that 1.4 billion Chinese people will just have to get along with Hauwei phones, which unfortunately for us are the best value in the world's smart phone market.

Oh, and a footnote. China has already indicated counter-measures to U.S. Defense Secretary Mark Esper's plan to locate ground-launched, intermediate-range missiles in Asia within a few monts. The irony is that from China's standpoint the U.S. threat is comparable to the Cuban missile crisis.
Posted by Michael O'Faolain - at 4:00 PM

Email ThisBlogThis!Share to TwitterShare to FacebookShare to Pinterest
Labels: China, The Phone War