No focus on Science, Technology, Engineering, and Math (STEM) for a dynamic and evolving workforce is why Silicon Valley tech workers are immigrants

In September 2018, nearly a year ago, an Inc. Magazine article China Is Leading in Artificial Intelligence--and American Businesses Should Take Note told us:


A.I. isn't just another tech trend. Within a decade, all technologies--from everyday business to genomic editing--will in some way touch A.I. Today, China is poised to become its undisputed global leader, and that will affect every business.
Under President Xi Jinping, China has made tremendous strides in many fields, but especially in A.I. Businesses and government have collaborated on a sweeping plan to make China the world's primary A.I. innovation center by 2030, and it's already making serious progress toward that goal...
It's true that China has failed at times to deliver on similarly bold investments. (The development of China's high-speed-train network had a history of death and catastrophe.) That may be why we haven't taken Chinese A.I. startups, researchers, and government initiatives as seriously as we should. While we shouldn't expect--or want--the U.S. government to model China's example and dictate A.I.'s future, public and private sectors should coordinate on educating leaders about A.I. and writing policy that helps A.I. businesses thrive.

But China has had a problem as noted by the MIT Technology Review in China’s path to AI domination has a problem: loss of talent to the US. Fortunately for China, the American white nationalists that control the Trump Administration in 2018 began systematically to solve that problem for China as explained in (listed in chronological order):
The last article listed above from Bloomberg, U.S. Targeting of Chinese Scientists Fuels a Brain Drain, describes the impact:


It was a big opportunity for a small research university. In 2013, Xin Zhao, a prize-winning Ph.D. from the College of William & Mary, landed venture funding to commercialize some of the school’s patented nanotechnology. Zhao’s startup rented space nearby, hired local graduates and agreed to fund $1 million of new research at the Williamsburg, Virginia, campus.
“It was what everyone wants to see—a success story of a university spinout,” says Jason McDevitt, the school’s director of technology transfer.
Six years later, Yick Xin Technology Development Ltd. is up and running, but not in Virginia. The company’s R&D and new patent registrations—the lifeblood of any technology startup—have moved to China. The planned William & Mary spinout left the U.S. after federal agents hounded its founder, Zhao, for two years, and prosecutors accused him of trying to smuggle a robotic arm from Florida to a university in China that U.S. officials had linked to the nation’s top nuclear weapons lab. The charges were dismissed in December 2017—but Zhao, shaken by the ordeal, gave up his U.S. research operations.
The 44-year-old applied physicist’s struggle to clear his name, extricate himself from a persistent undercover sting and overcome a 2016 arrest shows how America’s heightening cold war with China presents risks for ethnic Chinese scientists working in the U.S. He’s among a growing number who are leaving behind their families and taking their skills and business opportunities to—where else?—China.

The Chinese situation provides a background which makes it clear that having tech research and development personnel is critical to the future success of the country. But the Trump Administration problem isn't limited to Chinese immigrants nor even mostly related to university research. It is threatening America's continuing tech leadership as indicated by the headlines below...
...and as explained in the first article in the list:


Last year, researchers at the National Foundation for American Policy, a nonpartisan think tank, studied the 87 privately held American start-ups that were then valued at $1 billion or more. They discovered something amazing: More than half of them were founded by one or more people from outside the United States. And 71 percent of them employed immigrants in crucial executive roles.
Collectively, these companies, which include householdish names like Uber, Tesla and Palantir, had created thousands of jobs and added billions of dollars to the American economy. Their founders came from all over the world — India, Britain, Canada, Israel and China, among lots and lots of other points around the globe.
In 2011, an immigration reform group, the Partnership for a New American Economy, found that more than 40 percent of companies in the Fortune 500 were founded by immigrants or the children of immigrants. For the newest members of the Fortune 500, many of them technology companies, the rate of immigrant founders was even higher, the organization said.
That should come as no surprise if you are familiar with the origins of the most iconic companies of the last few decades. One of Google’s founders is an immigrant from Russia, and its current chief executive is an immigrant from India. Microsoft’s chief executive is also from India. EBay and Yahoo were started by immigrants. Facebook’s largest subsidiaries, Instagram and WhatsApp, were both co-founded by immigrants. Apple was started by a child of immigrants.

The challenge for Trump's people would be to list the red state rednecks with similar accomplishments in 21st Century technology. There must be some. Right?

Trump's people are taking advantage of a large population of Rust Belt white folks who essentially experienced little or no "STEM education" meaning an inadequate background in Science, Technology, Engineering, and Math. As explained in a U.S. Department of Education December 2018 Report:


In an ever-changing, increasingly complex world, it's more important than ever that our nation's youth are prepared to bring knowledge and skills to solve problems, make sense of information, and know how to gather and evaluate evidence to make decisions. These are the kinds of skills that students develop in science, technology, engineering and math—disciplines collectively known as STEM. If we want a nation where our future leaders, neighbors, and workers have the ability to understand and solve some of the complex challenges of today and tomorrow, and to meet the demands of the dynamic and evolving workforce, building students' skills, content knowledge, and fluency in STEM fields is essential. We must also make sure that, no matter where children live, they have access to quality learning environments. A child's zip code should not determine their STEM fluency.

As a The Atlantic article on getting more kids to take AP calculus or AP statistics explains:


The Harvard study found that it's extremely rare for students who don't take their first algebra course in middle school to go on to take Advanced Placement (AP) calculus. The College Board's AP program includes two calculus courses: AB and BC, the latter covering more material.
The traditional progression to AP calculus begins with algebra and continues with one year of geometry, a second year of algebra, and a year of pre-calculus. HCPSS students typically take AB before they take BC. So if you assume a student takes BC her senior year, and count backward, you'll find that she should really take algebra in seventh grade.
Sure enough, the Harvard study found that students who take algebra in seventh grade are much more likely to take BC calculus. The study also found that students who take algebra in middle school were likely to be white, Asian, and affluent, and that standardized test scores in middle school tracked the same disparities that emerged in third grade.

This reflects what we already know - the white and Asian affluent will, on average, become more affluent. And those affluent kids coming out of college in the near future are not going to replace the STEM educated immigrants working for Intel or Microsoft on AI systems, immigrant workers that will be lost to Trump politics, immigrants needed to compete with China on the future of AI.

It seems not only is Trump's America in denial about the future of the nation in terms of Climate Change, it seem to be in denial about needing immigrants to compete economically. 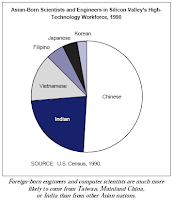 What is frustrating about this is that the Public Policy Institute of California in June 1999 Research Brief titled Silicon Valley’s Skilled Immigrants: Generating Jobs and Wealth for California explained all the reality that has continued for 20 years, offering the chart to the right. But we forget or are in denial.

Or maybe we fail to understand just how much creativity is involved in the design of a device system because it involves STEM rather than music and dance. It is hard to understand because in the U.S. broad cultural recognition rarely comes from having STEM talents.

It is simply true that being a reality show host, no matter how weak your STEM skills, will get you enough recognition to become President.

Perhaps it is time to start reminding our fellow Americans that both their own near-future and their grandchildren's long-term well-being will dependson today's adults becoming better informed. But Donald Trump is President, so....
Posted by Michael O'Faolain - at 5:13 PM