Nationwide right-wing attacks on Gavin Newsom have begun as the new policy face of the Progressive Pacific takes necessary leadership and career risks. 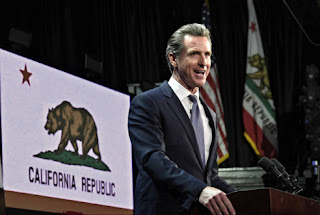 Progressive California Governor Gavin Newsom
will become the "lightning-rod stand-in" used
by the right-wing to attack Democrats though
he's a non-candidate in 2020 national elections.
It may or may not come as a surprise that conservatives have labeled California as "America's nation-state."

It appears to have been coined in May 2011 by Bill Whalen, the Virginia Hobbs Carpenter Fellow in Journalism at the Hoover Institution (one of the California organizations within the Neoliberal Atlas Network along with the Ayn Rand Institute and the Pacific Research Institute).

Because Whalen systematically has begun to offer "analysis" on California Governor Gavin Newsom, analysis that appears in general media as well as "conservative" media, it is important to consider his approach before discussing his writings.

By this writer's standards, Whalen is not actually a journalist, but rather a columnist though in 21st Century America apparently discussing the news (columnist) has been successfully conflated with reporting the news (journalist). Not that Whalen's copious writing is full of misinformation, but rather it is structured to further the Neoliberal cause nationally. Whalen served as:
And so January 7, 2019 Gavin Newsom became Governor of California. Four days later an opinion piece by Whalen Gov. Newsom could run for president. Is it a question of if or when? appeared in The Sacramento Bee and on the Hoover Institute website. It was the second of what appears to be pieces directed at creating an information base on Newsom as Governor to use to scare folks away from the Democrats nationally. The first was published just after the 2018 Primary in which Newsom handily came in first. Whalen wrote:


Brown was described as the embodiment of the “new politics of austerity,” while his father and former governor represented “the politics of abundance.”
As for Newsom, no Democrat who entered the general election as a frontrunner has been this overtly progressive, proposing to expand government programs for health care, housing and more.
But does he represent a shift in where the Democratic Party stands, and would a Newsom governorship set him apart from the rest of a Democratic chorus that wants single-payer health care implemented and Trump impeached?

Recently in Newsom's Unwelcome Stirring of Democrats' 2020 Pot Whalen focuses on Newsom's March 13 executive order creating a formal moratorium on capital punishment. The piece appears in Real Clear Politics, a "conservative"website created by John McIntyre and Tom Bevan. In an interview McIntyre described the philosophy behind the Web site as based on "freedom" and "common-sense values". Said Bevan, "We think debate on the issues is a very important thing. We post a variety of opinions". He further stated, "we have a frustration all conservatives have", which is "the bias in media against conservatives, religious conservatives, [and] Christian conservatives". 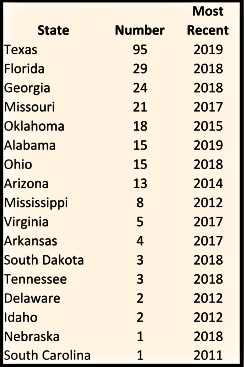 Including California, Governors in 4 states, the Attorney General in 1 state, and other officials in 1 state have established moratoriums. Courts in 2 states have suspended all executions. And since 1961 the U.S. military and 2003 federal civilian authorities, along with 3 other states, have de facto moratoriums.

But, since 2010 executions have occurred in the states as indicated in the table to the right. And "to the right" is an appropriate description for the states on the list other than Deleware and Virginia which are the only ones that Donald Trump did not win in 2016. 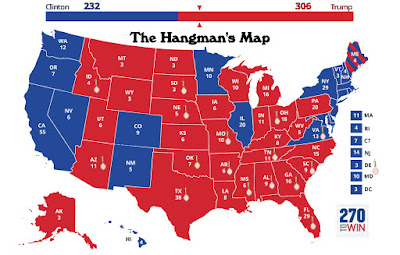 Here's another way to view it if you live in the Progressive Pacific world. Each state that has conducted one or more executions since 2010 has a hangman's noose image within its boundaries. Let's call it "hangman's country."

This should give a pretty good feel for why we can expect a political attack on Newsom from those who want Trump reelected. The death penalty issue will be used to imply that Democrats are soft on crime, even on murder. Attacks from "hangman's country" on Newsom will be "by implication" attacks on Democrats nationally.

Newsom simply represents Californians 62% of whom favor life imprisonment over the death penalty.

But Newsom isn't running for President and he has serious matters to deal with. Quite simply he has to lead the California Republic which if it were an independent country like New Zealand would rank as follows:

Most importantly now that the "socialists" in the East have killed the "Green New Deal" label, what we call here The California Green & Gold Deal will have to be defined and implemented by Newsom working with the California Legislature. (As explained in an earlier post the "Green New Deal" concept first was being explored publicly at the 2003 Bioneers environmental conference in Marin County, California, not in New York City or Boston, and slowly expanded upon in the decades thereafter.)

As explained in detail in a previous post, two out of the three U.S. Presidents of the 21st Century lost the popular vote but won in the Electoral College and, though California has 12% of the population, it has only 2% of the vote in the U.S. Senate.

Quite literally, legislation passed in the House can be killed or passed by a vote of 51 Senators who represent the least populous 26 states containing only 17.6% of the U.S. population and who were put into office by less than 8% of eligible American voters.

In that situation it does not matter that the remaining 49 Senators, representing 82.4% of the U.S. population and who were put into office by more than 92% of eligible American voters, disagree.

No wonder Wikipedia notes in its entry about "Oligarchy":


The modern United States of America has also been described as an oligarchy, with its Republican Party representing a minority of the population but securing control of the Senate, the Presidency, and the Supreme Court, while the Democratic Party has control of the House. Migration to cities will likely see the Republican Party's hold over the Senate strengthen in subsequent elections, despite an expected demographic shift to a majority-minority population by 2045. And lifetime appointments of Supreme Court justices make that body's conservative majority a likelihood for at least eight years.

Californians find themselves in a country in which an oligarchy of 51 people representing the will of 8% of eligible voters control U.S. government policy. Further, as few as 34 of those 51 people can prevent any change in the design of the U.S. government (or 17 of the 50 states).

The example of Brexit serves to discourage a serious attempt to request that California be allowed to withdraw from the Union. At this time we can only hope that the officials in California's democracy under the leadership of Newsom can protect us from that oligarchy.
Posted by Michael O'Faolain - at 11:43 AM