So many Democrats! What's a true Progressive Platform and who among them is running on one?

Those of us in the Progressive Pacific are looking for a true Progressive among the Democratic candidates for President. Perhaps it could be U.S. Senator Amy Klobuchar (D-Minn.).

Most certainly the Progressive Pacific focus is on U.S. Senator Kamala Harris (D-CA) and Washington Governor Jay Inslee. But a good Progressive candidate understands the economic policy issue most appropriate for the federal government to handle - you know, the issue related to the Commerce Clause, the antitrust issue. It is the "bread and butter" issue for traditional Progressives. As explained in our Progressive Pacific Message website: 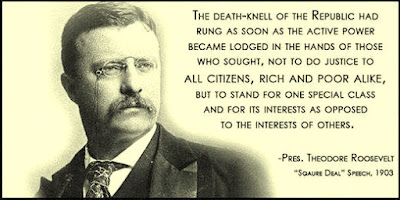 In 21st Century America Progressives find themselves lost in a sea of words which opponents use to confuse, hide, or sublimate their message.

Progressives know that at the beginning of the 20th Century their message was accurately expressed by Teddy Roosevelt seeking to counter the impact of the Industrial Age on the American economy.

Progressives do not share a "liberal" or "democratic socialist" focus on using taxpayer money to design and  create a "better society." Progressives oppose the Neoliberal ideology of the state Republican Party organizations and of the Third Way of the National Democratic Party which embraces that Neoliberal corporatist economic ideology.

Klobuchar has been attempting to get the issue into the mainstream of the 21st Century American political conversation. As explained in a New York Times piece:


Amy Klobuchar, the Minnesota senator and presidential candidate, was talking to me yesterday about her efforts to get the media to pay more attention to antitrust issues.
“I can’t tell you how many times I’ve tried to do interviews on TV,” she said, laughing. “Last night, I got on ‘Hardball,’ finally,” she continued. It was a segment timed to a Senate hearing held this week on antitrust issues. Even so, she said, “They would not ask it just as an antitrust question even though the hearing was today. They asked it as pharma” — that is, about high drug prices.
Antitrust, Klobuchar said, “just feels weird” to much of the media. It feels technical and wonky.
But here’s the thing: Antitrust issues — mergers, corporate concentration and the like — have huge effects on Americans’ lives. And those effects are neither technical nor wonky.
Companies have grown so large and powerful that they have outsize power over workers, consumers and politics. Corporate consolidation is indeed driving drug prices higher. It’s creating data-privacy issues. It’s helping to hold down workers’ wages (as this Obama administration report explained). In one area after another, Klobuchar said, “People are starting to figure out that they don’t have a lot of control.”

Of course, even Donald Trump isn't happy about media company mergers - the companies that control the news. But that's because he isn't respected by those companies.

Klobuchar has a broader view as explained in the Washington Post article Sen. Amy Klobuchar: ‘We have a major monopoly problem’:


If there’s a common theme uniting Democratic candidates for president, it’s the argument that the United States faces a rising inequality problem, one exacerbated by the concentration of power and money in the hands of a small elite.
That line of thinking has been the source of high-profile policy ideas such as a tax on wealth or Medicare-for-all. But it’s also given momentum to a wider debate about corporate consolidation and whether the rules designed to keep the free market fair are working for everyday Americans.
Sen. Amy Klobuchar (D-Minn.), a candidate for the Democratic presidential nomination, is among those calling for tougher competition rules. In an interview Tuesday, Klobuchar, the top Democrat on the Senate Judiciary antitrust subcommittee, argued that public anger over high prescription drug prices, privacy violations by tech companies and a string of megamergers shows how U.S. laws need to change.
"We have a major monopoly problem. We’ve seen a 50 percent increase in mergers in the last five years, and we’ve seen now a number of trillion-dollar companies. It doesn’t mean every big company is bad; it just means we’re seeing more and more consolidation of power. The problem is, our antitrust laws haven’t attacked changes in the kinds of businesses we have.
"First is tech. We haven’t been able to move privacy legislation for years. The second area is pharma, where literally they have three lobbyists for every member of Congress. You’re starting to see common drugs like insulin that have been around for a century, where you’ve seen prices triple or quadruple. The answer here is to pass new legislation that — when it comes to things like pharma — address 'pay for delay.'
"And then also do something about the antitrust laws. I have two bills: One is to increase the fees on companies that are in megamergers, so that we can better fund the Federal Trade Commission and the Justice Department. The second piece of it is to do something about the [legal] standard.
"I would like to see investigations which are going on right now at the FTC of the different aspects of these monopoly companies. That’s what I’m pushing for right now, and then you look at the facts and you make a decision then. But I would love to get more competition in. And it’s going to be very hard to do that before we get major investigations and we start changing the law."

Klobuchar probably will face significant difficulties because of her focus on antitrust. Major corporations will fund opposition. And the idea of a "bread and butter" issue faces an uphill battle among those on the left who detest folks who eat bread and butter. They want a tax on wealth which has never resolved the consolidation-of-wealth problem. They think Medicare-for-All will somehow make the United States more egalitarian. That's just silly.

Unfortunately, Klobuchar already has taken a hit for a workplace anger management problem which could cost her the snowflake vote.

Here in the Progressive Pacific support for Harris and Inslee, both of whom have extensive experience in executive roles in state government, comes rather easily.


...just 608 days until the Presidential Election  and only 334 days to the Iowa Caucus. As noted previously, this is plenty of time to make serious misstatements and misjudge what will be the major problem facing the nation within the last six months (180 days) before the election.
Posted by Michael O'Faolain - at 2:34 PM