War with China? Hardly! Instead, you need to know about the Belt and Road Initiative gains in Europe

For reasons unclear to this writer, the President of The Deplorables is engaged in a trade war with both Europe and China. One political cartoonist offered this explanation about the Trump Administration view of Europe: 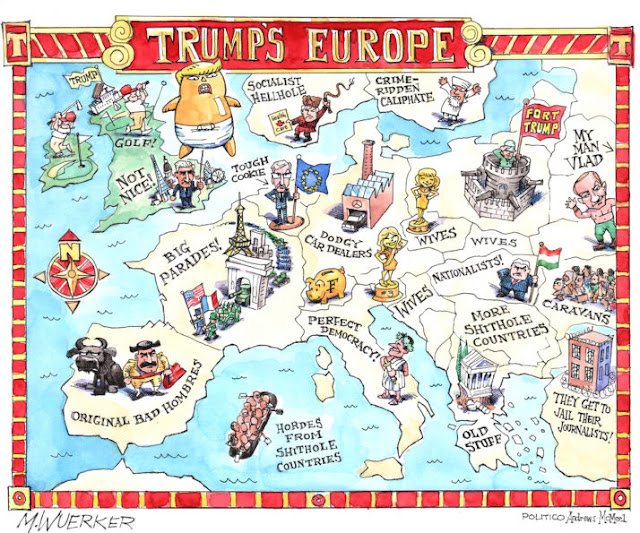 Trump has a more respectful view of China, but he is advocating a war against both. In fact he has launched an American trade war against both. And members of his Administration have threatened China with military action.

On occasion one must puzzle over the aggressive approach taken towards China by Neocons in the Trump Administration. As the world's preeminent nuclear power, the United States technically could win a war against China. But Americans would still lose, even if China never launched one nuclear weapon in response.

At some point, even those who pretend there is no world climate have to acknowledge the wind that would bury everyone east of China in radioactivity - oh, and that includes the U.S. It is as if Trump has gotten his Deplorables to now chant "Death to America."

And let's not get confused about a non-nuclear war. China has 1.4 billion patriotic  people, we have 0.3 billion. Does anyone seriously think we could win a "land war" against 1.4 billion people who live in a country that at it's closest is about 6,000 miles away across an ocean?

The American establishment would have us believe that the European Union is obviously much closer to the U.S. than China. Really? Consider these two images: 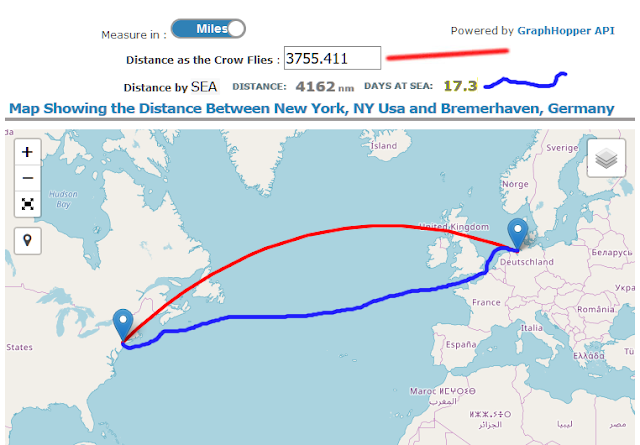 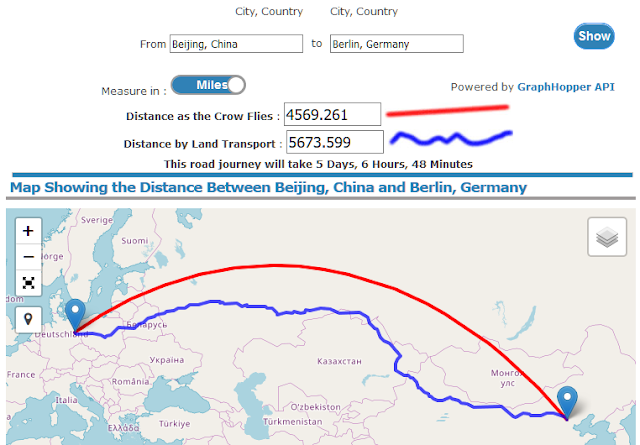 Between Germany and the near Atlantic Coast of the United States, manufacturers and wholesalers can fly a load of raw materials or goods in a day, or ship a load by ship in 17 days.

Between Germany and the far Pacific Coast of China you can fly a load of raw materials or goods in a day, or ship a load by train in 6 days.

Americans don't talk about the geography that way, that Eurasia is a single continent - one big stretch of land, attached to Africa.

On the other hand, North America, Central America, and South America are one big stretch of land not attached to Eurasia or Africa. Movement between Eurasia/Africa and the Americas can be accomplished only by aircraft or ship.

Of course we can walk or drive the length of the Americas. Yet we consistently alienate our fellow Americans who are doing so. It is almost if some detest and many deny the fact that the U.S. is in the Americas and not Europe.

In the 21st Century the physical isolation of the Americas, particularly North America, will have consequences.

Then there is the idea that we're in a competition with China to remain the world's economic leader. China and the U.S. already share the status of having the world's largest economy. There are two accepted methods used to compare the size of economies.

The first method uses the traditional nominal gross domestic product (GDP),  the market value of all final goods and services from a nation in a given year estimated by financial and statistical institutions, which are calculated at market or government official exchange rates. The United States has the largest such economy. You know that because every American is wealthy - we must be as we have the largest economy.

The second uses a gross domestic product based on purchasing power parity, created using an international dollar, a standardized unit used by economists, which takes into account the relative cost of local goods, services and inflation rates of the country, rather than using international market exchange rates which may distort the real differences in per capita income. As experienced in the lives of ordinary people everywhere, China has the largest economy in the world.

Apparently this makes some American competitive-Type-A personalities nervous. It shouldn't. Let's just say for argument's sake that that the U.S. and China were to have the same size economy - GDP measured in money. China has four times the population as the United States. So in our hypothetical situation of same size economies, China's economy on a per-capita basis is one-fourth that of the U.S. China has a long ways to go to be competitive with the United States, unless of course we make our own economy collapse...which is possible.

Still, by the end of the 21st Century not only will Climate Change have altered the world significantly, the physical isolation of the Americas will continue to leave the United States dependent on commercial aircraft and ships at the very moment crossing oceans is becoming a different experience, as ports and airports are struggling because of sea level rise and unpredictable storm conditions. Our military has already started to adapt to those facts. But American civilians and their economy, not so much, unlike the Chinese.

If you follow the news ...no, not "that news" that reports the daily antics of Trump which are really unimportant relative to future of the 21st Century world....  Anyway, if you follow the real news of the world you may be aware of Italy’s decision to join China’s $1 trillion Belt and Road Initiative (BRI). You actually may have seen the story in "that news" because the Trump folks complained.

What "that news" most definitely did not tell you about was the November 2017 launch of the Kouvola-Xi’an rail route. If you had read some European newspapers or The China Daily that November you would have seen stories based on this news release and associated map: 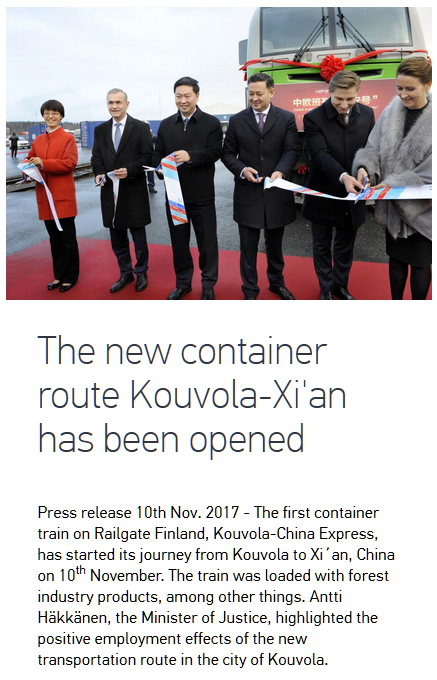 China launched a first-of-its-kind cargo train connecting it all the way to Finland — the Kouvola-Xi’an Route is part of the BRI (which again is the Belt and Road Initiative).

China has so far launched similar routes to 42 cities in 14 European countries, with most of them passing through Kazakhstan, Russia, Belarus and Poland to destinations in western and southern Europe. Now they are connected to northern Europe.

Although rail freight still accounts for a fraction of the total China-Europe trade, it is growing fast thanks to subsidies offered by China under its Belt and Road initiative. Last year, a total of 350,000 containers were transported between China and Europe on the main route through Poland and Belarus and that number is expected increase to one million by 2020.

With plans up to 2030 and beyond, the Finnish city has reserved a 300-hectare area for distribution centers storing products made in China, final-assembly factories, logistics companies and other related businesses. The expanded logistics area will also enable to load cargo on trains longer than 1,000 metres.

And now a 60-mile undersea tunnel — it would be the world’s longest undersea rail crossing — is planned with funding from China which would dramatically shorten travel time between Finland and Estonia providing connections to northern Europe.

On the date of that November 2017 news release Trump was at the annual Asia-Pacific Economic Cooperation summit in Vietnam. You would have been distracted by stories about that. Plus the Washington Post offered a story The many ways President Trump would benefit from the GOP’s tax plan.

If you ever wonder what the machines of a trade war look like, they look like this: 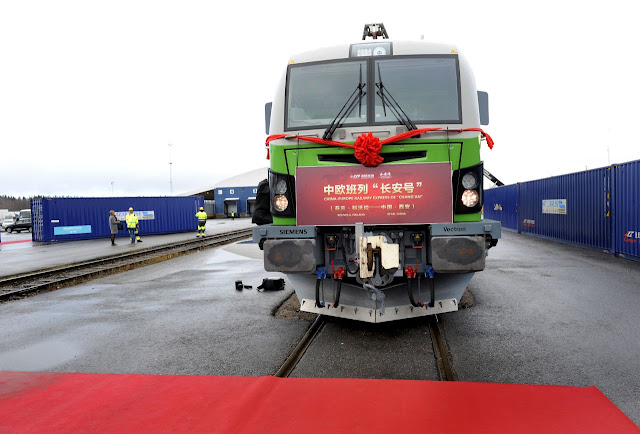 The first direct cargo train route between Finland and China was launched on November 10, 2017. Kouvola Innovation

Except, of course, China doesn't see it primarily as a trade war, just their continuing effort to make life better for a couple billion people by 2049.

European economic leaders are puzzled and put off by the accession of a Deplorable to the leadership position of the U.S. economy.  And since January 2017 when Trump took office, they are both angry and fearful. And they are responding accordingly. Here are headlines you may have missed:
It's not hard to understand why Europeans have opened the door to the expansion of China's rail system.

And it should not be hard for Americans to understand from their own history what it means for a government to facilitate the construction of thousands of miles of railroad tracks to link to the West. Well...that only applies to Americans who understand their own history, particularly those that building railroads to the West began as a Union economic Civil war initiative to block the Confederacy.

That pretty much currently means that The Deplorables of the southern states wouldn't have a clue.

But along with "climate denial" this international trade failure could condemn future American generations to a life of real struggle, not the peculiar challenge of a generation that can afford opioids.

As explained in the last article listed above, Trump is threatening to make roquefort and stilton cheese, wine and aircraft parts less affordable to Americans. Once that cheese and wine is regularly loaded on a train to China, the trade war with Eurasia will have been lost for decades to come.

For more about this subject click this link Belt and Road Initiative.
Posted by Michael O'Faolain - at 10:22 PM