Why it matters that Hillary is a woman: American's failed to pass the Equal Rights Amendment

Has it been so long ago that we don't remember, or more particularly white women over 40 don't remember, that women were formally denied a guarantee of equal rights by legislators in 15 states, that in 1972 Congress (yes there was a time Congress could accomplish meaningful things) submitted to the states a proposed Equal Rights Amendment that said...


Section 1. Equality of rights under the law shall not be denied or abridged by the United States or by any State on account of sex.
Section 2. The Congress shall have the power to enforce, by appropriate legislation, the provisions of this article.
Section 3. This amendment shall take effect two years after the date of ratification.

...and that American's failed to secure approval of this simple protection of women's rights in their state legislatures. By 1980 the Republican Party had removed support for equal rights for women from its Platform while nominating Ronald Reagan.

It would be easy to say men were responsible for the failure, but click on the picture below to find out how women failed their daughters and granddaughters who now find themselves making headlines like this U.S. women take a stand over pay equity, sending ripples through soccer's world: 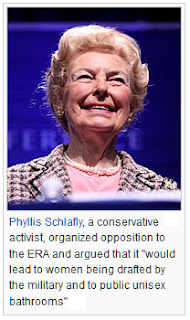 Yet her candidacy for President is considered vulnerable. Against Donald Trump?!?!?

What's disturbing is that not only is Phyllis Schlafly alive, apparently her spirit is still alive and well among white American women:

And the results can't be chalked up to right-wing Republican beliefs. Trump, once a registered Democrat, doesn't resemble an Evangelical Christian, a traditional fiscal conservative, a Libertarian, or Family Values advocate. He's a billionaire son of a New York City real estate developer which certainly makes him part of some kind of economic "Establishment." He has been married numerous times. He's expressed weird feelings about his daughter.

What about him would make two out of five white women say they would vote for him rather than a white woman who has a daughter and a granddaughter???

In the 1970's I didn't get Phyllis Schlafly. It never occurred to me that in 2016 about 43% of white women would choose to reinforce her radical anti-feminist views. A Donald Trump, yes, but....
Posted by Michael O'Faolain - at 5:06 PM