Donald Trump: just kill a 3-inch fish and thousands of family businesses so I can win California in November

On Friday Donald Trump declared war on thousands of small and medium sized family businesses depending upon the Pacific fisheries. He called these folks "a certain kind of 3-inch fish" and would do away with them to support large corporate agricultural farms. 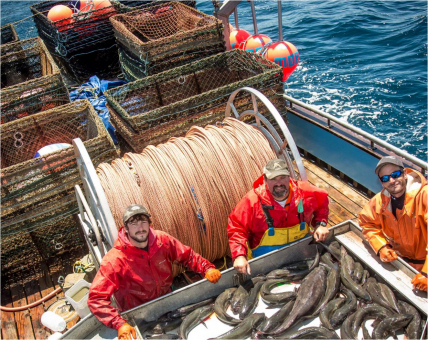 Unless these fishermen are 3-inch fish, Donald Trump is wrong again: "They are taking the water and shoving it out to sea...to protect a certain kind of three inch fish."

Basically, as President Donald Trump would put ordinary people out of work in order to protect the profits of large agricultural corporations.

About the three inch fish....

Nobody cares about the canary in a coal mine, unless it dies. And then it means that the environment in the coalmine is death to the miners and the canary is irrelevant.

And similarly, nobody but a few unusually weird environmentalists care about the Delta Smelt. Referred to by Donald Trump on Friday in Fresno, California, as “a certain kind of 3-inch fish”, Delta Smelt are an indicator species with no current direct economic utility: 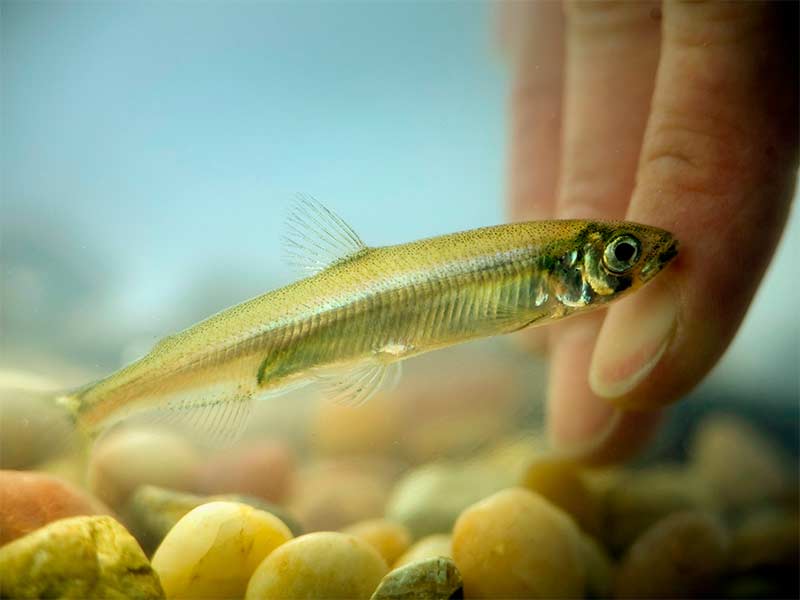 But this fish is the "canary" in the main California river systems, probably the best indicator of San Francisco Bay-Delta environmental conditions impacting upon economically important fish such as salmon and sturgeon. From an economic standpoint they are the canary for California commercial salmon fisheries. If the Smelt disappear, within less than a decade a sizable chunk of what's left of the California fishing industry will also die.

For those who care about facts, which we learned again this week is a group that doesn't include Donald Trump, it is important to know that California's fisheries are complex and dynamic systems, where people and nature are inextricably linked. In fact, even more than the agricultural economy, the seafood industry economy and related jobs depend upon protecting the environment. And there are money and jobs at issue as shown in these two tables from a 2011 study: 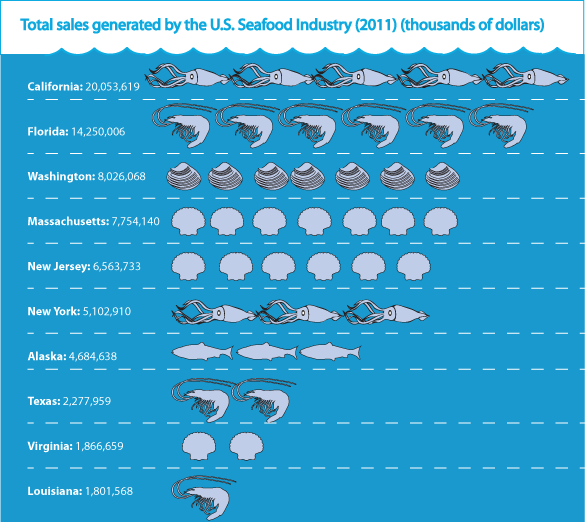 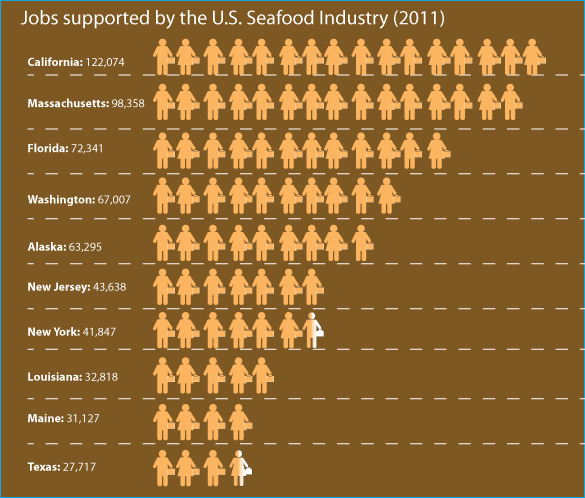 None of this is a simple subject that can be easily understood by the general public and most certainly not explained by Donald Trump. It is about competing interests within our economy, interests competing for water. Until serious farming came to California well after the Mexican-American War (California was part of Mexico, never part of the English colonies), the water was carried by the rivers into San Francisco Bay and out to the Pacific Ocean. Fishermen didn't worry.

But farmers came and diverted the water themselves. Then they had the U.S. Government and the State of California build large dams and canal systems. And because of these actions done by the American people, those in the fisheries industry related jobs were without hope...until 1976. From the Pacific Fisheries Management Council's website:


The Pacific Fishery Management Council is one of eight regional fishery management councils established by the Magnuson Fishery Conservation and Management Act of 1976.

With jurisdiction over the 317,690 square mile exclusive economic zone off Washington, Oregon and California, the Council manages fisheries for about 119 species of salmon, groundfish, coastal pelagic species (sardines, anchovies, and mackerel), and highly migratory species (tunas, sharks, and swordfish). The Council is also active in international fishery management organizations that manage fish stocks that migrate through the Council’s area of jurisdiction, including the International Pacific Halibut Commission (for Pacific halibut), the Western and Central Pacific Fisheries Commission (for albacore tuna and other highly migratory species), and the Inter-American Tropical Tuna Commission (for yellowfin tuna and other high migratory species). 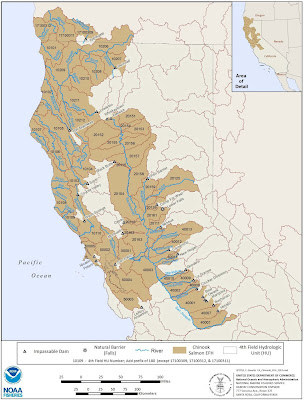 The map specifically includes the Sacramento and San Joaquin Rivers: 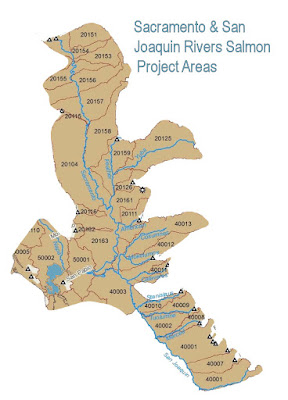 The area in tan is essential fish habitat for salmon and other species along 800+ miles of rivers. California already has lost the spring-run salmon in the San Joaquin River because of a dam.

Because the Delta Smelt is the endangered indicator species, the effects on the Smelt affect the operations of federal and state dams, plus the operations of the canal systems that move water south to the San Joaquin Valley and Southern California.

There is nothing simple about this issue. California's fishing industry finances are dwarfed by the wealth generated by corporate agriculture, agricultural money has been successful in having the newspapers and TV news frame the "water war" in terms of farmers versus environmentalists.

This is because environmentalists with money have had some success and just happen to be on the same side of the issue as the fishing industry which is made up mostly of small businessmen known as fisherman who make relatively modest incomes.

This framing of the interests involved is true even for the normally progressive Sacramento-based McClatchy newspapers which originated with The Sacramento Bee and include Central Valley newspapers The Fresno Bee, The Modesto Bee, the Merced Sun Star, and The San Luis Obispo Tribune all serving agriculturally-centered communities.

The dispute between economic interests should be framed as corporate farming executives versus a fisherman. You can learn more about the fishermen at the Pacific Coast Federation of Fishermen’s Associations website which explains:


We are the small and medium sized family businesses, conducted from vessels fishing distant grounds to small, trailerable boats working nearshore waters. We are professionals who derive our incomes largely from harvesting the sea. Large or small vessel operator, full-time or part-time, we all share a common passion for this way of life, a dedication to its future, and a commitment to a sustainable resource.

Fundamentally, the California Water Wars are between corporate-owned large agricultural interests versus the interests of the small and medium sized family businesses represented by the PCFFA.

Enter Donald Trump, the absolutely perfect "marketing pro" targeting the gullible American leading with: “If I win, believe me, we’re going to start opening up the water so that you can have your farmers survive, so that your job market will get better."


According to the LA Times:


After a private half-hour meeting with farmers, Trump said the group told him there was no drought in California, but rather a failure to preserve and wisely use the water the state has on tap.

His words were straightforward pandering to the wealthy agricultural interests, families with small farms, and the unemployed and underemployed farm workers most of whom are Mexican migrants or their descendants. As The Fresno Bee explained, even though Trump has won the Republican nomination...


But Trump came anyway, he said, because he wants to build momentum ahead of California’s June 7 primary, the national Republican convention this summer – and his coming November showdown with likely Democratic presidential nominee Hillary Clinton. The reason: He plans to compete for the Golden State, which hasn’t voted for a Republican presidential nominee since George H.W. Bush won here in 1988.

“We are going to make a strong play for California,” Trump said.

Trump then acknowledged that “maybe I can’t do it,” but said any other Republican candidate would ignore the Golden State because that’s conventional wisdom. Trump said his own wisdom is that even if competes here and loses, he’ll force the rival Democrats to spend money here to defend the state.

The article dismisses Trump as a viable Presidential candidate in California, citing the same kind of experts that dismissed Trump a year ago as a viable candidate for the Republican nomination. The problem with dismissing Trump's plans is this job growth map: 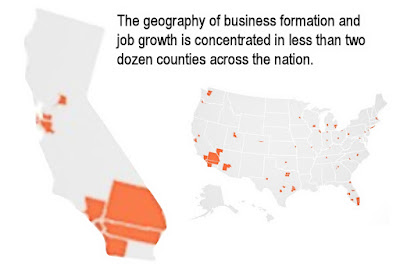 As the Economic Innovation Group's Recovery Map and Study indicates, in California only 9 counties out of 58 were among those experiencing half of the nation's job growth between 2010-2014. And don't be fooled by the two geographically large counties, San Bernardino and Riverside Counties. Only the westernmost third of those counties that are in the urbanized portion of Southern California should be colored. The remaining portions contain substantial agricultural interests.

Despite the thinking of the progressive press and liberal elites in California, Donald Trump can make California a contested state. Any idiot in the press or in the Democratic Party who thinks otherwise is among the many who have the memories of a gnat.

They have forgotten 2003 when then Democratic Governor Gray Davis was recalled because of the California electricity crisis, a crisis really not of his making though he did not respond well in the situation. California Democrats replaced Davis with showman Republican Arnold Schwarzenegger with the recall vote tallied as follows: 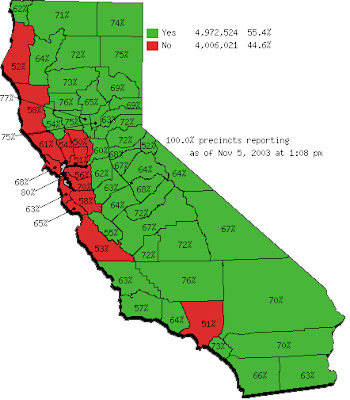 In the meantime, while Trump is advocating shifting the nation back to fossil fuels and proposing to kill the effort to save fish like salmon, the Sanders camp is helping him win in California by attacking Hillary Clinton.

If successful, Trump with the help of Sanders will get a chance to set back eight years of environmental progress made by the Obama Administration despite strong opposition from a Republican Congress.

And significantly for California, he will set back 40 years of trying to save thousands of small and medium sized family businesses depending upon the Pacific fisheries - you know, saying "your fired" to the people he calls "a three inch fish."
Posted by Michael O'Faolain - at 3:43 PM