A house full of listening "devices" and Google's Mission Statement

It was inevitable. Google has plans for the Google Home to compete with the Amazon Echo... 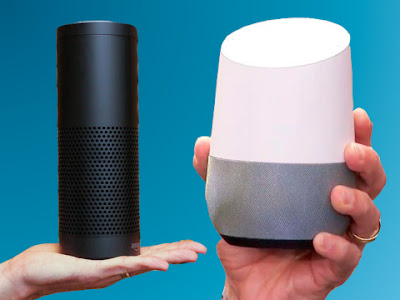 ...which leads me to wonder if it is such a good idea to let Google listen in on us at home or elsewhere. Just how much information do I want to let this one international corporation gather on us? Somehow, except for selling me stuff, I never thought of Amazon in relationship to privacy in the same way I do Google. Maybe I'm paranoid but do I really want to be able to search for what I said on a given Tuesday eight years ago?

I feel, perhaps foolishly, that I have a clear picture of what motivates Amazon - their goal is to sell me stuff through direct sales. Amazon's Mission Statement is: "We seek to be Earth’s most customer-centric company for four primary customer sets: consumers, sellers, enterprises, and content creators."

Google, on the other hand, is deep into AI and self-driving cars and just about anything that could be related and more, which is made clearer when you click on Google Research giving you this screen:

I know that in one sense Google is doing "pure research" which according to BusinessDictionary.com is "research carried out for the purpose of better understanding fundamental concepts within a scientific field, rather than in search of a particular commercial goal. Pure research generally does not produce marketable results, but may be used for later research into more specific and profitable applications." (Wikipedia's entry is Basic research.)

But I also know that Google's Mission Statement is: "Google’s mission is to organize the world’s information and make it universally accessible and useful." I don't see that as a mission statement similar to Amazon's. Let's examine this.

Taken literally - with an awareness of what the internet is and an idea of what it will be - Google's abstract mission statement should be disconcerting, even to those of you who aren't paranoid when you are thinking about a home, car, and pockets full of "devices" that listen for you to talk. Particularly if the devices are made by Google or use technology licensed by Google.

There was a time "listening device" was a pejorative term with synonyms like "bug", thought of as a device used by a "gumshoe" or a Soviet spy. Now, of course, it is the refrigerator you proudly just bought for your kitchen.

What isn't stated in that mission statement but is implicitly understood is that Google first has to collect that information any way it can. Within the context of "the world's information", what I said to my dog a few minutes ago is part of the ever expanding bits of the "world's information" easily collected through my myriad of devices.

But in my case the "microphoned" information is not usually shared with Google by Amazon, which gives me some comfort that we use Echos and our phones and tablets are of the Amazon Fire line which use a very purposed version of Android. Nor is it usually shared by Microsoft from my Surface Pro computers which use Windows. Unless of course I use the wrong App, which on any of these devices I might.

Google's mission is to "organize the world's information." It could be organized into categories like "what people say to animals, subcategory pets, sub-subcategory dogs." Of course people could be divided in nationality like American, white, over-65, pet owner. Or whatever works in a computerized rapid search environment.

Google's mission is to "make it universally accessible." To make it universally accessible it not only would have to be searchable, it needs a decision regarding "in what format" which would be a process of determining whether it should be an audio file or simply transcribed as simple text, or both which seems very "Googley." Then it would need to be associated with my name which is already available online and associated with my home location. And then my dog Spot would have to be given a searchable internet identity.

I'm using an alias for my dog to protect its identity.

And finally Google's mission is to "make it useful."  One has to ask: "Useful to whom and how will it be useful?"  This is problematic since once it is universally accessible, every human and company can then decide how that tidbit of information might be useful. Remember that the tidbit of information is something I said to my dog as heard by a device in my home.

From a commercial standpoint, the pet supply industry most certainly could find it useful if I said to my dog something like "you need a different collar." I could then start seeing ads for collars on news and forum web pages, ads supplied by Google. Of course, that could also be true of Amazon given its mission statement. And since if I look at dog collars on Amazon.com I'll see those ads, perhaps I'm being paranoid.

But from a government standpoint, it's good to know where all the dogs are for enforcing licensing laws - "they" could instantly know I have a new dog and where I live and who I am. It's also good for the agent with an automatic weapon to be prepared to issue commands to my dog when an armed FBI team erroneously invades my home because I talked about ISIS.

But just because I'm paranoid doesn't mean they're not out to get me! There is a Cnet forum thread Coincidence or is my phone listening to me? which offers the answer Yes, It is All Possible which explains:


I used to work for a local government and, as part of my job, I had to send data to the cell network providers for analysis and return of information. For one of the providers, I had to submit the subpoena through a law enforcement website. While there, I got to look at all of the items on their menu as to what law enforcement can do (with a subpoena, back then). They can turn on your phone without alerting you and listen into conversations near your phone and can track you in any way (even if not a smart phone) and, of course, listen in on the phone and record. So, if you were a fan of the T.V. show, The Wire, all you saw there can be done.

From your description of the issue, it sounds like you have Google/Android. Correct? Google doesn't charge anything for Android. Google makes most of their money performing high-tech advertising and one of their claims-to-fame is directed advertising. It is not a secret that they keep tabs on you, the user, for these purposes. There is a Google web page where you can see some of the information they collect about you. A good place to start is to go to their home page and find the (tiny) link for their Terms of Service (TOS; "terms") and their privacy policy. Unknown to many, these documents are not very long and are not written in "legal-ese"; just plain English.

In the Terms, you will find what Google says that they can do with all of your information. This has changed and has been refined over time. The other document, the "Privacy Policy" tells you more about what Google says they actually do with information from you and about you. For example, several years ago, you could find on the Google website that the scan (electronically) or read (by real humans) every document that passes through them. Several years ago, it came out that Google admitted to scanning/reading every piece of GMAIL that passes through them. Yes, it caused quite a stir. The result was that their reading/scanning was moved right into the site's Privacy Policy. Of course, since then, there have been many changes. All this is supposed to be so that Google can direct meaningful advertising at you. Websites have to make money somehow to pay for all of the employees and hardware that they use to bring you the site. It is common sense that the "free" World Wide Web runs on advertising.

As far as using your microphone goes, I assume that it is mentioned in the privacy policy somewhere. However, I would more suspect APPs to be using the microphone more than the base Android. (You do need the microphone to make calls?). In the Apple world (iPhone) they warn you if an APP tries to use the microphone (or location, etc.) and you have an opportunity to think about why and make a decision to allow that or not. Unfortunately, I don't use Android so I can't help you there.

I'm old and started working with computers in 1970. So Google's Google Home - an apt name, since it no longer will be "my" home exclusively - likely will be a hit with Millennials who seem to value privacy not at all. But if I were them, I'd be a little careful.


"Apple designs Macs, the best personal computers in the world, along with OS X, iLife, iWork and professional software. Apple leads the digital music revolution with its iPods and iTunes online store. Apple has reinvented the mobile phone with its revolutionary iPhone and App store, and is defining the future of mobile media and computing devices with iPad."


And then there's Microsoft's Mission Statement which also is not abstract at all:


At Microsoft, our mission is to enable people and businesses throughout the world to realize their full potential. We consider our mission statement a commitment to our customers. We deliver on that commitment by striving to create technology that is accessible to everyone—of all ages and abilities. Microsoft is one of the industry leaders in accessibility innovation and in building products that are safer and easier to use.

But when you consider all of these mission statements, perhaps you can understand why Google devices make me edgy.
Posted by Michael O'Faolain - at 1:35 PM