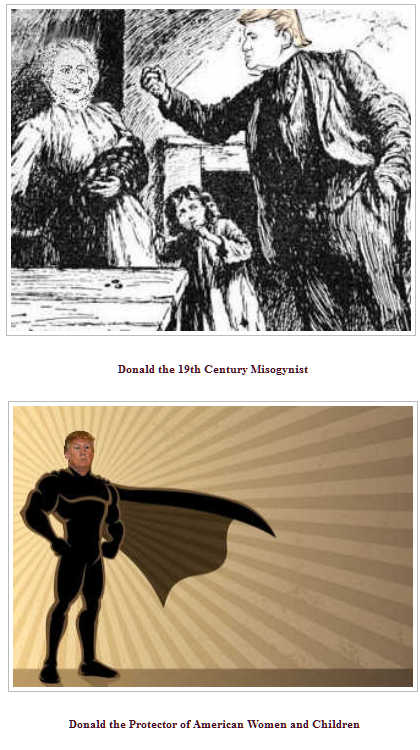 The United States is now full of expert political pundits and members of the professional news media who in 2015 stated without hesitation that Donald Trump could never be the Republican nominee.

The 2016 Presidential Election will be between candidates Donald Trump and the Democratic nominee, most likely Hillary Clinton.

And now many, way too many, Democrats, independents, and those same folks who said Trump would never be the nominee are saying Trump cannot win the Presidency. They are wrong.

Let's begin with the fact that white women age 35-49 continue to poll 39% for Trump, while only 34% will say they would vote for Clinton.

Much is being made about Hillary Clinton playing "the woman card" with a lot of opinion being published like this from Pulitzer Prize Winner Politifact Donald Trump wrong that Hillary Clinton 'doesn’t do very well with women' in which experts point out that polls show Hillary leading Trump among women by 9%, 53% to 34%.

Yeah, 34% makes them think Donald is wrong. At any given point in time in 2016 a misogynistic male with 19th Century attitudes about women could receive 34% of the votes for President from American women voters.

After all, as Donald would say, the alternative is only a female former U.S. Senator and former Secretary of State who has a daughter and granddaughter and who is having a hard time in the primaries because the  Bernie Sanders left believes she's too right-of-center. After all Bernie is a man who knows. Why would any women vote for her.

Polls, of course, are just snapshots at a particular point in time. The international news service Reuters maintains a "rolling" poll system that keeps track of a number of important information points, including Clinton v Trump. Here's how the poll of registered voters likely to vote in November looks today (click on the graphs to see a large version): 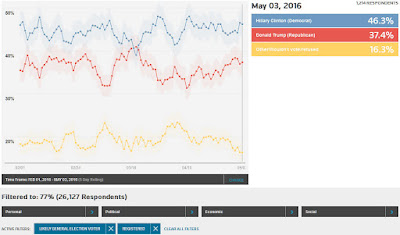 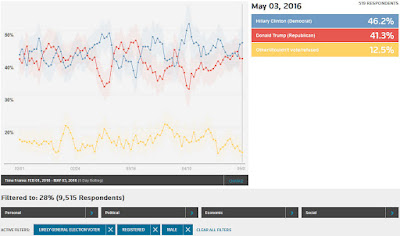 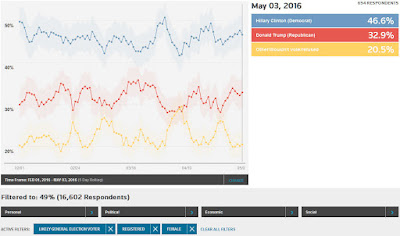 As you can see, variations over time have been significant. But as of May 3, 2016, Clinton had about 46% of the vote regardless of sex. Trump has 41% of the men voters and  33% of the women voters.

When you dig down into the numbers you find what you might expect - that men-over-50 strongly favor Trump over Clinton - 55% to 33%.

But you also find what should be some disturbing information for the Clinton Campaign (again click on the graphs to see a large version). 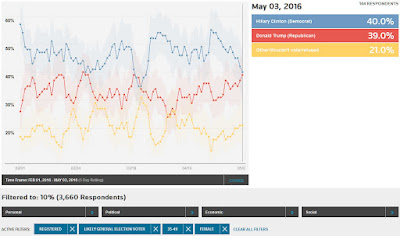 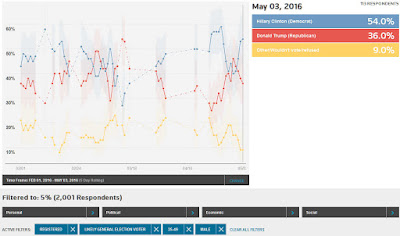 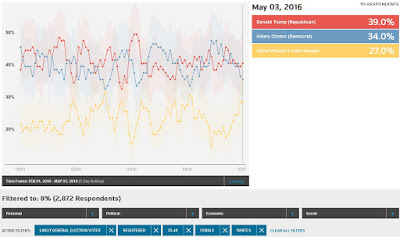 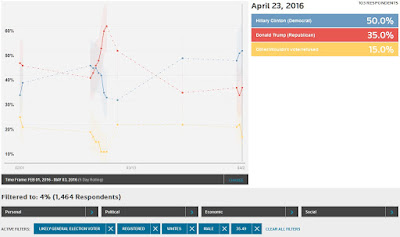 The overall picture for white women is that it is a toss-up between Hillary and Donald with 23% still willing to listen to Donald: 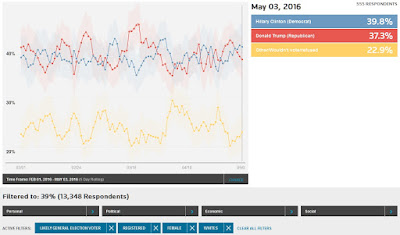 Some might say this is a polling anomaly. But as I pointed out here in the post "The Woman Card" - Donald plans to beat Hillary with 2004 strategy: "While many want to argue that this didn't happen, the general thought about the 2004 election was 'soccer moms' became 'security moms.'"

The problem is, those "security moms" are very important in swing states where a Democratic win occurs with margins of a few hundred votes.

It's too simple to say Hillary has the lead. Right now when we look geographically Clinton's lead is almost non-existent in all parts of the country but the Far West and the Southeast: 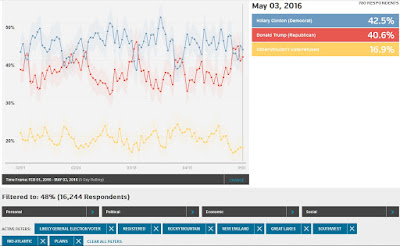 It is surprising, but she does have a lead in the Southeast. 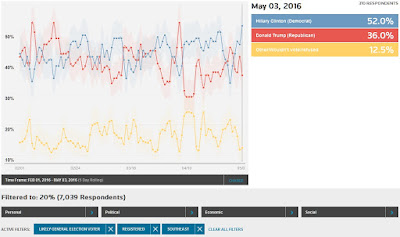 And of course she has a large lead in the Far West (except among white women age 35-49). 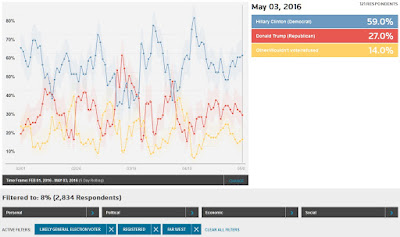 The problem is the Far West states voters will award their Electoral College Votes to the Democrat regardless of who the candidates are.

What Hillary will need is strong support in the the rest of the nation, places like New England where the poll numbers look like this: 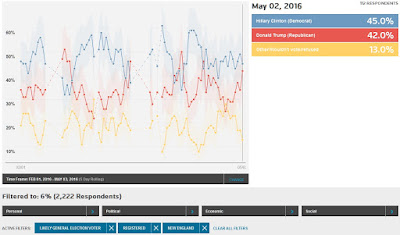 This is Bernie Sanders home turf. Bernie is out  right now campaigning against Hillary Clinton. Bernie's continuing efforts between now and June 7 will be supplemented by an unexpected running mate, Donald Trump.

And whatever Bernie and Donald say about Hillary over the next seven weeks will begin the new media message to beat Hillary between now and November.

This, then, raises the question. Between today and November 8, can Donald Trump actually use his misogynistic male 19th Century attitudes about women to get just enough votes from women in the right states by creating the "Protector of  American Women and Children" image of himself.

It isn't impossible to imagine nor is it silly. This year's election is immersed deeply in a renaissance period of the comic book superhero. Trump is skilled at using media and America's "news" media has become easily used.

In this case, he doesn't have to "leap tall buildings at a single bound", he need only appear the strong male to the "security moms" in swing states like Ohio. Trump succeeded in overpowering a large slate of potentially competitive strong male candidates on the Republican side.

Trump's next challenge is how to overpower a grandmother. Of course, he has the help of Bernie and 61% of other age 50+ white men. And apparently he will have the help a lot of American women, particularly those age 35-49. Given what he has accomplished over the past year, it's hard to see how he will lose.
Posted by Michael O'Faolain - at 10:37 PM