Whether you see it as led by Donald Trump or Bernie Sanders, in this Presidential Election year of 2016 a revolution in American politics is moving forward.

But don't stress. We Californian's figured out what "the establishment" is - POLITICAL PARTIES.  And as usual we are as far out in front of the movement as we can be. There are no party primaries in California except for U.S. President, which we can't control, and for traditional county-level party central committees, which are quaint useless groups anyway.

Now, it is true that California for over a century had many local and a few state "non-partisan" office elections in which no political party is indicated for any candidate. But on June 8, 2010, California voters approved Proposition 14, the Top Two Candidates Open Primary Act, which allows all voters to choose any candidate for a statewide or state and federal legislative office regardless of the candidate’s or voter’s political party preference.

The goal was to get the parties out of the election system.

It took a few years for things to begin to "adjust" to this change. But apparently by 2016 the voters have gotten what they want. These are typical formats for county Primary Ballots for U.S. Senator in California that every voter in the 2016 Primary will ponder: 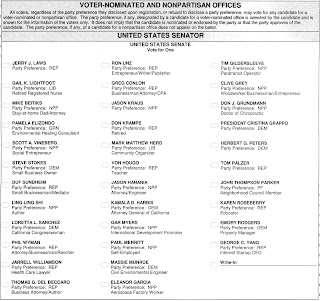 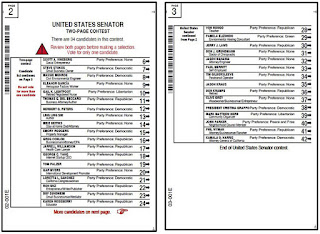 Keep in mind that this is the primary ballot for  U.S. Senate seat currently held by Senator Barbara Boxer who is retiring. Note that candidates can choose to designate their party affiliation, or lack thereof.

Political parties are organizations of wrong-headed

people. But don't get me wrong.

Under our Constitution they are people freely associating who have a right and a tradition to express and advance their views. So to avoid the legal issues that resulted in similar prior voter-approved initiative measures being overturned by the courts, we Californians still let the parties participate.

In California Assembly District 2, for instance, the parties are accorded the opportunity to list their endorsements in the Primary Ballot Pamphlet like this: 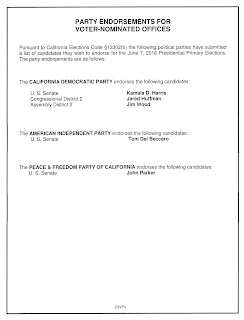 
[California Republican Party Chairman Jim] Brulte, a former state senator, said he has seen too many party leaders get endorsements wrong “again, again and again.” He said they often do more harm than good by fracturing party unity.

And so, following "liberal" California's lead, the revolution actually has taken root in the National Republican Party. There are no Superdelegates, no nothing, to stop "the people" from nominating reality game show host billionaire Donald Trump for the most powerful political position in the world. Trump is not a Republican Party affiliated politician or any other kind of politician familiar to "the establishment." After he is formally nominated in August, the revolution in the Republican Party will be complete as far as those Republicans in "liberal" are concerned.

On the other hand, the "conservative"

California and National Democratic Party officials still think that the participating, contributing members of parties ought to play a role in determining who represents the Party in elections.

So they endorse candidates in California and have Superdelegates to temper the effect of dangerous demagogues who, as described in Federalist Paper No. 10 by James Madison, are "leaders ambitiously contending for pre-eminence and power...whose fortunes have been interesting to the human passions."

In other words, what this country didn't need then and still doesn't need is a bunch of voters who only once every four years get excited about a Presidential candidate, a candidate "whose fortunes have been interesting to the human passions."

Let's take a look at a video:

Right after the fun rallies those independents voted for Obama in 2008. But having no commitment to anything but fun and self, they didn't vote in 2010. As Ms. Bee explained, people who don't participate in elections except when it's fun because a new, shiny Presidential candidate is holding big rallies and using words like "Hope and Change" will have a government that destroys their hopes and make changes that leave their lot in life even worse.

That's because Presidents don't determine most social and governmental fiscal policy in the United States. Members of your State Legislature and members of the U.S. House of Representatives do that. They are elected every two years. And the work to get them elected is done either: (a) by ordinary people in those private community service clubs called political parties, people who work to get the best candidate elected; or (b) political front organizations funded by corporations and the wealthy.

What Bernie's (and Donald's) revolution at the national level is all about is to get rid of interference from those pesky political parties, you  know "the establishment."

California has done it more systematically and we've eased into the process. Now we get headlines like this in the LA Times For California voters, picking a U.S. Senate candidate could be 'like throwing darts at a dart board' and from the prestigious Bay Area public TV and radio group KQED In Case You Forgot … How California’s Top-Two Primary Works.

The KQED piece refers you to Alameda County’s excellent illustrated guide (you know, Alameda County where Berkeley is). That "guide" is really a PowerPoint presentation to support a 45 minute talk on how to vote in California now that we've opened elections up to everyone...well, everyone except maybe farm workers and Denny's waitresses who will never see the presentation. But ant-party liberals don't care about them.

Here's some graphics from that guide that explained what the liberals did in Prop 14. Please notice what is under the groupings of "people" in the upper portion of the image but not under the mess of people at the bottom (remember, click on the image)... 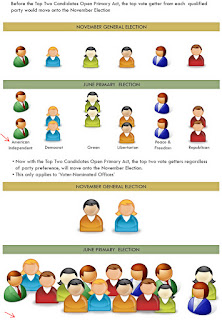 ...that's right, they aren't running for their party's nomination but for a politically correct sounding "Voter Nominated" position in a two person runoff in November.

The only thing is, there is only 15 people reflected at the bottom of the graphic while there are 34 candidates for U.S. Senate this year. Before Prop 14, in a U.S. Senate primary a voter had to select from a few candidates seeking nomination in his/her party. Now they are confronted with 34 who don't have to report to any party members after getting elected.

It's no wonder Alameda County came up with an illustrated guide, but doesn't help one sort through 34 candidates. This system will, of course, favor the Donald Trump name-recognition-media-soundbite-tweet campaign.

And it may relegate political parties to the landfill of history, which could be a serious problem.

You see, it is the off year election that usually screws things up for the working class in this country because enthusiastic young liberals and young minimum wage independents don't vote. And most certainly they just won't do the work needed by the liberal Democrats in a non-Presidential election years.

Of course in 2010 it wasn't the Republican Party that made the election interesting at the local level. It was the now-weakened Tea Party movement that helped, using exciting rallies nationally and at the local level that were fundamentally anti-Obama.

The liberal side has never been able to create such a movement as they prefer to talk on and listen to NPR.

There are the many that won't heed the warning of Samantha Bee. Nor that of James Madison who said:


Hence it is that such democracies have ever been spectacles of turbulence and contention; have ever been found incompatible with personal security or the rights of property; and have in general been as short in their lives as they have been violent in their deaths.