Trumpeting - how to attain the U.S. Presidency 140 characters at a time

According to Wikipedia the loud blasting sound of an elephant which is made during excitement, distress or aggression is called "trumpeting". They are "sound bites" which you can hear by clicking here.

Recently we have seen the rise of another kind of trumpeting which, fortunately for purposes of analogy, is tied to the Republican elephant and the Republican Presidential candidate Donald Trump.

Initially referred to in the post here Trumpeting - also known as the misfirings of a loose cannon, it deserves some further elaboration on its defining characteristics.

For instance, Trumpeting most definitely is limited to short bursts of sound or writing using less than 140 characters. Here are some examples:


Because of the internet we've become a short attention span culture, so a Twitter account can also be used for Trumpeting, for example: 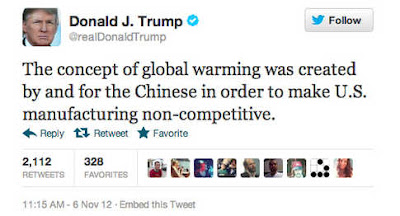 Like an elephant's trumpet-blast to intimidate a lion lurking in the bush, Trumpeting doesn't offer any complex message but fear and confusion.

In fact, the difference between Trumpeting and farting in terms of complexity of prior thought aren't significant.

Which brings up the key question about a person wanting to be President of the United States using Trumpeting as his primary mode of communications - why?

The answer is simple.

The 24-hour nature of internet tabloid-journalism and cable TV and radio news shows creates a demand for intelligible farts from D-list celebrities.  For those who don't know it, Wikipedia explains:


"D-list" is the lowest rating on the Ulmer Scale, and it is often used to describe persons ... generally only known for appearances as so-called celebrities on panel game shows and reality television.

By making Trumpeting the key to his campaign, reality television host Donald Trump successfully shifted the approach of the press in the United States for covering the Presidential "scene" from exploring a candidate's understanding of the complexities of the world and life generally to musing about intelligible (not "intelligent") farts from a D-list celebrity.

Instead of a Presidential campaign, on the Republican side we have had a year of "The Celebrity Apprentice - Most Powerful Person in the World" which was the special version of Trump's reality game show consisting mostly of current and former elected governmental officials as the competing apprentices rather than regular folks.

At a real disadvantage, the others didn't know they were in a competition reality show and most just wanted to talk about detailed ideas regarding foreign and domestic policy. Naturally, the TV networks were thrilled at the profits they were making from viewers enthralled by this new reality game show. Given the novel nature of Trumpeting in a Presidential election, every few weeks the public voted the other contestants off the show leaving Trump as the first season winner.

The next season of "The Celebrity Apprentice - Most Powerful Person in the World" which began this week will feature the Trumpeting of Donald Trump against one person who may be a more formidable returning competitor since she is a former U.S. Senator, former Secretary of State, and former First Lady of the United States.

Whether Trumpeting, both short bursts of sound and writing using less than 140 characters, can continue to be effective beyond being the shiny object that attracts the members of the press remains to be seen. Obviously it has a big advantage over traditional campaigning in gaining name recognition and stirring the emotions of anger, fear, and envy at no cost to the candidate.

In the end, the one question to be answered do Americans really want as their President someone who at best is a celebrity apprentice who has offered as his top skill Trumpeting?
Posted by Michael O'Faolain - at 10:17 AM