The lack of comprehensive political economy goals will create concurrent pecuniary and environmental disasters for the U.S. Gen X and later generations
Part 5.   Whither the future of an America
directed by technology semi-literate voters

In 2018 spending time on a hand-held device texting, posting on social media, reading fake news, and watching cat videos on YouTube is not an indication that American voters aren't technology semi-literate.

But that ignorance will permit 40% of Americans from consistently embracing the interests of large telecommunications corporations in the voting booth because they think immigrants and transgenders are a threat to their children's "way of life."

And so we have these folks doing what the federal government really does: 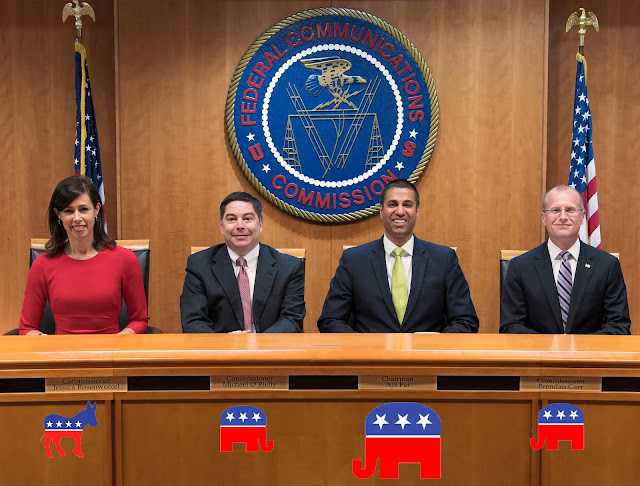 This week those folks will likely end an Obama-era policy before it could be implemented. Three years ago, when there were three Democrats sitting in those chairs, the Commissioners decided to offer airwave licenses for small areas so factories, ports and power plants could set up their own wireless networks without relying on commercial carriers.

The three Republicans are expected to vote Tuesday to abandon the small-area plan known in Europe and Asia as "tiny wireless."

Democrat Commissioner Jessica Rosenworcel said in an email: “Imagine being at the dawn of the Uber age and doubling down on taxicab medallions. That’s what this agency is doing.”

Whether Republican, Democrat, or no preference independent, the average voter has no idea what this is about. As discussed in previous posts in the series, the German and other European governments, along with the Chinese government are implementing Industrie 4.0.

The average American voter will begin to feel the real impacts of these policies in about 2025. This is why the Chinese have titled their program Made in China 2025 as they understand it will take time for their people to see the benefits of the effort. That will be two Presidential elections and four Congressional elections to0 late to act to make our economy competitive for our grandchildren.

General Electric noted that virtually the only parties that favor a shift to PEA-based licensing in the 3.5 GHz band are the major wireless carriers and their main trade association, CTIA. Under the proposed changes, carriers would be in a position to outbid any other parties for PEA or other large geographic-area licenses, according to GE, and once they get the spectrum, the major carriers would turn CBRS into just another generic, commercial wireless band to be integrated into their multiband networks to bolster wide-area mobile offerings in select locations where additional capacity is needed.

GE's comments focused on industrial IoT, saying it wants to keep the existing plan for the benefit of localized, secure private LTE networks in industrial and critical-infrastructure environments and other enterprise settings.

Californian's also have tried. When the deplorable change in the rules was proposed, the Port of Los Angeles,  the nation’s largest and busiest container port handling 9.3 million container units in 2017, filed comment letter objecting to the proposal.

The letter noted that the shipping industry is looking to leverage big data and industrial IoT platforms to achieve better efficiencies. The Port said it’s pioneering the use of advanced data sharing across port stakeholders and having predictable access to 3.5 GHz spectrum is key to developing and deploying these technologies.

“We ask that you do not change the CBRS rules by increasing the geographic areas covered by Priority Access Licenses (PALs) from census tracts to Partial Economic Areas (PEAs),” the Port of Los Angeles wrote. “Furthermore, we are concerned with a proposed increase in license terms to 10 years. Such changes would impede industrial loT utilization and delay the innovation that ports and the shipping industry are on the cusp of delivering.”

The Port of Los Angeles was not the only port to offer such comments.

The City of Los Angeles, objecting to the change, said the existing smaller license areas allow for more focused uses of spectrum. The proposal would “drastically increase the prices of licenses exponentially,” from covering neighborhoods and single-site locations of several thousand people to one of the largest metro areas in the nation.

“Instead of providing affordable access to high-capacity spectrum for schools, hospitals, industrial facilities and competitive wireless broadband providers, among other applications, PALs in the Los Angeles area would cover millions of individuals, even at the county level, making licensed spectrum in the 3.5 GHz band entirely inaccessible to all but the deepest of pockets,” the city said.

Rural America is, of course, a part of the nation that has been unable to recover from the last two economic downturns. "Tiny wireless" within industrial IoT production platforms is critical to Industrie 4.0 which, as noted in a previous post, represents a paradigm shift from centralized to decentralized smart manufacturing and production.

But the United States government operates with a lack of comprehensive political economy goals which will make the country unable to compete in the economic environment of the 21st Century resulting in a pecuniary disaster for the U.S. Gen X and later generations.

This is Part 5 of the series of posts beginning with:


The lack of comprehensive political economy goals
will create concurrent pecuniary and environmental
disasters for U.S. Gen X and all future generations.
Posted by Michael O'Faolain - at 10:18 PM