Trump's nominees for the 9th Circuit Court of Appeals are members of a Neoliberal, Koch Bros funded, organization - the Federalist Society
Californian's face a judiciary which has been approved by
people who think a Californian is worth 3/20ths of a person.

We Americans live in a country in which not a majority of the nation's voters but a late-18th-Century-Constitutional system selected...
Because of this selection system Americans have a government locked into Victorian 19th Century


The 18th Century, when our "elected" officials selection system was established, was a time when there was no electricity, no steam or combustion engines, no natural nor propane gas, no nuclear fission nor fusion; and therefore no telegraphs, telephones, radio, television, computers, electronic devices, internet, railroads, buses, cars, steamships, airplanes, space-travel rockets, nor nuclear weapons; and no tall buildings nor buildings of any height with heating, electric lights, treated water, or sewage disposal systems.

At that time up through the mid-19th Century the perilous transatlantic crossing from England to the former Colonies took at least six weeks and could take as long as two or three months. In the first half of the 19th Century it took six months to sail from New York to San Francisco and about the same length of time for a wagon train to go from Independence, Missouri, to Oregon or California. While using either method of transportation, there were no telegraphs, telephones, radios, or internet to communicate to people at your starting point or destination to, you know, tell them you ran out of food and couldn't find a McDonald's.

Aware of the reality of a changing world, at the end of the Constitutional Convention George Washington said, "I do not expect the Constitution to last for more than 20 years." Twenty-five years later in an 1816 letter Thomas Jefferson stated that a constitution should be revised every 19 to 20 years. Since a majority of adults at any point in time would likely be dead in approximately 19 years, he reasoned, a new generation should have the right to adapt its government to changing circumstances instead of being ruled by the past. On the other hand, in a letter written shortly before his death in 1824 Jefferson stated that the U.S. Constitution could last perpetually if it were regularly amended to reflect new developments in science and society.

Of course, Washington and Jefferson notwithstanding,our 1789 Constitution has not been revised every 20 years nor has it been regularly amended to reflect new developments in science and society. Apparently neither Washington nor Jefferson read it. As regarding amendments it provides:

It hasn't been revised because 12 states, which today could include as little as 4% of the population, can block any proposed amendment, something the largest 10 states with 54% of the population cannot do. Simply new developments in science and society, which generally are reflected in the culture of larger urban areas in the United States, can be suppressed by 18th ideas embraced by land in 12 states containing prairie voles and soybean plants.

Which leads us to 9th Circuit Court of Appeals:


As indicated in a Sacramento Bee article:


After months of negotiations and delays, the White House is moving to fill California’s three vacancies on the influential 9th U.S. Circuit Court of Appeals — over the strenuous objections of the state’s two Democratic senators.
White House officials had been negotiating with Sens. Dianne Feinstein and Kamala Harris, both of whom sit on the Senate Judiciary Committee, earlier in the year about filling these and other federal court vacancies in the state. But that dialogue collapsed this past summer, Senate aides said.
On Wednesday night, the Trump administration announced it was nominating three attorneys to the 9th Circuit, the largest and busiest federal appeals court in the country. Among the thorny issues the court has tackled or could decide on are the legality of the Deferred Action for Childhood Arrivals, or DACA, program for undocumented young people brought to the country as children, the president’s travel ban on people from several Muslim-majority countries, and a lawsuit challenging the White House’s attempts to withhold federal funds from sanctuary cities.
President Trump’s nominees for the appeals court — litigators Daniel Collins and Kenneth Lee and Assistant United States Attorney Patrick Bumatay — are all based in Southern California, are prominent members of the conservative Federalist Society, and have worked for Republican administrations. None of the three were approved by Feinstein or Harris via a process known as a “blue slip,” the senators’ offices confirmed Thursday.

In other words, Trump found three attorneys in Southern California who are members of the Federalist Society. For those who have enjoyed the protection of the 9th Circuit, you may want to read Inside How the Federalist Society & Koch Brothers Are Pushing for Trump to Reshape Federal Judiciary. Or not.

The reality of the federal court system is that the Supreme Court typically only hears 100 to 150 each year. Per its annual report, new appeals filed with the Ninth Circuit numbered 11,096 in FY 2017. Of those 5,358 were Immigration Offenses.

The Koch Brothers Neoliberal network has had limited success in the Pacific states. Needless to say, Trump's impact on California and the other Pacific states will last the longest in the judicial system. It is the Neoliberal wedge to disrupt Progressive policy dominance.

Which raises the Calexit issue. When the problem was just Neoliberals in Congress, one could delude oneself into thinking hard work and time could bring about a change in the attitude of the electorate across the nation. The election of Trump made that a bit harder to maintain that delusion. But now its the federal courts. It could take many decades to restore the Progressive Ninth Circuit as well as the Supreme Court, assuming it is even possible.

Our problem is, of course, the Democracy Delusion.

But none of this is true direct democracy, except maybe in some New England towns. And even then, as explained in a March article in The Atlantic the town meeting form of government doesn't always work out too well.

Power in the United States lies in the legislatures of the states which create the legal framework for most of the laws that affect us on a daily basis and which, in most cases, draw the boundaries of Congressional Districts every 10 years, as they will in the year following the 2020 census. Suffice it to say, the most important elections this year and in 2020 will  be the elections of state legislators.

Generally speaking, the national press barely, if ever, covers those elections. But the very conservative Koch Brothers funded Neoliberal organizations focus mostly on those elections.

Now if you think our Founding Fathers had the right view as explained in that Atlantic article...


To some degree, of course, the unresponsiveness of America’s political system is by design. The United States was founded as a republic, not a democracy. As Alexander Hamilton and James Madison made clear in the Federalist Papers, the essence of this republic would consist—their emphasis—“IN THE TOTAL EXCLUSION OF THE PEOPLE, IN THEIR COLLECTIVE CAPACITY, from any share” in the government. Instead, popular views would be translated into public policy through the election of representatives “whose wisdom may,” in Madison’s words, “best discern the true interest of their country.” That this radically curtailed the degree to which the people could directly influence the government was no accident.

...then you're really not uncomfortable with the reality of American government at all levels. 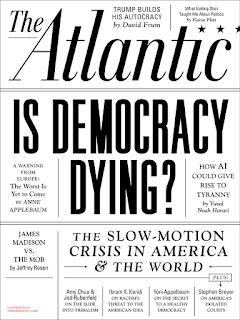 Which then should make informed people puzzle at the cover of this month's Atlantic. No, "democracy" is not dying. Nothing "dies" that never existed. That is simply the biggest of the American lies - that we have a democracy that could be in trouble.

We really need to reconsider our core American fantasy about government. Now I don't want to repeat what I wrote here in the May 1, 2016, post What uninformed person told you the United States is a democracy? It has never been one. It is a union while each of the states is a republic or in the June 17, 2018, post Why factually these United States is a more perfect Union, not a country, nation, or state but it is worth exploring how in our daily language we have reduced our expectations.

Let's begin by considering an attempt to provide the modern definition of the term:

By this definition the idea begins to fall apart in the first line with "by the whole population or all eligible members of a state." At the time of the adoption of the Constitution, the "eligible members" were mostly white male property owners. Now, even back then there were already grumbles about the eligibility requirements. But suffice it to say that democracy in America has always meant participation by only those folks the currently eligible participants are willing to accept. And that is also fundamentally true around the world.

Then we run into "typically through elected representatives." In the United States, we have the United States Senate, half of the legislative branch, made up of 100 Senators each of whom casts one vote on any legislative matters and casts one vote on confirming both:
A U.S. Senator from Wyoming represents a state with a population of 580,000± and the last Senator elected, Mike Enzi, received 121,554 votes out of 164,242 votes cast.

Or to put it another way, for representation in American democratic government it is acceptable that a person in California is equal to 3/20ths of a person in Wyoming which ironically is less than a slave in 1789 which in the Constitution was assigned a representation value of 3/5ths or 12/20ths of a free person.

Keep in mind that if you object to comparing Wyoming to California, Vermont is next smallest state to Wyoming and a person in Vermont is worth half a Wyoming person in terms of representation.

Now one has to acknowledge that in 1789 a person in Virginia was worth only 2/20ths of a person in Delaware in terms of representation in the U.S. Senate, so perhaps we Californians shouldn't find it objectionable.

But in this writer's confused mind as a child, "democracy" began in the United States with "equality" - either in a direct democracy or a representative democracy. And the United States doesn't even resemble that. Perhaps we need to stop teaching our kids that biggest of lies.

And California is going to have to do something about facing a judiciary which has been approved by people who think it is right that a Californian is worth 3/20ths of a person.
Posted by Michael O'Faolain - at 1:48 PM