"We’re modernizing our nuclear arsenal" to save the word of Jesus, Pence warns China and the world at the Koch funded Dr. Strangelove institute

In a speech on Thursday at the right-wing Hudson Institute Vice-President Mike Pence said:


Last month, Beijing shut down one of China’s largest underground churches. Across the country, authorities are tearing down crosses, burning bibles, and imprisoning believers. And Beijing has now reached a deal with the Vatican that gives the avowedly atheist Communist Party a direct role in appointing Catholic bishops. For China’s Christians, these are desperate times.
We’re modernizing our nuclear arsenal. We’re fielding and developing new cutting-edge fighters and bombers....

Now, of course, that isn't all he said. Regarding his remarks as pointed out by a progressive institute Who was Mike Pence really addressing in his speech on China?:


In the case of Vice President Mike Pence’s October 4, 2018 speech, the key audience was a domestic American one, and the clear objectives were to lay the basis for an adversarial posture toward China and to justify President Trump’s accusation that China is interfering in America’s electoral process.
...He also sent a stark warning to American companies, urging them not to abet Beijing’s oppression. On the subject of election meddling, the vice president attempted to shift public scrutiny from Russia to China.
...Since the administration has little to show thus far for how its escalatory instincts on China will deliver material benefits for the American people, the vice president chose instead to highlight how U.S.-China tensions are hurting China....
While there appears to be support among President Trump’s base for a tougher approach toward China, it remains an open question whether the American public will come to support a policy of unvarnished rivalry.

Of course, most Americans don't know that the Hudson Institute was founded by Herman Kahn, the physicist, nuclear-war strategist, and Cold War “scenario planner” who inspired Stanley Kubrick’s Dr. Strangelove or: How I Learned to Stop Worrying and Love the Bomb as explained in Fat Man: Herman Kahn and the nuclear age: 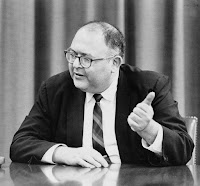 Herman Kahn was the heavyweight of the Megadeath Intellectuals, the men who, in the early years of the Cold War, made it their business to think about the unthinkable, and to design the game plan for nuclear war—how to prevent it, or, if it could not be prevented, how to win it, or, if it could not be won, how to survive it. The collective combat experience of these men was close to nil; their diplomatic experience was smaller. Their training was in physics, engineering, political science, mathematics, and logic, and they worked with the latest in assessment technologies: operational research, computer science, systems analysis, and game theory. The type of war they contemplated was, of course, never waged, but whether this was because of their work or in spite of it has always been a matter of dispute. Exhibit A in the case against them is a book by Kahn, published in 1960, “On Thermonuclear War.”
Kahn was a creature of the rand Corporation, and rand was a creature of the Air Force. In 1945, when the United States dropped atomic bombs nicknamed Little Boy and Fat Man on Japan, the Air Force was still a branch of the Army. The bomb changed that. An independent Department of the Air Force was created in 1947; the nation’s nuclear arsenal was put under its command; and the Air Force displaced the Army as the prima donna of national defense. Whatever it wanted, it mostly got. One of the things it wanted was a research arm, and rand was the result. (rand stands for research and development.) rand was a line item in the Air Force budget; its offices were on a beach in Santa Monica. Kahn joined in 1947.

The Hudson Institute is among the many such organizations receiving funding from the Koch Family Foundations (David H. Koch Foundation) which is part of the broader Neoliberal network explained in this blog in the post The critical civics lesson America & Trump needed - 21st Century Ideologies in America & the Government$ of the United States.

No doubt exists that the Trump Administration is aggressively engaged in an ideological conflict with China. That was explored in the previous series of posts. But in Why you should fear Trumpism's Steve Bannon: war with China within 8 years and other reasons it was noted here that in March 2016 Bannon said on his radio show in a discussion with Neoliberal Lee Edwards of the Heritage Foundation: "We’re going to war in the South China Sea in five to 10 years. There’s no doubt about that."

One could always dismiss that as Alt-Right campaign rhetoric. But five months later Bannon was named the chief executive officer of Trump's 2016 presidential bid. It was recently noted in a news story:


In his very first meeting with Trump in 2015 to prepare for the presidential campaign, China was among the topics they discussed, Bannon said.
“I told him China has been engaging in an economic war against us for the past 20 or 25 years,” he said, adding that Trump agreed with him.

Again, one might wish to dismiss those comments as some kind of effort by Bannon to make himself important. But on Thursday the Vice-President of the United States said:


China now spends as much on its military as the rest of Asia combined, and Beijing has prioritized capabilities to erode America’s military advantages on land, at sea, in the air, and in space. China wants nothing less than to push the United States of America from the Western Pacific and attempt to prevent us from coming to the aid of our allies. But they will fail.
Beijing is also using its power like never before. Chinese ships routinely patrol around the Senkaku Islands, which are administered by Japan. And while China’s leader stood in the Rose Garden at the White House in 2015 and said that his country had, and I quote, “no intention to militarize” the South China Sea, today, Beijing has deployed advanced anti-ship and anti-air missiles atop an archipelago of military bases constructed on artificial islands.
China’s aggression was on display this week, when a Chinese naval vessel came within 45 yards of the USS Decatur as it conducted freedom-of-navigation operations in the South China Sea, forcing our ship to quickly maneuver to avoid collision. Despite such reckless harassment, the United States Navy will continue to fly, sail, and operate wherever international law allows and our national interests demand. We will not be intimidated and we will not stand down. (Applause.)
America had hoped that economic liberalization would bring China into a greater partnership with us and with the world. Instead, China has chosen economic aggression, which has in turn emboldened its growing military.

Again, this speech was given at an organization which at its founding had a focus dictated by Herman Kahn's own interests such as military uses of nuclear power.

There is an old half-joke "I may be paranoid, but that doesn't mean they aren't out to get me." Pence's speech made the leadership of China feel that way. And it most certainly should worry everyone who lives in the Progressive Pacific states which definitely are an ideological target of the Neoliberals, have the closest economic ties to Asia, and are the physically closest to China, as can be seen on this map (click on the map to see a larger version): 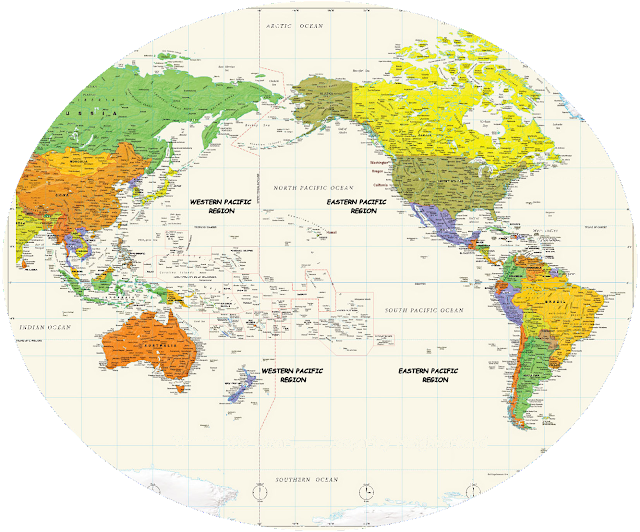