In the introductory post the knowledge system of the academic discipline political economy is reviewed. In this post we turn to the assertive use of "political economics" and how the lack of national long-term goals to benefit the generations born in the 21st Century is a major risk in a political economic contest between nations.

As will be used here "political economics" means the assertive use of that knowledge system as it is outlined by the web page descriptions of the PhD program at Stanford University Graduate School of Business and as reviewed in the 2002 definitive textbook Political Economics: Explaining Economic Policy.

The assertive use of political economics involves the continuous dynamic use of government and business resources to manipulate...
...in order to influence production and trade behavior, plus the distribution of national income and wealth, by altering..
Trump, of course, has used the federal government to establish and/or increase tariffs. As noted here in Tariffs: Trump's excise tax to be collected soon from his deplorably unknowing fans, the tariffs are a tax to be collected from one American institution - consumers - to competitively favor certain corporations which are other American institutions. And under the guise of national security, Trump has created regulations to limit foreign companies acquisition of real estate within the U.S., regulations which limit Chinese companies that compete with Trump's business interests for urban commercial real estate.

"Consumers" are an institution? Collectively, yes. In this context, as indicated in Wikipedia:


"Institutions" are stable, valued, recurring patterns of behavior. As structures or mechanisms of social order, they govern the behavior of a set of individuals within 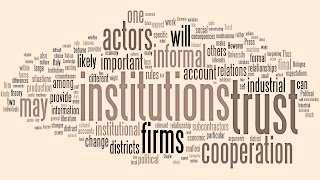 Consider this - property owners and business owners, each as a collective class, are also institutions. In other words, when he was negotiating business or real estate deals, Trump was functioning as just one of many in one of many members of institutions that are studied to gain an understanding formal models of rational choice, behavioral economics, and marketplace structure.

He was a minor piece of the American political economy. Now he uses the Presidency to influence international production and trade behavior, plus the distribution of American national income and wealth.

Even prior to the 2016 election, the Peoples Republic of China was competing with the other nations to become a leader of the world's economy by the middle of the 21st Century. But Trump has moved to turn economic competition into an international conflict using the weapons of political economics. It is likely that the economies of both countries will end up suffering unnecessary delays.

And the social, cultural, and governmental institutions supporting the respective economies of the two countries could not be more different. The institutions are so different that they make China's economy difficult to analyze, much less project what the impact of aggressive political economic tactics will be. And what people in the Trump Administration don't know can hurt us. 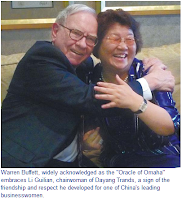 The United States has no long-term economic goals. We depend upon the combined goals of individuals and corporations to achieve an outcome that will be beneficial to our grandchildren.

China has national long-term economic goals. The Chinese are planning for economic success through 2049. Most American companies are arguing over yesterday's P&L results. China's goals have been embraced by Warren Buffett who makes a point of studying such things.

Currently, China is America's only serious competition for 21st Century world economic leadership. Xi is the head of the Chinese government. How he sees the world matters. His opinions matter.

On February 11, 2009, while visiting Mexico, then Vice President Xi Jinping spoke in front of a group of overseas Chinese and explained China's contributions to the financial crisis, saying that it was "the greatest contribution towards the whole of human race, made by China, to prevent its 1.3 billion people from hunger".

Americans should be getting nightly news reports on Xi. Instead we get a steady diet of reports on Meghan Markle and Teresa May. Americans concerned about competing with China should be familiar with writers such as Robert Lawrence Kuhn  who in 2009 wrote How China's Leaders Think: The Inside Story of China's Reform and What This Means for the Future .

Unfortunately for the Trump Administration leadership, xenophobia can get in the way of knowing their "enemy" in the international political economy "war" that Trump started. And it will not be easy for that U.S. leadership to gain much strategic insight into that "enemy" in the future.

Don't think for a moment that Xi and his nation will not do everything they can to make their political economy vibrant in a 21st Century collapsing world environment.

Of course, as the 3,518,020 Trump voters in the Carolinas drying themselves off would tell him, Climate Change is a hoax. Apparently they are unaware that, as explained in the introductory post of this series the Trump Administration formally and officially has declared no Climate Change mitigation actions are needed because the planet’s fate is already sealed, imposing on that portion of the population currently under age 40 severe environmental stress at a generalized level never experienced by prior generations.

That attitude is why Xi has the advantage on that element of the political economics conflict with the United States because it is that portion of the population currently under age 40 for whom the goals are established.

In 2005 as Zhejiang Province Communist Party Secretary Xi famously said in support of establishing environmental "green" goals: "Clear waters and green mountains are mountains of gold and silver." At that time Xi Jinping was not even on any pundits radar. His environmental statement was far from pandering to the popular thinking.  Zhejiang has pioneered an "eco-compensation" system, which enables regions to both preserve the environment and develop eco-friendly industries.

In a country struggling to pull 30 million people out of poverty, it might seem easy to lose sight of the need for adaptation to Climate Change. But for the Chinese, the use of political economics to evolve a way of life has an 8,000 year history.

As noted in the introductory post, Americans must
We will now turn to the subject of China in Part 3. About China's most recent 4000 years.
Posted by Michael O'Faolain - at 10:19 PM