Living "self-cloistered without self-sufficingness" on the Fourth of July in the year of COVID-19. About a new context for old Californians and others 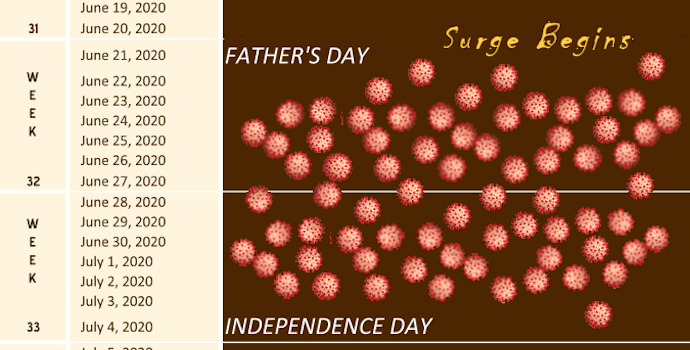 The Fourth of July in the year of Covid-19 certainly offers a new context for an old Californian.

Four months ago, March 4, 2020, our Mendocino County Health Officer declared a local health emergency due to the COVID-19 pandemic. On that day monitoring the expanding pandemic became a fierce focus in our household.

Subsequent to the availability of a Polio vaccine, we saw and felt the impact of annual flu epidemics, though they were and are limited by imperfect vaccines. We lived through the HIV tragedy feeling the sorrow of death among acquaintances. We read with concern the stories of Ebola.

Truthfully, those of us who have lived most of our lives in the post-1958 "Western world" have simply been lucky.

It has also been 109 days or 3⅔ months since March 16 when public health officials in seven counties around the Bay Area introduced approximately 7 million residents to the concept of mandated "protective sequestration."

"Protective sequestration, in public health," according to Wikipedia, refers to "social distancing measures taken to protect a small, defined, and still-healthy population from an epidemic (or pandemic) before the infection reaches that population."

It must be truly baffling for Americans who remember living through the four years of rationing and fighting of WWII to watch the widespread lack of patriotism in the current generations. People today have been asked to give up some of the life they led prior to 2020 for less than four months to protect the lives of other Americans and they have balked at the idea.

California's "shelter-in-place" protective sequestration efforts were for the purpose of "flattening the curve" for a sufficient time period to expand hospital capacity to deal with the inevitable infection surge. Based on the charts below reflecting data through June 30, California succeeded in keeping infections down. Now that we are "opening up" it is obvious what's going to happen, what is happening. 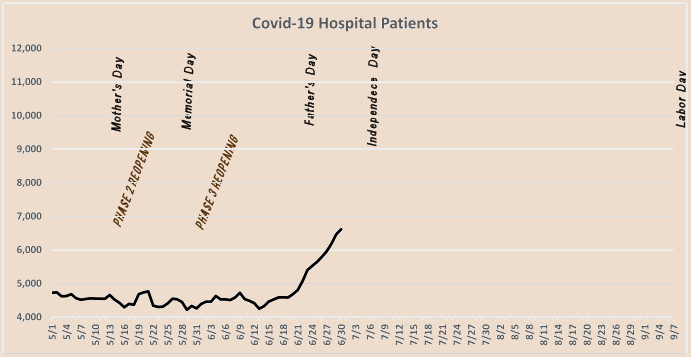 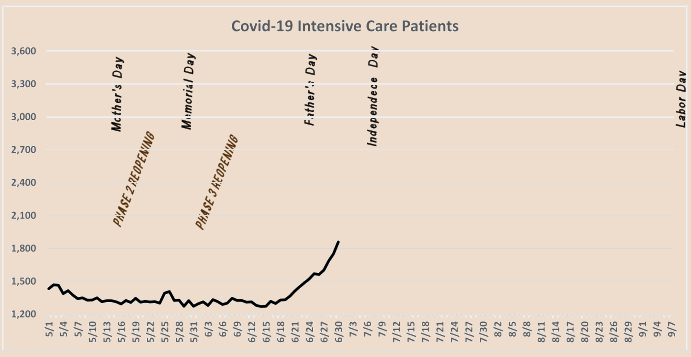 By Fathers Day, June 21, the expected Covid-19 infection "First Wave" surge had begun using those hospital beds. In some California hospitals the ICU beds are full.

We do have widespread testing for infections which are very useful for slowing the infection surge. Finding the infected persons allows officials to place them in quarantine. But the data is not yet useful for defining the extent and impact of the surge.

Since we know that 10% of the population has been tested, it might be reasonable to assume one could multiply those percentages in the table by 10. But we also know that prior to mid-June most of the testing subjects were people with symptoms. Further, the testing only indicates who is currently infected, not who was infected a month ago or will be infected a week from now.

It also appears from the chart below that death statistics are not good indicators of surge levels. 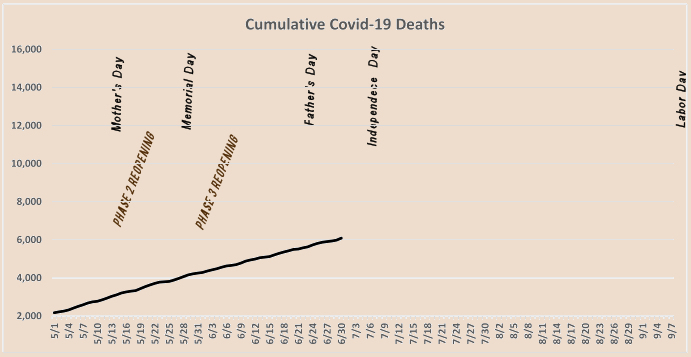 In fact from the February 6 when the first Californian died, through the end of June, Covid-19 has killed 6,000+ Californians, which is 0.017% of the population. That is over a period of 21 weeks. On average every five weeks an equivalent number of Californians die of heart disease. Of the deaths in California to date, 94.0% are persons 50 years of age and older, indeed 75.4% are 65+.

Today no protective sequestration stay-at-home order is in effect. But with or without an order, a choice exists.

On March 13 we chose to become "self-cloistered without self-sufficingness" The goal is simple. Avoid being hospitalized because of a Covid-19 infection.

The death data suggests that for those of us over 65 being "self-cloistered without self-sufficingness" is prudent. We are "self-cloistered" meaning we are staying at home. Being "without self-sufficingness" simply means acknowledging that we are not self-sufficient, we do not grow all our own food, we do not create our own soap. So to safely sustain the basics of our manner of living within the time of the current pandemic, we choose to interact with people only from a distance mostly through 21st Century technology.

In practice that means ordering food and other necessities online which results in deliveries via the U.S. Postal Service, UPS, FedEx, Instacart, and others.

But while Californians like us who live in the forest can limit our risk from Covid-19 by staying home, the risk from wildfire is another story. This past Sunday 40 homes were lost to a wildfire in rural Niland. One resident died. For us Covid-19 is an add-on risk

Unfortunately it is one which has seriously damaged the economy.

News reports on Thursday announced that the unemployment rate in mid-June fell to 11.1%. The headlines offered feelings ranging from "great news" to "hopeful." What the headlines didn't say is:
Nor did the headlines mention the probable continuing reporting error affecting the level of unemployment: 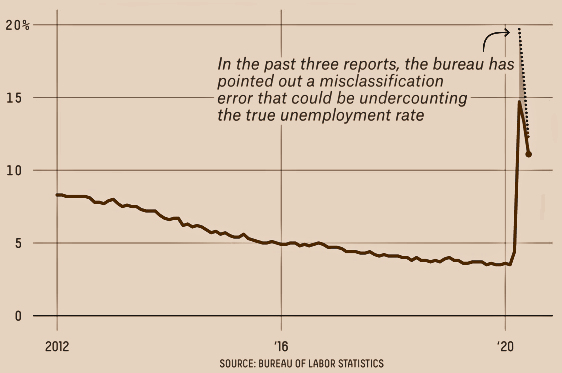 Finally, with regard to unemployment there is the matter of rising numbers of layoffs becoming permanent: 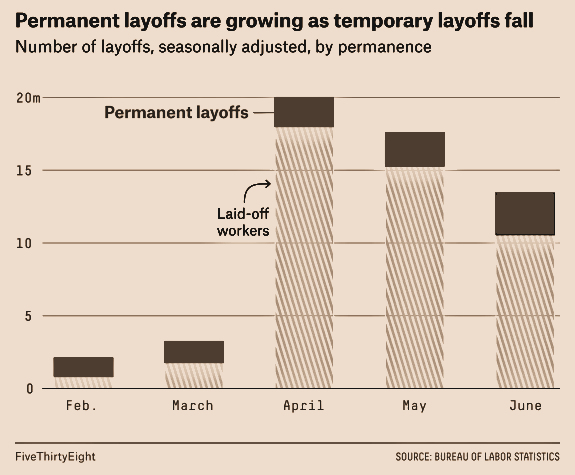 The number of permanent layoffs has doubled since April reflecting a growing awareness by employers that the "great" economy ended sometime in February replaced by an Extended Economic Distortion discussed here on May 7 in Expect a consumer-based Extended Economic Distortion after the Great Economic Lockdown. In terms of employment we likely will have a clear indication of the level of the problem in the private sector by Thanksgiving. We will not get a clear picture of the impact on the 3 million jobs in California state and local government including school districts until next Spring.

By Labor Day we likely will begin to see from the Covid-19 Hospital Patients graph how extended and how distorted the economy will become prior to a Second Wave which likely will happen if we are unable to produce a reliable vaccine.


This too shall pass, though it may take entire decade

As noted at the beginning of this post, the Fourth of July in the year of Covid-19 certainly offers a new context for old Californians like us.

What we don't know about the cause of the immediate crisis, a virus, after these few months leaves us ignorant of long-term impact on many, many people ages 14-50 who become infected but survive.

What we don't know about the short- and long-term impacts of the crisis on California's economy, the world's 5th largest, is significant. The Trump Administration's trade war and disdain for other economic powers now being reflected in international travel bans imposed against Americans will magnify the damage to California's economy. All this triggered by the pandemic Trump supporters denied was happening while their grandparents were prematurely dying.

As noted in the above-referenced May 5 post, in the 20th Century, beginning intensively in 1929 and lasting 50± years,  massive changes in the legal, economic, political, social, cultural, environmental, and technological subsystems were implemented. This created not only the established reality of two "seniors" ordering goods and receiving entertainment over the internet, but the possibility of a significant percentage of workers effectively working from home.

Covid-19 forced the expanded working-from-home trial which could be indicative of more massive changes in the legal, economic, political, social, cultural, environmental, and technological subsystems. It is not surprising that the pandemic enabled younger generations to push more visibly for major revisions to the legal, economic, political, social, cultural, and environmental subsystems to assure some greater semblance of equity by the mid-21st Century.

Yep, the Fourth of July in the year of Covid-19 certainly offers a new context for an old Californian.
Posted by Michael O'Faolain - at 2:41 PM