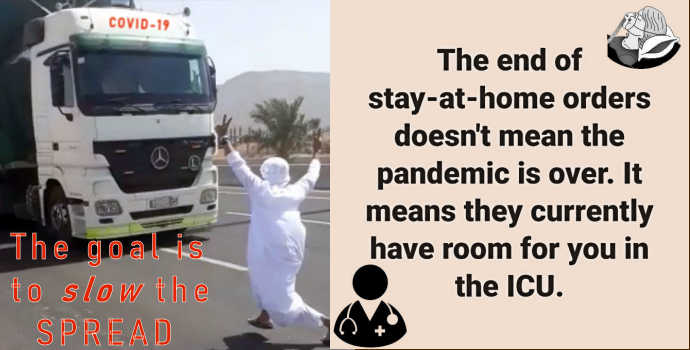 The only goal of the Great Economic Lockdown of 2020 was to slow the spread of Covid-19 cases during the first months of the Coronavirus Crisis. That allowed time to organize enough hospital beds to handle both Covid-19 cases and the normal flow of cases due to other illnesses (you know, cancer, strokes, heart attacks, auto accidents, etc.).

As the Lockdown restrictions are lifted, Covid-19 will continue to spread.The underlying reality for the next "x" number of months (or forever) is that while we struggle to create a new economic and social normal, each day hundreds of people from infants to centenarians will die or become disabled from a Covid-19 infection.

Prognostications from some sources indicate that an economic recovery will begin by the second half of the year. More likely the Coronavirus Crisis will lead to an Extended Economic Distortion.

Mistrust, a general sense of unease, is likely to be felt by most people. And the real meaning of "people" in this context is "consumers" whose spending drove the pre-2020 worldwide "consumer economy." In the United States that consumption represented about 70% of economic activity.

As the shutdown orders within the Great Economic Lockdown of 2020 are lifted many will consume less simply because their income will have been reduced, perhaps substantially. Others will consume less because (1) they will fear of a repeat Lockdown cycle due to an Autumn re-emergence of Covid-19 and (2) they discovered they didn't need to consume at the pre-2020 level to be happy.

An Extended Economic Distortion likely will be the result of consumers not consuming as much as as they did prior to the onset of the Coronavirus Crisis. By "distortion" it is meant that the entire political economy will be twisted out of shape, away from the expected direction.

As noted here in the 2018 series of posts The lack of comprehensive political economy goals will create concurrent pecuniary and environmental disasters for the U.S. Gen X and later generations, dynamic national and international political economies result in alterations to the distribution of income and wealth. A political economy is a system that includes these subsystems:..
...which are interdependent, meaning a change in one will create changes in the others.

Simply it is likely that the Coronavirus Crisis will lead to an Extended Economic Distortion with a political economy twisted out of shape which means the legal, economic, political, social, cultural, environmental, and technological subsystems will turn away from the expected direction.

That is what happened in the 20th Century beginning intensively in 1929 lasting 50± years - massive changes in the legal, economic, political, social, cultural, environmental, and technological subsystems. 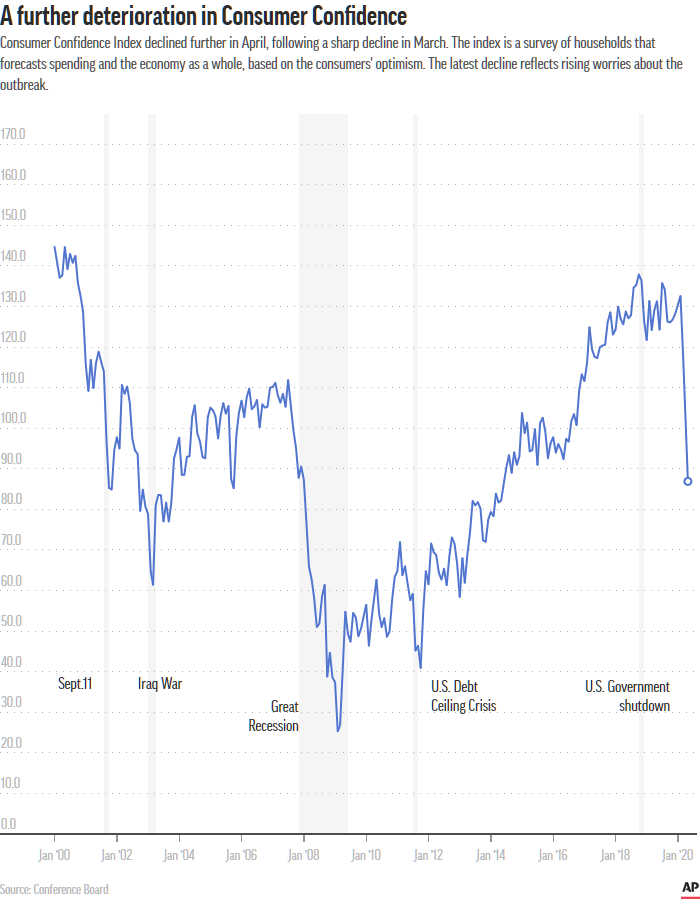 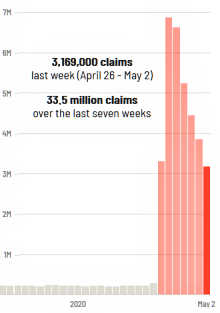 Assuming the 2020 drop in Consumer Confidence matches the Great Recession, at a minimum one would assume we will have a comparable recession. But it isn't that simple.

A recession - a business cycle contraction measured in GDP, income, employment, industrial production, and wholesale and retail sales- generally occurs when there is over two or more months a widespread drop in spending (an adverse demand shock). Historically the events causing recessions have been varied. In 2020 it is the Great Economic Lockdown designed to save lives during the Coronavirus Crisis. This instantly caused a significant employment contraction.

Employment since February has dropped by 19% (based upon unemployment filing statistics shown in the chart above-left) which is three times the drop in the Great Recession. Actually it is a Great Depression-level number. The 33.5 million unemployed is over double the peak number of human adult persons without jobs in the Great Depression. However, it is related to the Lockdown and some employees will be reinstated, maybe most, but certainly not all, as many businesses have shut their doors permanently. 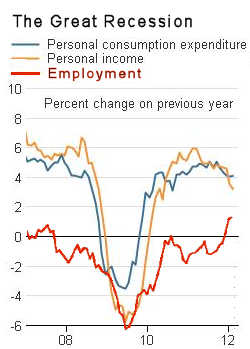 The drop in personal income and the drop in personal consumption expenditures statistics are not yet available. But if employment and consumer confidence have anything close to a direct relationship to consumer spending, the consumer economy will see a significant setback.

Remember that economic conditions are but one subsystem in the political economy. Great Economic Lockdown of 2020 has substantially impacted the social, cultural, environmental, and technological subsystems, albeit some more obvious than others.

Comparing the 2020 situation to the Great Recession, one must recognize s comparison just isn't that simple primarily because of the radical shift in U.S. political, social, and cultural subsystems during the preceding decade. Those shifts led to actions impacting international trade by the Trump Administration. But prior to the Coronavirus Crisis the impacts seemed slow to most Americans other than farmers, accruing as small billion dollar increments.

It will soon be understood that The Coronavirus Crisis and Great Economic Lockdown of 2020 has triggered what is known as an economy-wide adverse supply shock well beyond toilet paper. Historically this has led to stagflation, conditions in which the inflation rate is high, the economic growth rate slows, and unemployment remains steadily high.

The dramatic reversal of the Reshoring Index is primarily due to a major drop in imports from the traditional 14 LCCs, not from a significant rise in US manufacturing output.

This year’s report also shares the second installment of the Kearney China diversification index (CDI), which tracks the rebalancing of US manufacturing imports from Asia away from China to other Asian LCCs, most notably Vietnam.

2019 saw companies actively adapting to what then felt like a major disruption—the US–China trade war—by reducing imports of manufactured goods from China while increasing manufacturing imports from the other countries in our Asia LCC sample, as well as from Mexico.

This contraction is almost exclusively driven by a collapse in imports from China, which declined by 17 percent, likely as a direct consequence of the trade war.

Without doubt, this change was largely driven by trade policy. Since Kearney’s previous report on US reshoring, the country’s economy felt the continued effects of a multiyear trade war, stemming from an America first economic policy. ...While these policies clearly contributed to the dramatic spike in the 2019 Reshoring Index, not all of these events have been positive for US manufacturing, which still faces a number of major challenges. ... The US MGO [manufacturing gross output] stayed flat from 2018 to 2019, in part due to export decline resulting from the trade war.

2020 dawned with a disruption of a new order of magnitude—COVID-19. At this writing, the full extent of the societal and economic trauma the coronavirus pandemic may cause is unknown. But it will be historic. As a result, we forecast that companies will be compelled to go much further in rethinking their sourcing strategies—indeed, their entire supply chains.

Specifically, we expect companies will be increasingly inclined to spread their risks, as opposed to putting all their eggs in the lowest cost basket. More fundamentally, we anticipate that the threat of future crises will compel companies to restructure their global supply chains with an eye toward increased resilience, as well as lower risks and costs, as resilience is the key to operating profitably in the face of ongoing disruptions.

The fact is in 2019 American manufacturing began changing their supply chains in the face of the Trump Administration's trade war. Then "2020 dawned with a disruption of a new order of magnitude—COVID-19" leading to this May 1 Los Angeles Times headline SUVs are left parked on ships off L.A. ports as glut of unsold autos grows and this May 6 Reuters story Port of Los Angeles 2020 volume sinks as coronavirus whacks demand.

In late April the Houston Chronicle ran this story: Oil collapse signals long-running economic crisis for Texas. A headline at the end of the month reflected the stress placed on retail: More than half of mall-based department stores could close in two years. An article this week raises a related issue What happens to Main Street when even the biggest retailers can't pay rent? This doesn't even reflect the crisis facing restaurants and bars, beauty and barber shops, tattoo parlors, and a myriad of various smaller businesses.

Regarding The Great Depression of the 1930's, Wikipedia tells us:


Cities around the world were hit hard, especially those dependent on heavy industry. Construction was virtually halted in many countries. Farming communities and rural areas suffered as crop prices fell by about 60%. Facing plummeting demand with few alternative sources of jobs, areas dependent on primary sector industries such as mining and logging suffered the most.

Back then the government did not immediately intervene with extensive funding provided by Congress and with the Federal Reserve shoring up debt of all kinds. Headlines tell us U.S. Debt Sales to Hit Record With Deficit Headed to $4 Trillion and Fed Is Propping Up Companies It Had Warned Banks Not to Touch, stories that reflect U.S. Government debt liability increases and levels with no precedent and therefore no understanding of implications. These headlines don't take into account the other government stories such as Coronavirus plunges California into worst budget deficit in state history explaining "California’s government faces a $54.3-billion budget deficit through next summer."

Nonetheless, the news stories provide information. Except we don't know what any of it will mean for the lives of the Millennial and GenZ generations.

Of course, this could all be erroneous speculation. Maybe we won't have a recurring or continuing Coronavirus Crisis. Maybe folks will restore consumer spending to its pre-2020 levels avoiding an Extended Economic Distortion. Maybe....
Posted by Michael O'Faolain - at 11:23 AM