The Covid-19 Pandemic Crisis, the Great Great Economic Lockdown of 2020, and the Extended Economic Distortion: A Californian's Timeline. 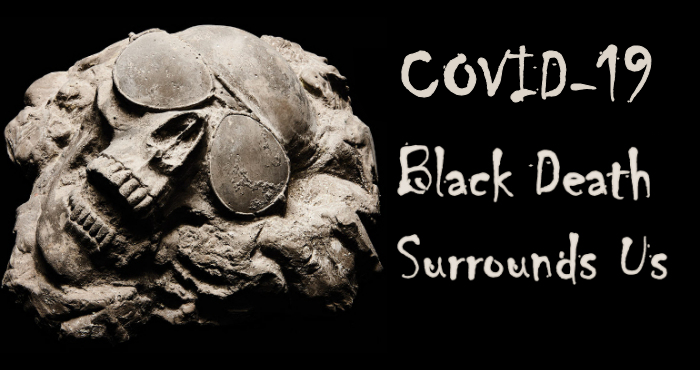 “We are in a worse place than we were in March. Back then we had one epicenter. Now we have lots.”
- Dr. Leana S. Wen, former Baltimore health commissioner.

“This is not a once-in-a-century event. It’s a harbinger of things to come.”
- Dr. Julie Gerberding, former director of the C.D.C.

"If you look at what happened in Europe, when they shut down or locked down or went to shelter in place - however you want to describe it - they really did it to the tune of about 95% plus of the country did that. When you actually look at what we did - even though we shut down, even though it created a great deal of difficulty - we really functionally shut down only about 50% in the sense of the totality of the country."
- Director of the National Institute of Allergy and Infectious Diseases
Dr. Anthony Fauci, testifying before the House Select Subcommittee
on the Coronavirus Crisis.

The Covid-19 Pandemic Crisis, the Great Great Economic Lockdown of 2020, and the  Extended Economic Distortion continue to plague the image of the Dream held by the overconfident American.

The pandemic again demonstrates that Americans have little understanding of the importance of the most basic government services, in this case public health. Partly this is a simple outcome of the inherent bigotry built into capitalism - the "I'm better than you" theme.

We've seen bits and pieces of this in such happenings as the Flint, Michigan, water crisis that began in 2014 and the AIDS pandemic of the 1980's.

Epidemics with fatal consequences caused by microbes which human behavior spreads through the population are not unusual events in history (and pre-history).

It is clear that within the United States the potentially effective Great Economic Lockdown failed because, as noted above by Dr. Fauci, we as a people cannot shift how we think within two months. We simply are unable to abandon the greed inherent in capitalism, shifting to government economic dependency without a definite end date.

In fact, members of Congress are still bickering among themselves, between the two parties, between the Senate and House, and with the Administration, over an extension of foolishly time-limited, about to expire, programs to shore up the economy.

This is all in the midst of the Extended Economic Distortion, the existence of which appears intuitively obvious but is clear from these two charts based on data released this week (click on charts to see full size):

Regarding the 9.5% second quarter drop in the Gross Domestic Product (GDP) which when combined with the 4.8% drop in the first quarter represents a 13.8% drop for half the year, we need to understand that if this loss were annualized we would see a drop of 28%± in the GDP.

About distortion. The reality is that the drop in the GDP has not affected the so-called 1%, the wealthy. In terms of wealth it also has impacted only a low percentage of upper middle class wage earners as opposed to low income service workers. Distortion.

With the formal unemployment number at around 17 million, or about 12%, and evidence that the number is increasing there is little doubt that our economy is now distorted.

The extreme distortion is that the unemployed are primarily lower-paid workers. While the initial $1,200 aid payment to all plus the additional $600 per week to the unemployed limited the distortion, as of August 1 the effect of those limiting efforts will cease.

How will all this play out in the future? It would have been better if we were one nation of united peoples, but the United States was not created for that purpose. Perhaps the only time in our history that we offered such a picture of unity was during WWII.

We know that different nations have achieved different levels of infection, some having minimized the infection spread.

But we must acknowledge the quote by Dr. Wen - the U.S. has "lots" of epicenters. At some point the pandemic became hundreds of smaller epidemics, each with its own characteristics based upon the behavior of people of local cultures.

It has become clear that with each state having its own Covid-19 policy, the result is a 50 state epidemic management program.

Within each state, localities have seen infections develop and spread differently creating local epidemics with differing impacts. For instance, this week the last county in California without a confirmed case, Modoc County, reported two.

As the Covid-19 pandemic continues, in our household we have begun to limit our tracking of the illness statistics to California and to our county.

When California issued the first statewide "stay-at-home order" the stated purpose was to gain time to prepare our hospitals. So how is California doing? Let's look at the graphs (click on graphs to see larger version): 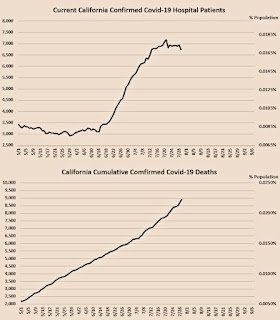 The "as expected" is emphasized because at no time did any knowledgeable Californian think that Covid-19 infections were not going to climb. If you look at the deaths chart you will see a reflection of the increasing caseload. A steady increase can be seen, until after the Fourth of July when the line started a slight curving upward.

Essentially, that is about the best that can be expected as the days, weeks, and months pass. (No caseload chart is offered as the testing effort is not a reliable indicator of actual cases.)

The hope is that the hospitalization graph line will continue over time to turn downward. That would indicate what is happening in terms of the number of cases.

Because we don't know enough about the virus to predict when it might take a pause, all we can do is scroll down looking at the timeline to the right.

Hopefully that will help maintain perspective and patience. We will need that because the Extended Economic Distortion will not be corrected in the period of the timeline.
Posted by Michael O'Faolain - at 3:27 PM