Being old during this time of protest means trigger-memories are being activated. One of those is the Buffalo Springfield song "For What It's Worth" (view the YouTube video above).

Beginning March 1, 1964, in response to the racially discriminatory hiring practices at the Sheraton Palace Hotel in San Francisco approximately 4000 people protested, occupying the hotel, seeking equal hiring practices and for the hotel to have black individuals in executive positions.  Reminiscent of current political thinking, as explained in Wikipedia:


The administration of UC Berkeley believed that on campus political advocacy was partially to blame for the high percentage of student involvement in the widely media publicized Sheraton Palace demonstration. In response to such student political activity, on September 16, 1964, Dean of Students Katherine Towle released a letter stating that political organization was no longer permitted on the corner of Bancroft and Telegraph. This intersection had served for years as a gathering place for students to hand out pamphlets and organize for political means. In protest of the recent ban on political activity and on-campus political organizations, the student group, CORE, erected a table in front of Sproul Hall.

U.C. Berkeley became infamous for the protests of the 1960's. Note that at the beginning the issue was racial equity, not Vietnam.

Fast-forward to the Sunset Strip riots in West Hollywood, California in 1966, early counterculture-era clashes that took place between Los Angeles County Sheriff's Deputies acting at the behest of city administration and young people of the hippie and rock and roll counterculture. As described in 2016's What Were the 1966 Sunset Strip Riots Really Like? Eyewitnesses Look Back:


It all climaxed on Nov. 12, 1966, outside teen hangout Pandora’s Box, with the infamous “Riot on the Sunset Strip.” The riot itself was a long-simmering eruption triggered by weeks of harassment of teenage freaks by the L.A. County Sheriff's Department, which had begun to aggressively enforce the 10 p.m. curfew after a ceaseless tide of complaints from Sunset Boulevard business owners annoyed by the sidewalk-clogging congregation of youths.
“The curfew enforcement was just a tool because all these long-haired kids were out ’til 2 a.m.,” says Michael Rummans, a founding member of Pandora’s Box staples The Sloths. “Walking down the street, sitting on bus benches, just hanging out. The merchants said it was bad for business, we were scaring customers away, and they influenced the Sheriff’s Department to start cracking down.”
"Next Saturday...the one thousand came: frat party boys, Marines on leave, pre-hippies and stoned high schoolers, plus cameos by Peter Fonda, Sonny and Cher and even Gilligan, Bob Denver. As we headed up Crescent Heights, we could see the battle lines being drawn up ahead. Two squad cars roared past us — the pigs were shutting it down, man.”
Kids stalked around with corny protest placards (“We're Your Children! Don't Destroy Us,” “Ban the Billyclub”), blocked traffic, broke a few windows. Sonny and Cher pleaded for calm outside Pandora’s Box. That was about it. They weren’t even riots...."

The irony is the Sunset Strip riots' most lasting effect had to do with the music that came out of the event. "For What It's Worth (Stop, Hey What's That Sound)" written by Stephen Stills because of the Sunsent Strip riots became an anti-Vietnam War song. But in truth it is about the conflict between the police and protesters. Here are the lyrics: 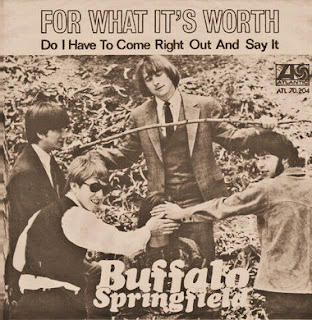 I think it's time we stop
Children, what's that sound?
Everybody look - what's going down?

It's time we stop
Hey, what's that sound?
Everybody look - what's going down?

I think it's time we stop
Children, what's that sound?
Everybody look - what's going down?

It's time we stop
Hey, what's that sound?
Everybody look - what's going down?


And so for my generation of Californians, it seemed that the 1964 protests about the racially discriminatory hiring practices at the Sheraton Palace Hotel in San Francisco and the Sunset Strip police-versus-the-defiant riots in 1966 evolved into the nationwide 1968 violence-of-the-right culminating in the Kent State shootings of 1970. We still remember the Chicago Police, at the urging of a Democratic Chicago Mayor, using violence against "anti-patriotic" protesters objecting to both Civil Rights and Vietnam War policy failures at the Democratic National Convention held during a year of violence, political turbulence, and civil unrest, particularly riots in more than 100 cities following the assassination of Martin Luther King Jr. on April 4 and then Robert F. Kennedy on June 5.

Just as in today's protests, none of the state-sponsored violence was necessary. Just as today the state-sponsored violence comes from an underlying popularity of fascist beliefs associated with the fear-of-others-tradition of American greed. The economics of business was pitted against the objection to racial inequity and the police misuse of authority. Then, of course, it was buttressed with anti-communist propaganda creating a fear of loss of capitalism.

Today businesses, particular small businesses in huge numbers, are threatened by the Covid-19 pandemic. The Covid-19 pandemic has deliberately been made into an issue for the right akin to the Vietnam War - protecting the freedom of Americans versus left-extremists who must be suppressed.

In addition the right-wing elements in the federal national and international security apparatus and the military have effectively created an unwarranted fear of the only remaining meaningful "communist" nation, China, as a source of business and job losses. And while to some not paying much attention it may seem that it is a Trump Administration/Republican effort, in fact Democrats in the Senate and House are supporting this propaganda.

And if you haven't noticed, small groups split off from the BLM protests to damage property. Initially they were a few vandals and petty crooks. But the number and nature incidents are growing leading to indignant condemnations from the middle-aged, middle class white community.

I recognize that many, maybe most, would consider these thoughts as some kind of paranoia. But having lived through the 1960's, working as a reporter on a daily newspaper in 1967-69, what I see happening today looks thematically all too familiar.

Ultimately, the real issue is whether the goals of the current protests will blow away in the wind of American business-owner "I've got mine" outrage as it did by the mid-1970's. It will be sad if that happens.
Posted by Michael O'Faolain - at 2:29 PM