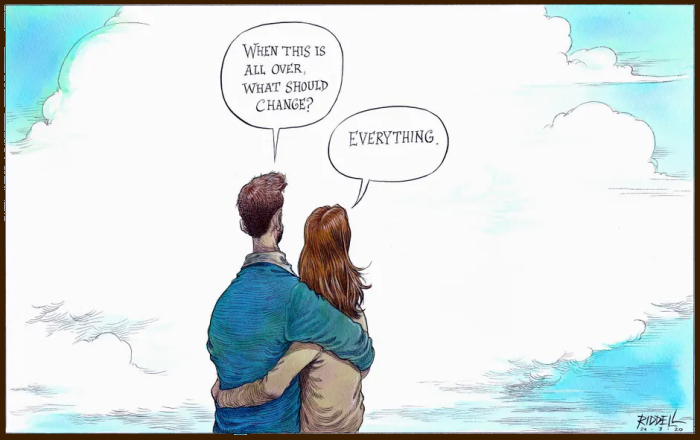 The above drawing offers an assumption that "this" will be "all over." Still it suggests that "everything" should change. But what if Covid-19 will never be "all over"?

Hopes and promises expressed about Covid-19 herd immunity gained from...
...should be received with considerable skepticism.

On April 21 we noted here in a post regarding herd immunity:


Though people who recover from Covid-19 likely will have some degree of immunity for some period of time, the specifics are unknown. For instance, we don’t yet know why some who’ve been diagnosed as “fully recovered” from the virus have tested positive a second time after leaving quarantine. For instance, we don’t know why some recovered patients have low levels of antibodies.

In mid-June some of us read Chinese study: Antibodies in COVID-19 patients fade quickly telling us: "The authors said the findings suggest that it could be risky to assume that recovered patients are immune to reinfection, which may have implications for how long to maintain physical distancing restrictions."

This week an article in The Guardian Immunity to Covid-19 could be lost in months, UK study suggests explains:


People who have recovered from Covid-19 may lose their immunity to the disease within months, according to research suggesting the virus could reinfect people year after year, like common colds.
Prof Jonathan Heeney, a virologist at the University of Cambridge, said the study confirmed a growing body of evidence that immunity to Covid-19 is short-lived. “Most importantly, it puts another nail in the coffin of the dangerous concept of herd immunity,” he said.
“I cannot underscore how important it is that the public understands that getting infected by this virus is not a good thing. Some of the public, especially the youth, have become somewhat cavalier about getting infected, thinking that they would contribute to herd immunity. Not only will they place themselves at risk, and others, by getting infected, and losing immunity, they may even put themselves at greater risk of more severe lung disease if they get infected again in the years to come.”
Prof Robin Shattock of Imperial College London said the study was important and indicated that neutralising antibodies rapidly wane. “This certainly suggests that we cannot be confident natural infection will be protective for a significant proportion of individuals, nor certain of the duration of any protection.”
“It does indicate that vaccines need to do better than natural infection, providing consistent responses in the majority of individuals and sustained levels of protective antibodies. Ultimately this may require the use of annual boosting immunisations, particularly for the most vulnerable. This could be delivered alongside annual influenza immunisations.”

Of course, it would be great if we get a vaccine. Unfortunately for the United States there is a significant overlap between the anti-vaccination crowd and the anti-mask folks. If Covid-19 becomes the annual "cold" infection that kills people, instead of herd immunity we might see a thinning of the herd in the U.S.

But what if we never achieve "herd immunity" because we never find a really good vaccine? It might be worthwhile to consider how life would change beyond regularly working from home for those who can.
Posted by Michael O'Faolain - at 2:28 PM