California (and the nation?) fading into the ashes... 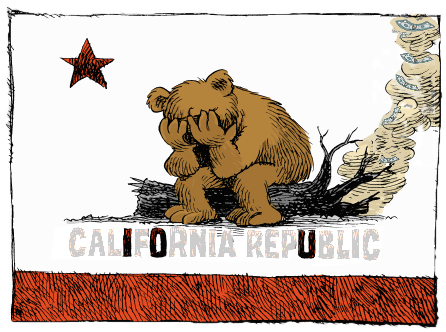 The above graphic appeared in the July 19, 2009, post here Fading Into the Ashes  in which a fear was expressed:


Once known for its economic opportunities, for its schools and higher education system, and for its commitment to the social compact, California is fading into the ashes, the ashes from wildfires and the ashes from Californian's burning through their wealth.

Wildfire season is underway now. Maybe it won't be as bad as the past few years or as expensive.

On January 11, 2012, in the post The Golden State to become The Brown State: The 5-Year Plan the following warning was offered:


Next we have the spin on reducing the cost of CAL FIRE:

Under this proposal, responsibility for fire protection and medical emergency response in these populated wildland areas will be assumed by local government. As a result, this proposal will ensure that local jurisdictions making land use decisions which result in housing development encroaching in wildland areas are also responsible for providing the necessary emergency response services associated with more highly populated land use patterns.

Those are the two earliest of the 11 posts here that discussed the wildfire problem.

And it was "at least five years" from 2012 before the public started to notice the wildfire damage problem. As noted in Wikipedia: "In terms of property damage, 2017 was the most destructive wildfire season on record in California at the time, surpassed by only the 2018 season,"

The year 2020 is the year California finally ran into the firefighting wall - a shortage of firefighters and equipment, a shortage of money. The year 2020 has been the largest wildfire season recorded in California history, but since the peak of the wildfire season usually occurs between July and November we won't know just what "largest" will mean.

State and local government were already facing a financial crisis because of Covid-19. The fire fighting costs will exacerbate that. And the fires will compound the economic impact of the pandemic.

On January 12, 2019, John Poimiroo, California’s former state tourism director and an active outdoor and travel writer, wrote in The San Francisco Chronicle Why wildfires pose an existential threat to California tourism. Of course, in the middle of the 2020 Covid-19 pandemic, it may be difficult for those who depend on tourism for a livelihood to focus also on the wildfire problem. But the article began by quoting then-Governor Jerry Brown from a November 11, 2018 news conference:

In the fall of 2019 which followed Poimiroo's article we read Kincade Fire’s destructive toll on Sonoma wineries, vintners which emphasizes the impact on just one industry - wine production and sales - which does involve tourism among other sources of revenue. But what most don't think about is wineries 'quietly dumping a smoke-tainted vintage."

Of course, the fires of 2017, 2018, 2019, and 2020-to-date destroyed an estimated 20,000 homes worth about $6 billion. This has created 60,000± homeless people whose real and personal property asset value depends entirely on insurance companies. In communities like Paradise, the place of employment of those people was destroyed by the fire, literally or as a side effect.

It is probable that Covid-19 will be addressed within a year with vaccines. But as Jerry Brown said just before he passed the Governor baton to Gavin Newsom, wildfires were the "new abnormal" in California - except they are the new normal. 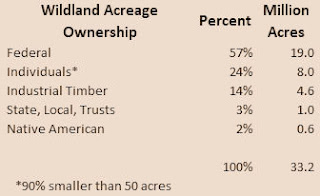 We've had to suffer the specter of President Trump talking about California not maintaining their wildlands. This year to date more than 1.1 million acres have burned on federal lands in California, compared to 769,032 acres on non-federally managed lands. That's 59% on federal lands which, as can be seen on the chart to the left, is consistent with the share of wildland owned by the federal government.

With that said, for decades environmental groups in California have been fighting over proper maintenance of wildlands, fighting with timber companies and, most importantly, have been blocking federal decision-making. Keep in mind that the State of California and its political subdivisions own 3% of the land - comparatively not much raking involved, Donald.

The fact is right now the feds and the private sector together control 95% of California's forest lands.

But CalFire and local fire districts bear the brunt of the fire fighting to protect people and property.

The critical question now is how the private sector, State government, and local governments are going to survive the combined impact of Covid-19 and wildfires that have occurred during Donald Trump's Administration.

As noted here in 2009, California is fading into the ashes. Don't expect Google or Facebook to offset a potential collapse of California's economy. And remember: "As California goes, so goes the nation."
Posted by Michael O'Faolain - at 5:27 PM