The Golden State to become The Brown State: The 5-Year Plan

California is nicknamed "The Golden State." Adopted by the Legislature in 1968, it reflects back to the California Gold Rush which lasted about eight years. After that? The state has had its many economic periods, most like the Gold Rush, short lived, beginning with a boom and ending with bust.

In the late 1970's California was going through one of those booms, a real estate boom. It had some political fallout - Proposition 13. Then Governor Jerry Brown was partially responsible for that fallout, as explained in a previous post. Now he is Governor again and, due to his lack of foresight and leadership then and now, he is proposing to make California unofficially "The Brown State" in five years.

"Golden" reflects the hope and dreams of California. "Brown" reflects what the state's dreams have turned to. Jerry Brown's dad was also a Governor. Edmond G. "Pat" Brown's two terms as Governor were at the end of the "hopes and dreams" period and can be summarized as follows:


Brown's two terms were marked by an enormous water-resources development program. The California Aqueduct built as part of the program now bears his name. He also presided over the enactment of the California Master Plan for Higher Education, fair employment legislation, a state economic development commission, and a consumers' council.

He was the last Governor of "The Greatest Generation" which after WWII invested heavily in the future of the State. Since that time all generations have chosen to "invest" in themselves.

But that's the past. At the beginning of his third term in office, this week Governor Jerry Brown "2.0" has offered his first shot at 21st Century political leadership in the form of a budget proposal. After a big publicity run-up on the problems of the budget and how he would present it honestly to the Legislature and the public, he submitted an expenditure budget that is $25 billion higher than I thought possible.

But who am I? Brown is, it turns out, a miracle worker. Somehow he has taken a State General Fund cash crisis and turned it around. I prepared the following comparison sheet to discover what he has proposed: 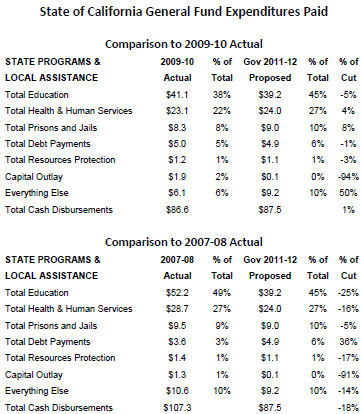 It's actually a miracle. Despite the much criticized "smoke and mirrors" of one-time fixes, plus temporary tax increases plus taking funds from local government all used to balance the 2009-10 budget, Brown has been able to propose a budget that will not be reduced from that year, in terms of total cash paid out! And he did this without expecting much of an economic turn-around!

Hmmmm.  Maybe we'd better take a look at the income side of the ledger:

Obviously, this is all confusing, as is much of the 266 page 2011-12 budget summary. But if you notice a 25% increase in corporation tax revenue over the current year (15% increase over the "boom times" 2007-08 fiscal year) you immediately start to wonder about this miracle budget.

Wading through the text of the budget summary document, the answers are there:


To maintain funding for schools, fund public safety services at the local level, and to balance the budget, this proposal maintains current tax rates for another five years. The Budget also proposes to uniformly apply the single sales factor income allocation rules to certain corporate taxpayers and to eliminate an ineffective tax expenditure program. These proposals will generate $12 billion.

While most of the budget solutions are ongoing, the Budget includes some one-time savings and borrowing. These include $1.8 billion in borrowing from special funds, $1.7 billion in property tax shifts, $1.0 billion from Proposition 10 reserve to fund children’s programs, and $0.9 billion from Proposition 63 moneys to fund community mental health services. $8.2 billion of the budget gap is one-time in nature. Closing a portion of the gap with some one.time solutions is appropriate because a portion of the budget gap's one-time in nature.

So Brown proposes to balance the 2011-12 General Fund Budget using
One has to ask: "Why a five-year continuation of the temporary tax increases?"

The answer comes very quickly - Jerry Brown isn't planning on serving a second term this time as he would be 77 years old.

But what a mess he plans on leaving.

Tax revenues needed (in his words) to "maintain funding for schools" and "fund public safety services at the local level" would disappear in five years.

Then there is the whole government "Realignment" proposal which supposedly will be the answer to California's government funding problem.

First there is the spin on his law enforcement proposals:


Public safety in the community is more than public safety officials on patrol, management of the local jail, or fire prevention and response. Public safety is a community effort which involves the safety of children who are in the county child welfare system, the safety of adults through the Adult Protective Services program, as well as such supportive services as mental health and substance abuse treatment services, which people need to successfully change their lives.


In simpler language, he is proposing that "low level offenders" be housed in local jails or monitored by local probation departments. Counties, which have been and are laying off employees, will get some money for this, from the temporary five-year tax increase.

This will move issues of increasing costs away from the State back to the counties, as the prison overcrowding issue becomes less urgent, and it won't reach a crisis level for five years when it will be a local government problem. (He is also proposing to keep the courts under the state jurisdiction but transferring responsibility for court security back to the counties, again with funding from the 5-year tax increase continuations.)

Next we have the spin on reducing the cost of CAL FIRE:


Under this proposal, responsibility for fire protection and medical emergency response in these populated wildland areas will be assumed by local government. As a result, this proposal will ensure that local jurisdictions making land use decisions which result in housing development encroaching in wildland areas are also responsible for providing the necessary emergency response services associated with more highly populated land use patterns.

A whole series of mental health and social service programs are proposed to be shifted to counties, supposedly with revenues. Describing each and every one would take many, many more paragraphs here. So I'll limit the discussion here to the mental health proposal which would shift three programs to counties explained as follows:


The Early and Periodic Screening, Diagnosis, and Treatment (EPSDT) Program, which is a mandatory federal program under Medicaid designed to improve the health, including the mental health, of low.income children under the age of 21. The EPSDT program is funded by the General Fund and federal funds with the counties paying a 10.percent share of cost above a specified baseline.

State.mandated mental health services for special education students (AB 3632) are those services included in an Individual Education Plan (IEP) that county mental health must provide to have a student succeed in school. This mandate has been suspended for 2010-11.

Beginning in 2011-12, these three programs would be funded with Mental Health Services Act (Proposition 63) funds rather than General Fund, resulting in savings of $861 million. This would be a one-time use of Proposition 63 funds; beginning in 2012-13, these programs, as well as community mental health services currently funded with 1991 realignment funds, will be funded through the proposed revenue source.

This sounds plausible, except any reasonable person should ask: "Aren't Proposition 63 funds being used for other programs now?"  And many of us with short memories also need to ask: "What was Proposition 63?"

In 2004 the voters approved Proposition 63, levying a 1% income tax on personal income in excess of $1 million. That money was to be used as described in the ballot measure to remedy some of the more serious gaps in our mental health system.

In fact, these funds have been used extensively by counties for programs as intended, using the funds to match extensive federal funds. Brown's proposal is exactly the type of diversion of funds voters thought they were objecting to when they voted for Proposition 22 in the same election Brown was elected.

What Brown is really doing is adding to the burden of Proposition 63 funds three programs now funded by the General Fund, and he's handing them off to counties. This avoids the onerous task of he and the Legislature deciding to reduce mental health services, something their base constituencies would find objectionable.

Foolishly I thought Brown was going to offer a severely reduced balanced budget to the Legislature with a possible solution such as proposing to increase the Proposition 13 tax rate of 1% of assessed value to 1½% of assessed value to avoid completely devastating our systems to educate and care for children. I thought he was going to create a serious discussion about the future of California government rather than attempt to put it off for five years.

In five years, the opportunities to keep California "golden" will be even more severely constrained. This is some legacy the son of Pat Brown is going to leave us.

Of course, with these proposals he simply just restarted the same old political arguments....
Posted by Michael O'Faolain - at 5:09 PM