Fading Into the Ashes 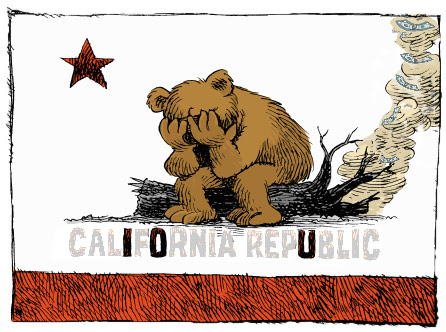 Once known for its economic opportunities, for its schools and higher education system, and for its commitment to the social compact, California is fading into the ashes, the ashes from wildfires and the ashes from Californian's burning through their wealth.

However, most are choosing to ignore this California, "the other shoe" in the economy. According to news reports this morning, things are looking up in the economy because the Conference Board issued a news release that the Leading Economic Indicators "increased for the third consecutive month in June" even though the same news release notes that "the strengths among the leading indicators have remained balanced with the weaknesses in recent months."

At this point, the significant segment of the economy will be State and local government. Everyone seems to be aware of that in the abstract, but fail to relate to the consequences of the major retrenchment facing the state.

Despite the fact that it is likely they will have to "find" at least another $10 billion for the General Fund between now and next July, the Legislature and the Governor are reported to be close to a revised July 2009-June 2010 budget using a several of one time "fixes" for California's $26 billion General Fund deficit, a deficit number which we already know could be 50% too small (see A billion more.... below).

As proposed, the "balanced budget" involves taking more than $4 billion from cities, counties and special districts. In order to avoid being sued over whatever contrivance is dreamed up, a promise of future repayment is in the proposal which everyone knows can't occur for at least three to four fiscal years, if ever. Reports indicate that "local governments are seeking language that assures the state will place a priority in 2013 when it repays them the money, so that they can obtain loans from Wall Street to cover that loss." This is needed because as it was discussed previously local governments were behind schools for repayment.

So it appears that the Legislature and the Governor do not expect to be able to begin repayment before 2013-2014. And, of course, this revenue shift may also be needed for 2010-11.

Which raises the interesting question about school funding. Under the Constitution, the State owes schools $1.5 billion for 2007-08 budget cuts. Apparently the compromise proposal will be to pay schools an extra $9.5 billion in future years to repay cuts made in 2007-08, 2008-09, and 2009-10. This is being discussed in the context that things will not be quite as bad in 2010-11 as they are today.

As proposed, the "balanced budget" involves increasing income tax withholding schedules by 10 percent to shift money from 2010-11 to 2009-10, as well as delaying state worker paychecks next June 30 to July 1. That cannot be repeated next year, so that extra "income" will not be available to balance the 2010-11 budget.

The "balanced budget" will also involve a one-time 15% reduction in California's motor vehicle fleet including a used vehicle sale. Somehow this is going to represent a gain of $24.1 million this year. Presumably that will mean the State will not buy at least some replacement vehicles this year which will reduce the income to auto dealers. In any case, this will result in a reduction in activity that would have occurred in the private sector car market.

The governor also wants executive authority to sell office buildings that the state would lease back. That would, of course, represent a one time revenue source and a long-term increase in expenses.

The budget proposal effectively institutionalizes the Governor's "temporary" three day unpaid furlough plan for state employees, which saves 15% in salary and wage costs on some positions or about $1.3 billion. The report is that the Governor would "reduce the number of furlough days if the economy improves and the state takes in more revenues." Since the Legislature and Governor know that the earliest they will be able to repay the "borrowed" local government money will be in 2013-14, it is likely that these "temporary" furloughs will be in effect for at least three years.

This is all in the context of a huge deficit in the Unemployment Insurance Fund financed by loans from the federal government that must be paid back, and with interest accumulating, beginning in September 2010 from employer unemployment insurance contributions that must also cover current current claims and build a reserve for the future. That is, of course, essentially impossible as layoffs in both the public and private sector continue.

What is the State going to do once employment starts to rebound? Tripling unemployment insurance costs for employers would be the only way to handle this burden which would, of course, result in fewer employees working which would result in reduced unemployment insurance payments. In the past few years it was known that the rates collected were too low, but no one wanted to make it more expensive for employers while the economy was booming.

In the meantime, health and welfare programs are going to be hit with some significant reductions, though at this time it is unclear how large.

The Healthy Familes program that provides health care coverage for children whose families make too much to qualify for Medi-Cal, but not enough to pay for private health insurance began placing new applicants on a waiting list even as more families fall into that class when one wage earner in the family loses both a job and health insurance. Given the current economy, reports indicate that up to 400,000 children might not be able to be covered.

Also part of the proposed budget is to cut prison costs. This could include early release of prisoners. The numbers involved are still being negotiated.

And then there are the odd proposals.

One is an oil lease off the Santa Barbara Coast. It is being presented as a revenue source. But in reality, it is part of a negotiation to get Republican votes for a 9.9% oil severance tax which could generate billions along with the lease revenue. Environmentalists are livid, of course.

Another odd item on the table is whether to eliminate the state's high school exit exam. It's indicative of how deep the cuts reach into the policies of the state in ways that may surprise people.

Finally, it is clear that all of this effort likely will not balance the budget. It was noted here Friday that "one can easily project that the State General Fund as now configured for fiscal year 2009-10 likely is out of balance by at least $34 billion." However, the National Conference of State Legislatures latest report on the status of budget problems across the nation singles out California.

California deserves special mention because of the sheer size of its gap (in FY 2009 as well) and the moving target that it presents. California's initial budget gap for FY 2010 was $24.8 billion. That gap, along with a $14.8 billion gap for FY 2009, was resolved in a February 2009 budget agreement—except that it wasn't. The resolution included five ballot measures, representing about $5.8 billion of the fix, that failed to get voter support in a May special election. Adding the $5.8 billion unresolved figure to the amount of the gap that was closed ($18.9 billion), plus the newest gap ($14.2 billion) that officials expect because of declining revenues, California's cumulative FY 2010 gap explodes to a whopping $38.9 billion or 35 percent of the general fund budget.

The Governor and the Legislature are trying to close a $26 billion deficit. That appears to be about $10 billion short. The Sacramento Bee reported today:

What that means is unclear. Adopting a budget theoretically would give the State the ability to issue revenue anticipation notes which would provide Chiang with cash. He would be able to redeem the IOU's (Registered Warrants) when they come due in October. And he can pay bills, for how long nobody knows.

Wildfire season is underway now. Maybe it won't be as bad as the past few years or as expensive.
Posted by Michael O'Faolain - at 4:43 PM

Email ThisBlogThis!Share to TwitterShare to FacebookShare to Pinterest
Labels: wildfires