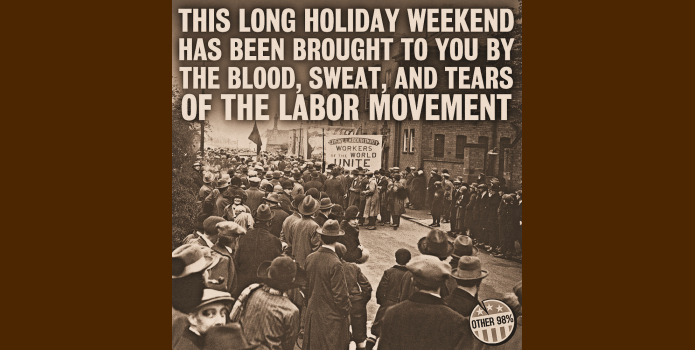 If you check your TV schedule for Labor Day weekend, you won't find an annual PBS show recognizing American workers. Nor will you find any national broadcast coverage of parades or fireworks or memorial day type ceremonies honoring workers who died advocating labor causes.

But then again, you won't see either Bernie Sanders or Donald Trump leading a celebration despite the fact that angry American workers were their base of support.

The American Labor Day Holiday was literally given to you to smooth over the killing of American workers on strike by U.S. Government officials. In 1894, President Grover Cleveland pushed Congress to establish the holiday as a way to reduce class tension following the Pullman Strike. During that strike thousands of United States Marshals and 12,000 United States Army troops were called out to suppress the strike and about ninety workers were gunned down.

Cleveland’s choice to establish Labor Day in September deflected attention away from another explosive labor action — the Haymarket massacre of 1886, where the deaths of American workers did contribute at least one lasting legacy to the international movement for working-class liberation — a workers’ holiday, May Day, celebrated around the world on May 1.

Tied to the socialist movement, May Day as a national holiday was unacceptable to the American Establishment of the late 1800's. But a response from the Government over the Pullman Strike deaths was needed, so Cleveland selected what we now celebrate as Labor Day in the hopes that working Americans would be mollified and someday forget the labor movement.

But that didn't happen rapidly. Thirty years later, in 1916, Congress passed the Adamson Act creating the first legally enshrined eight hour work day in order to avoid a nationwide railroad strike which would have resulted in deaths. 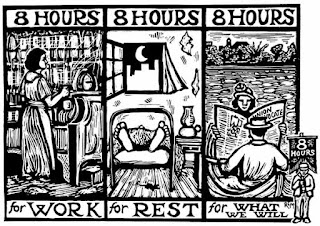 It would take years before most Americans would forget about the meaning of Labor Day - after The Great Depression, beyond the Revolutionary 1960's, really all the way to the 1980's when the Industrial Revolution was replaced by the Digital Revolution.

During the 1980's decade most Americans seem to have decided they had nothing in common with the laboring class, had no need for organized labor, and literally raised a generation that thinks Labor Day exists for stores to sell stuff much like the Valentines Day "holiday." 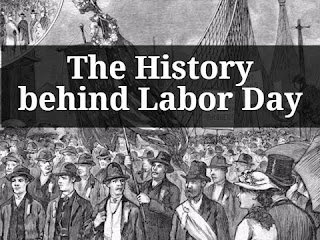 To learn a little more about the history of Labor Day you can read When Labor Day Meant Something and  Labor Day is May 1, today is a boss’s holiday, though you should learn a lot more about what the labor movement struggled to secure for you though that would require reading books. You should at least be aware that there is a Wikipedia entry List of worker deaths in United States labor disputes.

Or you could embrace your ignorance, sit back and enjoy an NPR Jazz Sampler Labor Day Blues And Grooves.

Just keep in mind that the 1% depend upon most workers not understanding that laws like the minimum wage, mandatory overtime, etc., exist not because of some benevolent President but because of the American labor movement. There has always been the 1%, but there isn't much of a labor movement now. Some thoughtful folks might wonder if there is any relationship between that and who benefits from the economic growth....


This post was originally posted in 2016. In 2020 it seems more important than ever to encourage people to think about what benefits the labor movement gave us, beginning with the 8-hour day. Unfortunately, businesses have been allowed to ignore 8-hour day laws by paying a fixed salary and calling workers "professionals" when, in fact, the term means "following an occupation as a means of livelihood or for gain" and union plumbers are professionals paid by the hour.
Posted by Michael O'Faolain - at 1:20 PM