Please note: This very American rebellion isn't in 1791 or 1968 but rather a historical continuation 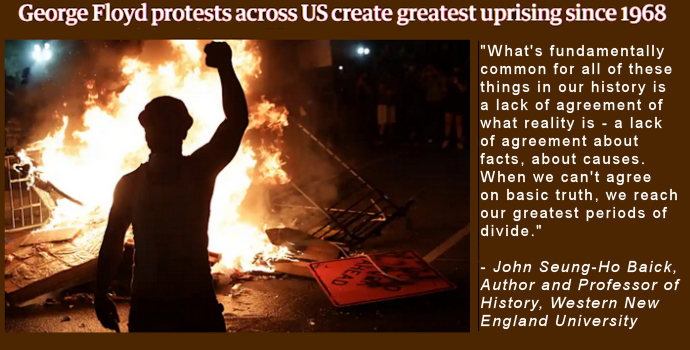 Numerous news sources have begun the process of comparing this year to 1968. An American tendency exists to think of difficult periods in history in terms a specific year or even specific events.

Unfortunately, comparing one-year-to-one-year across history allows Americans to ignore the long trend of our cultural, social, and economic disarray as a not-united people.

In the pre-Trump 2016 post here Dissidents in American Politics: The Authoritarian U.S. President, we noted the Whiskey Rebellion protest by dissidents in the United States beginning in 1791 which ended when then President George Washington rode at the head of an army of 12,950 militiamen provided by the four governors. Because relatively few men volunteered for militia service, a draft was used to fill out the ranks. Draft protests were widespread, and conscription efforts resulted in protests and riots, even in eastern areas.

That was in year 3 of the existence of a not-very-United States. An honest discussion of that protest would have to begin prior to the American Revolution because the Whiskey Rebellion was about taxes, the subject used by American economic interests prior to the Revolution to justify the Revolution - you know, "no taxation without representation."

But there's nobody alive today to reminisce about the times of George Washington. Plenty of us are around to remember 1968, however.

While 1968 was a year of protests, it followed the 1967 Detroit Riots which were among the most violent and destructive riots in U.S. history. By the time the bloodshed, burning and looting ended after five days, 43 people were dead, 342 injured, nearly 1,400 buildings had been burned and some 7,000 National Guard and U.S. Army troops had been called into service. In our household one of us has a personal memory of walking through the 1967 Detroit Riots. It was not abstract, impersonal.

In contrast, for this writer 1968 was a vivid amplification of American failures at the end of WWII regarding Southeast Asia. The outcomes of those failures began to become more intense with the assassination of Jack Kennedy in 1963. That left us with Lyndon Johnson whose weakness was international affairs. Johnson decided not to run for reelection in 1968 because of the protests over the Vietnam War.

In this writer's opinion, the 1967-68 protests and riots along with the assassinations of MLK and Bobby assured the victory of Richard Nixon. Republican Nixon beat Democratic former Vice-President Hubert Humphrey. Humphrey was a nice guy with lots of good experience. Though different, the very experienced former Vice-President Joe Biden offers a certain nice-guy resemblance to Humphrey.

The year 1968 offered another similarity to this year discussed by some news sources along with the riots.

In September 1968 what was labeled as the Hong Kong flu entered California, carried by troops returning from the Vietnam War, but did not become widespread in the United States until December 1968. The disease was allowed to spread through the population without restrictions on economic activity, until a vaccine became available four months after it started. It had a second wave in 1969. Even though its impact was mitigated because a similar Asian Flu strains had been circulating since 1957, it's estimated that it killed up to four million people worldwide (we've had 375,000 deaths from Covid-19 to date with double the total population of 1968).

All of this tends to confuse us about the commonality of the recurring protests - the divide between
We need to be mindful of the statement by U.S. historian John Seung-Ho Baick: "What's fundamentally common for all of these things in our history is a lack of agreement of what reality is - a lack of agreement about facts, about causes. When we can't agree on basic truth, we reach our greatest periods of divide."

Aspiring fascist dictator Donald Trump mines as if it were coal the American propensity to deny facts, causes, truths, reflecting a dangerous preference for beliefs. He intends to use it to energize his campaign and heat up the anger of his core supporters.

In this context liberals and members of the the news media are "carrying coals to New Castle" instead of shutting down Trump's successful publicity effort.