"Dissidents" are people who actively challenge established doctrine, policy, or institutions. This post is the third in a series of 10 posts regarding the confusing "revolutions" of the 2016 Presidential Election. 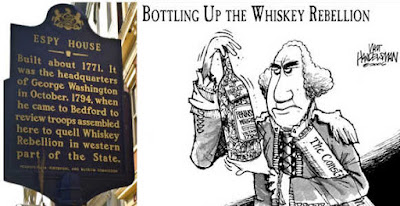 President Andrew Jackson began the Indian Removal Policy which as continued by President Martin Van Buren led to the "Trail of Tears." Subsequent Presidents, as Commander in Chief, continued the genocide of Native Americans over the next 70 years. But the Native Americans weren't the only ones who experienced this fun side of traditional American bigotry.

Religious discrimination has been supported by the authoritarian use of power by a President. The Mormons are well aware of the tradition of authoritarian Presidents as their forebears experienced it as religious discrimination.  The religion's Joseph Smith and his brother Hyrum were killed by a mob in Carthage, Illinois, and the alleged murderers were found not guilty by a trial jury was composed exclusively of non-Mormons after the judge dismissed the initial jury, which included Mormons. 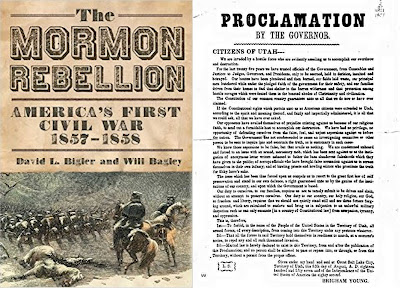 To make a long story short, the Mormons moved to the Utah Territory and established a territorial government. Because of a great deal of rumor and innuendo, in 1857 U.S. President James Buchanan sent an army to Utah resulting in the Utah War.

(President's George W. Bush and Barack Obama both worked to avoid the rapid expansion of this kind of religious bigotry toward Muslims.This contrasts with Donald Trump's successful effort to capitalize on the bigotry within America using a promise that isn't far from Buchanan's attitude - a traditional American attitude of religious bigotry that, right behind racial bigotry and ethnic bigotry, has always been the third core element of the American truth, as opposed to the American myth)

When does the use of violent force by the established government become authoritarian in conduct. Juan Linz's influential 1964 description characterized authoritarian political systems by four qualities:
Abraham Lincoln's Republican Presidency clearly fit that description. So let's take a look at the Civil War, not as Northern lefty intellectuals nor Southern Klan members, but as open minded truth seekers.

It could have have been avoided, but Americans in the North had latched onto a goodness versus evil belief system about the institution of slavery that ignored the Three-Fifths Compromise part of the U.S. Constitution permitting states to maintain the legality of slavery.

(As an aside, if you think the rule of law is critical, than you would have supported slavery. If you believe in the recently invented moral absolute that human slavery is unacceptable even though we know it was a continuously accepted human condition dating back to at least 8000 BC, than you would have supported killing 1 million Americans to free 4 million slaves. Absolutes in morality are such fun things.)

(As an aside, today we have anger because a large minority of the U.S. population embraces beliefs contrary to the status quo beliefs of another large minority of the U.S. population which has created a high level of fear for personal wealth and well-being is created. The solution, of course is for these folks to defend their beliefs irrationally in some manner comparable to the 1860's, justifiably killing 10 million Americans at random.)

Prior to Lincoln assuming the office of President, negotiations over the issues were moving forward. On December 18, 1860, the Crittenden Compromise was proposed to re-establish the Missouri Compromise line by constitutionally banning slavery in territories to the north of the line while guaranteeing it to the south. Here is the map they were arguing over. Red states were slave states, blue states were free states, the green line is the Missouri Compromise line. The gray indicates territories that would become states. 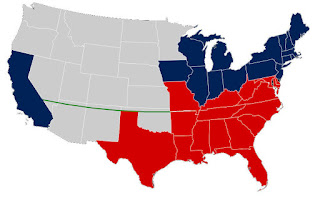 The adoption of this compromise likely would have prevented the secession of every southern state apart from South Carolina, but Lincoln and the Republicans rejected it.

It was then proposed to hold a national referendum on the compromise. The Republicans again rejected the idea, perhaps because they knew a majority of both Northerners and Southerners would have voted in favor of it. (This self-righteous minority group also self-swaddled themselves in ignorance choosing to believe that even if there was a Civil War it would be over in months - something anyone informed about the other side would never have believed.) 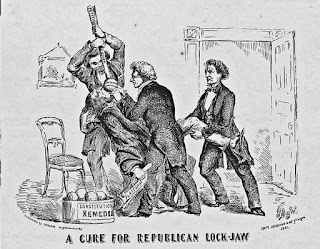 By the definition discussed in a previous post, Lincoln's Republicans were Romantic Populists who believed "virtuous" people were being mistreated by a small circle of elites wrongly holding economic power.

History has been so twisted that it is not bothersome to most Americans that with an 82.2% voter turnout, Lincoln won with only 39.9% of the popular vote but still led Americans into a Civil War assuming authoritarian powers and refusing compromise.

Lincoln is an American hero who could be a model for authoritarian action for Donald Trump's deportation program.  In case you didn't know this, here is a history lesson:


In 1861, John Merryman, a state legislator from Maryland, was arrested for attempting to hinder Union troops from moving from Baltimore to Washington during the Civil War and is held at Fort McHenry by Union military officials. His attorney immediately sought a writ of habeas corpus so that a federal court could examine the charges. However, on May 25, 1961, President Lincoln suspended the right of habeas corpus in the United States, and the general in command of Fort McHenry refused to turn Merryman over to the authorities.

The chief justice of the Supreme Court Roger Taney issued a ruling that President Lincoln did not have the authority to suspend habeas corpus. Lincoln didn’t respond, appeal, or order the release of Merryman. But during a July 4 speech, Lincoln was defiant, insisting that he needed to suspend the rules in order to put down the rebellion in the South.

Five years later, a new Supreme Court essentially backed Chief Justice Taney’s ruling. In an unrelated case, the Court held that only Congress could suspend habeas corpus and that civilians were not subject to military courts, even in times of war.

This was not the first or last time that a U.S. President imprisoned Americans at will. Pursuant to Executive Order 9066 issued by another revered President, Franklin Roosevelt, hundreds of thousands of Japanese Americans were sent to internment camps and denied the right to a writ of habeas corpus.

Indeed if a President Trump were to imprison Muslim Americans after persuading Congress to declare war on ISIS, he could become a revered hero like the extremely authoritarian Presidents Lincoln and Roosevelt.

Looking at the Crittenden Compromise map, in hindsight many argue that slavery would have ended without the Civil War but not for a number of decades. If so do you think those decades were worth the 1+ million casualties? Without arguing about what the people thought at the time, what does it say about you if you believe the Civil War was justified?

It doesn't matter because a minority Party of an authoritarian President rejected compromise thereby initiating the killing 620,000 soldiers and tens of thousands of others, all Americans fighting because of the true believers and the truly fearful.

By the time the Civil War was over, authoritarian actions of Presidents had been validated beginning with Washington and continuing until Lincoln who gave a permanent home in the Presidency for what is clearly defined as authoritarianism.

Of course, in the end the Civil War was a testing ground for modern total warfare. Total war is warfare that is not restricted to purely legitimate military targets, and can result in massive civilian or other non-combatant casualties. Americans perfected it in WWII.

Since that worked so well, following the model of the authoritarian U.S. Presidency, domestic police forces now use a variation on that technology (robots carrying small bombs) within the United States to kill alleged terrorists. It's far less of a video media embarrassment than all those police in body army carrying assault weapons riding around suburban Boston in armored military vehicles.

Just think. Instead of shooting all those holes in that bystanders boat and not killing the suspect, resulting in a long expensive trial, they could have just blown up the suspect and the boat. Soon we won't need to worry about all those Constitutional rights. After all, the Presidents don't.

The authoritarian U.S. Presidency has become an accepted tradition. Since the Civil War, as examples we've had:
For an analysis of how this expansion of Presidential powers has continued in more recent times, read The Washington Post article Donald Trump and the expanding power of the presidency.

Perhaps one thing needs to be made clear. An Authoritarian Revolution strikes at the heart of a democratic republic government which depends upon compromise in the recognition that the give-and-take in such a political system is a substitute for violence being used to secure a preferred outcome (such as killing a million people in the Civil War).

In the United States there usually is a block of reasonable citizens, about 40% of the voters, who at some level understand and prefer that give and take decision-making system. A problem arises, however, when the system is hijacked and brought to a halt.

In the past 20 years the Mythical Reactionaries, never representing more than a small minority of Americans, frequently have succeeded in bringing that give-and-take system to a halt. At that point, the patience of the reasonable citizen erodes, and some of those 40% of the voters become unenthusiastic Mythical Reactionaries or Romantic Populists.

A further review of the four groups of people can help understand our political system. But first, we need to examine recent developments in our economy that have amplified the likelihood of an authoritarian Presidency.
Posted by Michael O'Faolain - at 10:56 PM